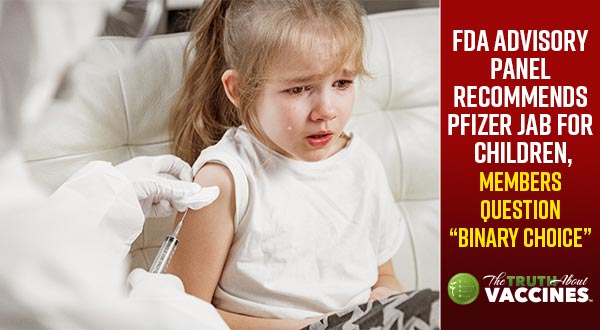 The vote comes on the heels of Pfizer’s declaration last week that their COVID jab is “safe” and generates a “robust” antibody response in children ages 5 to 11. The trial included 2,268 participants ages 5 to 11 and used a two-dose regimen of the vaccine administered 21 days apart. This trial used a 10-microgram dose – smaller than the 30-microgram dose that has been used for those 12 and older.

“The 10 microgram dose was carefully selected as the preferred dose for safety, tolerability, and immunogenicity in children 5 to 11 years of age,” Pfizer said in a news release. “Further, the COVID-19 vaccine was well tolerated, with side effects generally comparable to those observed in participants 16 to 25 years of age,” the company said.

But analysis of medical data suggests that boys aged 12 to 15, with no underlying medical conditions, are four to six times more likely to be diagnosed with vaccine-related myocarditis than ending up in hospital with Covid over a four-month period.

At current US infection rates, the risk of a healthy adolescent being taken to hospital with Covid in the next 120 days is about 44 per million, they said. This means that healthy boys are between 214% and 369% MORE LIKELY to be hospitalized because of the “vaccine” than from the virus.

The Vaccines and Related Biological Products Advisory Committee (VRBPAC) voted 17-0, with one abstention, that the benefits outweigh the risks of the jab in the younger population. But several committee members took issue with the restrictive nature of the recommendation.

Several members of the committee expressed irritation at the “binary choice” of either voting “yes or no” on the recommendation, as opposed to a more nuanced recommendation. However, Peter Marks, MD, PhD, director of FDA’s Center for Biologics Evaluation and Research (CBER) charged VRBPAC at the beginning of the meeting that their job was not to decide who would get the shot within the population, nor to discuss or consider vaccine mandates.

Michael Kurilla, MD, PhD, of the NIH National Center for Advancing Translational Sciences, was the one abstention. He pushed for more nuance in the question, namely alternate dosing for the children with prior COVID infection.

And that’s important when it comes to informed consent. We now know that natural antibodies in those who have been exposed to the virus are more effective and longer-lasting than those provided by the Pfizer elixir.

Ultimately, the committee was swayed by the idea that if they did not vote to recommend the vaccine, it would not be available to children with high-risk medical conditions or medically vulnerable children in need of protection.

“If we try to approve this for some subset of the group, that could potentially lead to a situation where this becomes a vaccine that gets used more” by those of higher socioeconomic status with access to it, Marks noted.

“I understand why the question was asked that way, but I certainly don’t like it,” said Michael Nelson, MD, of the University of Virginia School of Medicine in Charlottesville. He added that a model of shared clinical decision-making with “risk-informed” parents and their healthcare providers made the most sense to him.

And that’s exactly what we’ve been pushing for. Americans should not be forced to “co-parent” with the government. Administering an experimental drug without notifying both the medical professionals and the patients is a violation of the Nuremberg code of ethics.

It’s also important to understand that these independent advisory panels are often riddled with conflicts of interest. We’ve documented time and again how the regulatory bodies in America are controlled and corrupted by the very industries they’re meant to oversee.

When a new therapy is up for FDA approval, advisory committees are formed to review the new drug and vote on whether or not it should be approved. The FDA virtually always follows these recommendations.

But a look into the finances of these committee members paints a more malevolent picture. More often than not, the physicians and scientists who sit on these advisory boards end up taking money from the very companies relying on their votes. These bribes are thinly-veiled as “consulting fees,” “travel compensation,” or “research grants.”

According to sciencemag.org, “An analysis of pharma payments to 107 physicians who advised FDA on 28 drugs approved from 2008 to 2014 found that a majority later got money for travel or consulting, or received research subsidies from the makers of the drugs on which they voted or from competing firms.”

We’ve seen what happens when these dangerous, experimental shots are given Emergency Use Authorization. Governments and businesses begin offering incentives for getting the jab, massive propaganda campaigns are launched to assure the public that the drugs are “safe and effective,” and anyone who questions the official narrative is censored.

Once the “carrot” approach is maxed out, the corrupt FDA will grant “full approval,” and the mandates and segregation begin. We’ve seen how aggressively schools will work to prevent parents from opting their children out on religious, medical, or philosophical grounds.

Although few states allow minors of any age to consent to such services, several states mirror existing research on capacity to consent, granting minors autonomy at or around age 14 years. Court intervention may also grant a “mature minor”—adolescents who, after clinical evaluation, are deemed to possess competence to consent or refuse treatment—broad authority over their medical decisions… regardless of the risk.

Over 50 studies gathered by the Collaborative Group on Hormonal Factors in Breast Cancer indicated that women using contraceptive pills are more susceptible to breast cancer than women who don’t take contraceptives. Research published in 2011 in the journal Cancer Research significantly linked breast cancer to taking the pill. But in most states, children can receive birth control pills without their parents’ knowledge.

You can expect the FDA to grant EUA status for Pfizer’s latest concoction for children as young as 5 in the next few days. You can expect school boards to start creating incentives and launching propaganda campaigns as early as next week. Once the jab is “fully approved,” you can expect that your child will not be allowed in a school, daycare, park, or Chuck-E-Cheese without proof of vaccination.

The fight for our children’s future is right here, right now. Start calling your school board members and local representatives. Support candidates that will protect your sacred parental authority above the will of the pharmaceutical machine. Do not comply with unlawful orders. Get loud.