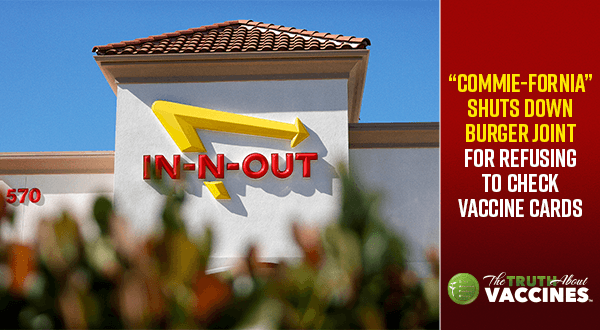 In the new Orwellian future of vaccine passports and global digital currency, it won’t be stormtroopers asking to see your papers: it’ll be your local fast food cashier. Or at least that’s how California would have it.

An In-N-Out restaurant in California was forced to close after refusing to enforce Covid-19 vaccination rules. Health officials in Contra Costa county indefinitely shut the Pleasant Hill location of the popular burger chain on Tuesday after it ignored repeated warnings to verify that customers who wanted to dine indoors had vaccination cards or proof they had tested negative for the virus in the past 72 hours.

This is the second time in a month that one of the burger joints has been shut down for refusing to play vaccine gestapo. The first occurred on San Francisco’s Fisherman’s Wharf, when the city’s only In-N-Out location was closed for several days in October for similar “violations.” A company executive described the shutdown as a “clear government overreach.”

“We refuse to become the vaccination police for any government. It is unreasonable, invasive, and unsafe to force our restaurant associates to segregate customers into those who may be served and those who may not,” In-N-Out said in a statement.

“We fiercely disagree with any government dictate that forces a private company to discriminate against customers who choose to patronize their business,” Arnie Wensinger, the company’s chief legal and business officer, wrote.

The location on Fisherman’s Wharf is supposed to be open only for carry out and outdoor dining, but San Francisco’s health department is currently investigating a complaint from a local “good German” that the fast food favorite is still offering indoor dining.

Founded in California in 1948, In-N-Out now operates 334 locations in 6 different states. But as the chain continues to battle with its home state, other suitors have come calling.

The chief financial officer of Florida, Jimmy Patronis, joined “Fox & Friends First” on Thursday to invite the company to open its doors in Florida, while touting the opportunity the state could provide if the business chooses to accept the invitation.

“I applaud the courage that [In-N-Out owner] Lynsi Snyder has shown, but I know this, Lynsi, what I can offer you in my commitment on behalf of the state of Florida is you’re going to be in a mandate-free state,” Patronis explained.

“I know this: it would never happen in the state of Florida. But mark my words; just like Tesla left the state of California because of overregulation, you’ll see In-N-Out Burger move out of the state,” Patronis stated.

“We love to see businesses prosper and flourish in our state,” he said.

Home to nearly a million residents, San Francisco is averaging around 50 positive tests per day and zero deaths so far this month. Their precious vaccination rate is over 80%. And yet, there’s still an unreasonable push for strict mask mandates, vaccine passports, and capacity limits on private businesses.

And who is California asking to stand on the front lines of this tyrannical crusade, demanding to see your papers and refusing service based on your medical history? The minimum-wage, 17-year-old, “essential worker” who has been dealing with massive upticks in drive-thru and delivery orders and forced to wear a mask all day.