You are here: Home / Medical Tyranny / Biden’s Vax Mandates Are NOT Going Well 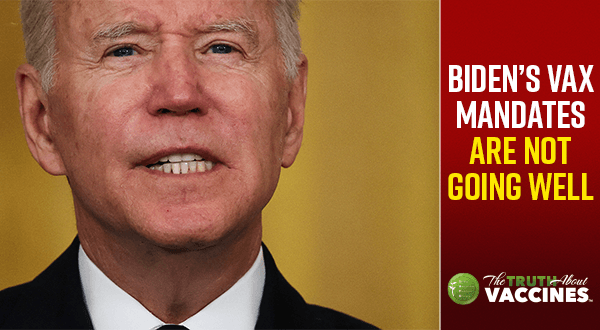 It’s been almost 2 months since Joe Biden announced sweeping vaccine mandates that would impact all federal employees and contractors as well as companies who employ at least 100 people. Unfortunately for Biden and the globalist agenda, things have not been going well.

Yesterday, D.C. district court judge Colleen Kollar-Kotelly issued a temporary restraining order that prevents both civilian and active-duty military plaintiffs from being terminated after they sued the Biden administration over religious exemptions to COVID-19 vaccines.

“None of the civilian employee plaintiffs will be subject to discipline while his or her request for a religious exemption is pending,” Kollar-Kotelly ordered. She also ruled that “active duty military plaintiffs, whose religious exemption requests have been denied, will not be disciplined or separated during the pendency of their appeals.”

Twenty plaintiffs sued Biden and members of his administration in their official capacity over the Sept. 9 executive order mandating vaccines for federal employees, according to civil action filed earlier this week.

You can check out the entire complaint here:

At least 1,200 Air Force personnel have already refused to take the COVID jab as of Friday, leaving the military force in a pickle. Officials had warned that if military personnel do not receive the COVID-19 vaccination, they will be subjected to punishment, including possible dismissal from service or receiving a charge from the military justice system. The deadline to comply is next Tuesday.

But with such a large number already standing in defiance, officials are faced with two choices: Back up their threats of discipline and dismissal (possibly facing serious setbacks within units that should be ready for a crisis), or tuck tail on their previous mandates, setting a precedent of weakness when it comes to enforcing arbitrary executive orders.

“The fact that it’s a choice leading to potential loss to readiness is striking,” said Katherine L. Kuzminski, a military policy expert at the Center for a New American Security. Even those who avoid the jab and exit the Air Force may have trouble finding civilian work given the mandate for federal employees or government contractors.

Then again, maybe they should just work in D.C…

In Florida, Governor Rick DeSantis sued the Biden administration over its vaccine mandate for federal contractors in a lawsuit alleging the president overstepped his legal authority.

“The federal government is exceeding [its] power and it is important for us to take a stand because in Florida we believe these are choices based on individual circumstances,” the Republican governor said in a statement.

The 28-page lawsuit, filed in federal court in Tampa, argues that the administration has no legal grounds to mandate such a sweeping requirement and that Biden’s rule violates procurement law.

In Missouri, Governor Mike Parson has issued an executive order in an effort to block the federal power grab. Governor Parson said on Thursday that his administration won’t help enforce Biden’s federal COVID-19 vaccine mandate in some limited instances. He announced an executive order Thursday:

We have issued Executive Order 21-10 to protect the individual rights of Missourians against overreaching federal COVID-19 vaccine mandates. pic.twitter.com/iXJkiwjjWP

In our home state of Tennessee, Governor Bill Lee has called a special session of the state legislature in which a Republican supermajority are intent on limiting the ability of school boards, district attorneys, private businesses, local health officials, and even the governor himself when it comes to mask mandates, vaccine requirements, or other COVID-related restrictions.

At Least He Tried

You’ve gotta give the old man some credit. Despite plummeting approval ratings, ongoing disasters in Afghanistan, a border crisis that he refuses to acknowledge, and national pushback against his executive orders and mandates… at least he’s trying. This man truly believes in tyranny and the new world order, and he won’t give up the fight no matter how bad the odds.