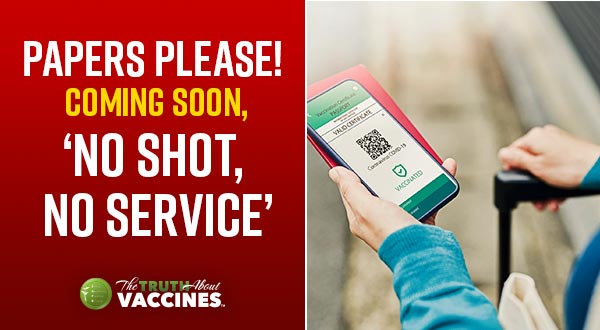 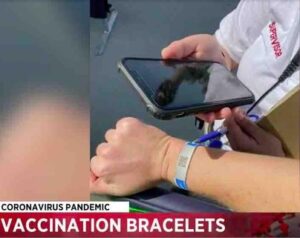 Did you hear about the new vaccine bracelet being sold? That’s right. You can wear it in public so people will know that you’re safe to be around. I wish I were joking.

This is what they’re selling. Avoid fellow citizens, fear half the population. Way to go liberal media activists. Then there’s NY Governor Andrew Cuomo who plans to segregate baseball stadiums into vaccinated and unvaccinated sections. Let’s see, divide people even more – what could go wrong?

Writing for Harbinger’s Daily, prophecy watcher, Chad Thomas shared some concerns many of us have warned about. We’re upset about government overreach and the loss of our freedoms, yes, but it will be corporations, airlines, and private businesses that will practically force you to take a vaccine. People won’t be able to buy, sell, or travel without it.’”

More on this in a minute. Did you ever think these things would be happening at such breakneck speed?

First, let’s clarify. We’re not being reckless by asking legitimate questions about more research and studies, or by wanting accurate statistics on all things Covid. We’re not denying people’s serious concerns or those with major health vulnerabilities. People have died, government has lied.

The virus itself is very real. But the fear mongering, progressive push wrecking our country’s economy, and the suffocating of our freedoms should wake us all up. The agenda behind it all is pushing us closer to a new world order. It’s a globalists dream.

So, this vaccination bracelet inventor says his device tells the powers that be, ‘I support the vaccine effort, I’ve been vaccinated, I’m safe to be around.’

It’s called the ImmunaBand, and for about twenty bucks, you can feel superior to others and have your vaccine records immediately accessible. So rather than authorities demanding to see your papers, they ask to see your wrist band.

The inventor, Dr. Toshof Bernton of Denver, said people in the travel and restaurant industry are getting the bands for their employees.

In March, Gov. Cuomo announced a pilot program for a COVID-19 electronic passport that would allow people entry to public venues. TheBlaze reported last week that a growing number of NBA and MLB franchises will be asking for “vaccine passports” as they reopen their venues.

Several GOP governors have already banned vaccine passports in their states, but this shouldn’t be a political issues. And yet – sadly, it is.

Some of us saw this coming, but when will we reach a tipping point? We are bombarded by billboards, social media ads, and TV commercials telling people to get the shot and save lives. If you care about human beings, do the right thing; mask-up, social distance, get the vaccine, wash, rinse, repeat.

But where’s the balanced and honest reporting on the thousands who have died after taking the experimental gene therapy? Where’s the science justifying masks and forcing vaccines on young children? Hundreds of colleges are now requiring students to be vaccinated regardless of the fact only about 0.1% of all COVID deaths have been 15-24 year-olds.

This is neither wise nor constitutional. Writing about vaccine passports and the mark of the beast described in Book of Revelation, Chad Thomas states:

…the mask-wearing, coming vaccine ID cards, and vaccine passports are all part of the agenda to condition people to eventually accept this mark; …It has been close to a year of mask-wearing now, with mask mandates sweeping the Globe. In most countries, there are federal penalties for disobeying Government mandates. The bottom line is people want their lives back.”

But we may have to get used to freedoms with conditions and restrictions. In other words, discrimination and even persecution. And if you don’t blindly follow the crowd; if you disagree or try to simply speak the truth, you will be banned, censored, or canceled. Read my report from last week.

Keep it all in perspective. This life is a vapor. Take your stand on Christ and then for the truth, even if you feel you’re standing alone. You have no idea who is watching how you respond and whose faith might be strengthened by your example.

These tests and trials are temporary. So are the sufferings of this present time, and the Bible says they are not worth comparing with the glory that is to be revealed to us. Jesus is making all things new, and when He returns, what we’re going through will be quickly forgotten and will fade into eternity.

←
Previous
[VIDEO] Putting Our Kids First: A Look At COVID-19 School Guidelines And How They’re Affecting Our Children
→
Next
Woman Who Nearly Died After J&J Vaccine Stuck With $1 Million Medical Bill, Says Government Should Pay 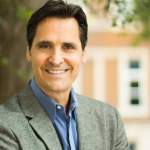 David Fiorazo is an author, associate pastor, media contributor, and radio personality. He has been involved in the broadcasting industry for over thirty years, and in Christian ministry for over twenty five years.