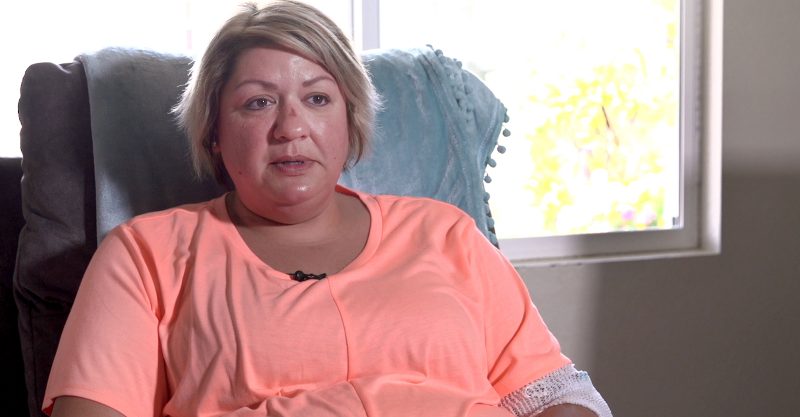 Kendra Lippy was a healthy 38-year old woman — until she got the Johnson & Johnson (J&J) COVID vaccine. Within about one week, she began experiencing headaches, abdominal pain and nausea.

Lippy was diagnosed with severe blood clots that subsequently sent most of her organs into failure. She also was left without most of her small intestine — and with crippling medical bills that she said the federal government should compensate her for.

Lippy’s case was one of the six that led federal agencies to temporarily pause the J&J shot in mid-April. Her blood clots developed in March. She was hospitalized for 33 days, including 22 days of intensive care.

Lippy now is in occupational and physical therapy, and is working to regain basic functions, such as walking 20 minutes at a time or climbing stairs. She had to relearn fine motor skills, including writing and using a fork, and she had to relearn how to walk. She is reliant on total parenteral nutrition (TPN), a feeding method that bypasses the gastrointestinal tract.

“I’m always going to have this disability … that’s going to limit what I can eat and limit … some activities that I can’t do anymore,” Lippy said. “Right now, I know it’s hindering me being able to go back to work, which is what I want to do. I’m not a stay-at-home person. I’m not somebody that’s gonna sit still, it’s just not me. I have to do something.”

Part of her road to recovery includes figuring out how to pay her extensive medical bills, which add up to more than $1 million.

Lippy wants to see a federal compensation system that is fair to her and others who are harmed by COVID vaccines. Because the government shielded vaccine makers from liability, she can’t sue J&J, KRDO reported. She also doesn’t have a legitimate legal route to sue the government.

The only current option for people who have suffered COVID vaccine injuries is the Countermeasures Injury Compensation Program (CICP), which turns down most applicants. Fewer than one in 10 people receive compensation after applying.

The CICP was created so an individual who experiences a serious injury from a covered countermeasure can be considered for benefits. According to the Health Resources and Services Administration, a countermeasure is a vaccination, medication, device or other item recommended to diagnose, prevent or treat a declared pandemic, epidemic or security threat.

In order to get compensated by CICP, people alleging harm must file within one year of getting a vaccine, according to the program’s website. Administrative staff within the countermeasures program then determine who receives benefits. Staff also review appeals.

As The Defender reported in March, CICP is similar to the National Vaccine Injury Compensation Program (NVICP) — the government compensation system set up for non-pandemic vaccines that provides an open court process, compensation for pain and suffering and a longer window to apply.

However, there are important differences between the two programs, which make it more difficult to get compensation through CICP than through NVICP.

For example, while the NVICP pays some of the costs associated with filing a claim, CICP does not — vaccine-injured individuals are responsible for their own attorney fees and expert witness fees.

As reported by Dr. Meryl Nass, the maximum payout under CICP — even in cases of permanent disability or death — is $250,000 per person. Even then, CICP pays nothing until an individual’s private insurance compensation has been exhausted.

The CICP is administered within the U.S. Department of Health and Human Services (DHHS), which also sponsors the COVID vaccination program. This conflict of interest makes CICP less likely to find fault with the vaccine, The Gazette reported.

If a CICP claim is denied, the only route of appeal is within the DHHS, where the case is  reviewed by another employee. The DHHS is also responsible for making the payment, so the DHHS effectively acts as judge, jury and defendant.

According to data from CICP, more than 701 claim filings since 2010 have been received from individuals requesting compensation for injuries. Of the 701 claims, only 29 claims were compensated totaling $6 million. Another 452 claims were deemed ineligible. There are 210 cases pending.

As of May 26, CICP had received 152 claims involving COVID vaccines, and 293 involving other treatments, said David Bowman, spokesman with the U.S. Health Resources and Services Administration.

The CICP does not compensate anyone for non-economic damages, such as pain, suffering and disfigurement, said Stephen Justino, Lippy’s lawyer.

Attorney Renée Gentry, director of the Vaccine Injury Litigation Clinic at George Washington University, said Congress must act to allow COVID vaccine claims to go through a more transparent process. Gentry said that would be the easiest way to ensure the system is fair for people like Lippy.

Gentry expects Congress will allow a more transparent process eventually, but it may not help people like Lippy who have already been injured, she said.

According to Bowman, in order for the NVICP system to accept COVID vaccination injury claims, the vaccines must be recommended for children and pregnant women and must meet specific criteria.

Patients hurt by measles, flu and other common vaccines can apply for compensation through the NVICP. However, the NVICP is facing a large backlog of 4,000 cases alleging vaccine injury — and there are only eight people employed to judge them, Gentry said. It can take two years to get a trial scheduled and a year just to get an opinion, she added.

“We should also have a system that fairly treats the people who take the risk that society needs them to take,” Justino said.

According to data released Friday by the Centers for Disease Control and Prevention’s Vaccine Adverse Events Reporting System there have been 262,521 reports of adverse events following COVID vaccines, including 4,406 deaths and 21,537 serious injuries between Dec. 14, 2020 and May 21, 2021.

Catherine Austin Fitts, president of Solari, Inc. (which publishes the Solari Report), and managing member of Solari Investment Advisory Services, wrote the “Family Financial Disclosure Form for COVID-19 Injections,” a downloadable form families can use to assess the potential financial risks of being injured by a COVID vaccine.

Fitts told The Defender the form was inspired by Children’s Health Defense Chairman Robert F. Kennedy, Jr., who asked her to write about the absence of information in informed consent disclosure on the potentially devastating financial impacts of adverse events related to vaccinations in general, including COVID-19 injections.