You are here: Home / Medical Tyranny / FDA Set to Approve Pfizer Jab 17 Months Ahead of Schedule 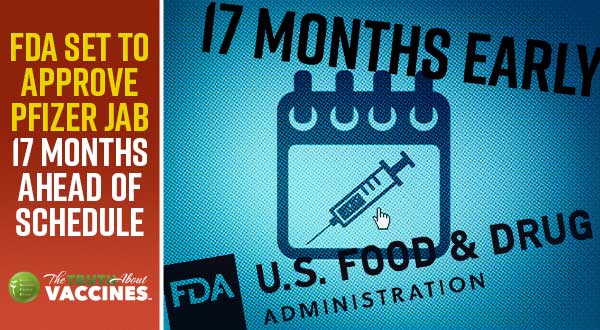 In the furious rush to vaccinate every man, woman, and child on the planet, the FDA plans to expedite approval for the Pfizer/BioNTech COVID-19 vaccine. This would make it easier for governments and businesses to force the jab, despite the fact that preliminary safety studies won’t be completed until the end of January 2023.

To date, all of the COVID-19 “vaccines” currently available in the U.S. have been made available under Emergency Use Authorization (EUA). Despite a recent opinion by the Department of Justice that vaccine mandates under the EUA are legal (they’re not), the fight for medical freedom may become significantly more difficult once the shots gain formal FDA approval.

Here’s what you need to know.

The FDA has accelerated its timetable to fully approve Pfizer-BioNTech’s coronavirus vaccine, aiming to complete the process by the start of next month, people familiar with the effort said.

Joe Biden said last week that he expected a fully approved vaccine in early fall. But the F.D.A.’s unofficial deadline is Labor Day or sooner, according to multiple people familiar with the plan. The agency said in a statement that its leaders recognized that approval might inspire more public confidence and had “taken an all-hands-on-deck approach” to the work.

One of the biggest concerns for those who have avoided the jab has been safety. The MrNA injections were fast-tracked, skipping many of the standard phases for pharmaceutical testing and instead launching straight to human trials.

Currently, the “subjects” (i.e. guinea pigs) of the study are the American people – over 160 million of them. Despite guidelines outlined in the language of the EUA, skyrocketing incidents of injury or death reported on the CDC’s Vaccine Adverse Event Reporting System (VAERS) have largely been ignored.

While testing standards for vaccines are substantially more relaxed than any other pharmaceutical (new vaccines are routinely tested against confirmed dangerous ones in order to arrive at what appear to be positive outcomes), many Americans still feel that FDA approval is an indication that the shots are “safe and effective.”

But even the paltry studies required for such approval aren’t scheduled to conclude until the end of January 2023. Nevertheless, the FDA has set its sights on full approval that could arrive within the next 30 days.

The argument being made in the mainstream media is that the FDA should “accelerate its effort” to review the vaccine for approval. But how can the FDA review safety data that doesn’t exist? According to NPR, many of the study’s participants who had been in the placebo group have now opted to take the vaccine.

The trial also skipped over animal studies in favor of testing directly on humans, a dangerous precedent. And with current vaccine mandates for Federal workers, military personnel, and millions in the private sector, we’re now in clear violation of the Nuremberg Code. Established in 1947 after the atrocities committed by the Nazi regime in the name of “science,” the Nuremberg Code outlines 10 standards to which physicians must conform when carrying out experiments on human subjects

“The voluntary consent of the human subject is absolutely essential. This means that the person involved should have legal capacity to give consent; should be so situated as to be able to exercise free power of choice, without the intervention of any element of force, fraud, deceit, duress, overreaching, or other ulterior form of constraint or coercion; and should have sufficient
knowledge and comprehension of the elements of the subject matter involved as to enable him to make an understanding and enlightened decision.

This latter element requires that before the acceptance of an affirmative decision by the experimental subject there should be made known to him the nature, duration, and purpose of the experiment; the method and means by which it is to be conducted; all inconveniences and hazards reasonably to be expected; and the effects upon his health or person which may possibly come from his participation in the experiment.

But in today’s neo-corporate, totalitarian America, FDA approval would eliminate the argument that experimental vaccines can’t be mandated – even if the studies wouldn’t pass in an elementary school science fair.

One thing is clear: The U.S. government – and their puppet masters in Big Pharma – will do ANYTHING and EVERYTHING to make sure that every single person in the nation is vaccinated.

Whether through bribes or threats, there seems to be no limit to the corrupt and coercive commission to force these jabs. This latest move to fast track a study that’s a year and a half shy of its completion date is just the latest move towards that agenda.

And believe me when we say that it won’t be easy. We may lose our jobs. Our children may be excluded from school. If CNN’s Don Lemon has his way, you may not even be allowed to buy groceries.

But great achievement is born of great sacrifice, and freedom is never free.

We are on the threshold of total oppression.

Remember, there is nothing that madmen and megalomaniacs, dictators and despots won’t exploit to enslave humanity and increase their own power and control.

Will you go quietly into the dark?

Or will you stand and fight for liberty as our fathers have before us?

The choice is yours.

←
Previous
Justice Department OKs Vaccine Mandates – Even Under Emergency Use Authorization
→
Next
URGENT – Vital Info RE: COVID-19 Jab Disclosure Forms and Opting Out