You are here: Home / Medical Tyranny / Justice Department OKs Vaccine Mandates – Even Under Emergency Use Authorization 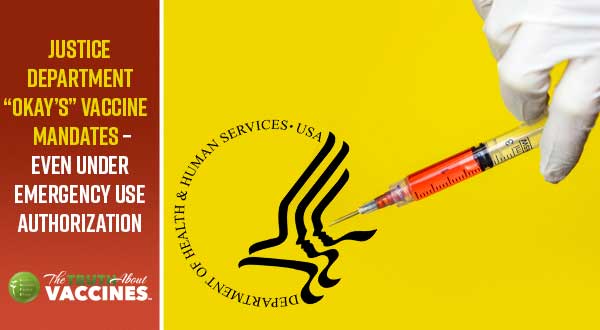 Shortly after the Department of Veteran Affairs announced that COVID-19 shots would be mandatory for all employees, the Department of Justice released an opinion that federal law doesn’t prohibit public agencies and private businesses from requiring Covid-19 vaccines — even if the vaccines have only emergency use authorization.

Privacy and autonomy have long been pillars of patient trust. Your medical conditions and treatments are private, and your decisions are your own. But that privacy and autonomy were dealt a severe blow this month after Justice Department lawyers have determined that federal law doesn’t prohibit public agencies and private businesses from requiring Covid-19 vaccines — even if the vaccines have only emergency use authorization.

First, health care professionals administering the product must be informed:

Second, individuals to whom the product is administered must be informed:

Until recently, the assumption was that conditions regarding informed consent prohibited public or private entities from requiring the administration of any product under an EUA. But that has all changed.

In its vaccine mandate opinion, which was dated July 26, the department’s Office of Legal Counsel said that the law around so-called emergency use authorizations addresses the obligation that certain information be passed on to potential vaccine recipients. The law “does not prohibit public or private entities from imposing vaccination requirements for vaccines that are subject to EUAs,” the opinion said.

“In light of these developments, you have asked whether the ‘option to accept or refuse’ condition in section 564 prohibits entities from imposing such vaccination requirements while the only available vaccines for COVID-19 remain subject to EUAs,” said the memorandum opinion, which was issued for the deputy counsel to the president. “We conclude, consistent with FDA’s interpretation, that it does not. This language in section 564 specifies only that certain information be provided to potential vaccine recipients and does not prohibit entities from imposing vaccination requirements.”

In its vaccine mandate opinion, which was dated July 6, the department’s Office of Legal Counsel said that the law around so-called emergency use authorizations addresses the obligation that certain information be passed on to potential vaccine recipients. The law “does not prohibit public or private entities from imposing vaccination requirements for vaccines that are subject to EUAs,” the opinion said.

The Justice Department’s opinion comes as messaging from mainstream media outlets, some government officials, and world leaders around vaccines has become increasingly forceful in recent days. Amid reports of an increase in “Delta” variant cases, authorities in France and Italy have recently introduced vaccine passport-type systems for entering private businesses, including restaurants, gyms, theaters, and more, a move that triggered widespread demonstrations across Europe over the weekend.

Responding to the vaccine opinion, New York Mayor Bill de Blasio told MSNBC: “Public sector entities need to move as quickly as possible. This DOJ decision is important. I think that will be helpful. We have got to put pressure on this situation.”

In recent weeks, private businesses are shifting their opinions based on fear of the new Delta variant of the virus.

The Department of Veterans Affairs announced on Monday that it will require many of its front-line health care workers to be vaccinated against COVID-19. The VA is the first in the federal government to require shots among its workers.

Some colleges, both public and private, are requiring their students to get vaccinated before returning this fall. Governments — particularly the state of California and New York City — are also previewing plans to require vaccines for certain public workers.

Companies that recently said they will require workers to show proof of vaccination upon returning to the office include Facebook, Google, Adobe, MGM Resorts in Las Vegas, and the Washington Post.

Las Vegas employees of MGM Resorts who refuse to show proof of vaccination will be required to take periodic COVID-19 tests.

Goldman Sachs and Wells Fargo are asking employees to report their vaccination status, while Morgan Stanley is requiring employees who want to return to work in its New York offices to get vaccinated.

The NFL requires players to disclose their vaccination status and requires more frequent testing and imposed heavy restrictions on activities. In an especially bizarre twist, the league recently announced that teams facing COVID-19 outbreaks may be forced to forfeit, but ONLY if the outbreak began with an unvaccinated player.

This new determination means that government and private entities can now require vaccination for employment, participation in events and programs, and a host of other activities. And while many entities aren’t technically forcing the jab, most are requiring a breach of your medical privacy and severe restrictions for those who opt out.

President Joe Biden on Thursday announced sweeping new pandemic requirements aimed at boosting vaccination rates for millions of federal workers and contractors as he lamented the “American tragedy” of “rising-yet-preventable” deaths among the unvaccinated.

Federal workers will be required to sign forms attesting they’ve been vaccinated against the coronavirus or else comply with new rules on mandatory masking, weekly testing, distancing, and more. The strict new guidelines are aimed at increasing sluggish vaccination rates among the huge number of Americans who draw federal paychecks — and to set an example for private employers around the country.

This is a blatant violation of patient confidentiality and the fundamental human right to privacy. Under no other circumstances could an employer require medical documents or impose different requirements based on medication history.

This is another power grab by the government and their puppet masters in tech and pharmaceuticals. It’s a breach of the contract between government and citizens. It’s a violation of our constitutional rights and a perversion of the law.

I have no doubt that this decision will be challenged in court and I pray that the sliver of integrity left in our judicial branch prevails. But for now, this is war. It is a direct assault on our freedom and autonomy.

We must resist it.

Now is the time for defiance.