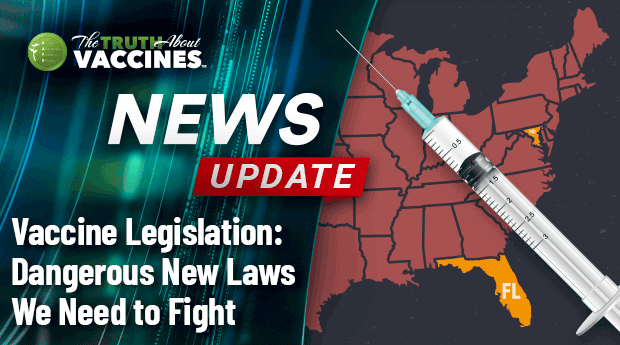 The War on Freedom is escalating at a rapid pace. In addition to censorship online, new legislation is being introduced in states across the nation that would strip parents of their rights and force tens of thousands to be injected with potentially lethal vaccines against their will.

This was once a fringe movement, with only a few states daring to cross the sacred lines of religious and medical freedom. But more and more corrupt governments are trying to introduce bills that would strip you of your God-given and constitutional freedoms.

The Rise of Lawless Vaccine Legislation

Unfortunately, many state and local governments are trying to pass these bills quickly and quietly – before anyone can protest. We saw this recently in New Jersey, where a committee substituted members for a vote in order to pass their dangerous new bill. Fortunately, protestors swarmed the state house and forced a postponement. Once lawmakers heard the cries of their constituents, they were hesitant to vote yes.

We want to give you the knowledge you need to make the best decisions for your families. But we also want you to become active in the fight against this tyranny. We NEED you to become warriors and protestors and advocates. Because the fight is at our front door, and the enemy is only getting stronger.

I’m going to cover a few pieces of legislation that are looming so that you can share the information and reach out to your representatives. What I want you to remember while you’re reading is that this issue transcends party lines. It even transcends your personally decisions regarding vaccines. The truth is that these vaccines are not 100% effective and that they do come with a risk of injury or death.

The U.S. government has paid billions to families who suffered injury or death. The manufacturers themselves include death as a potential side effect of their product – right on the package insert. But you won’t see that because the doctor conveniently discards it before administering your shots.

The vaccine protocol has increased year after year for our children, while infant mortality has increased in our country. Vaccination legislation – and the propaganda efforts behind them – are about two things: money and power.

We’ve talked about the money issues before. Mandatory vaccines would mean a guaranteed customer base of over 4 million babies each year – just in the U.S. Currently, there are about 100,000 American children under age 2 who are not vaccinated, a trend which is going up thanks to groups advocating for vaccine safety and accountability. This represents billions of dollars in lost revenue across the vaccine industry every year.

But it’s also about power. Our government has been slowly expanding its power, and there are those who would like to strip us of our independence and rule as some kind of twisted oligarchy. We’ve seen government leaders use fear to enact illegal and tyrannical new laws.

Officials have gone door to door in major U.S. cities to compel families to receive vaccinations. Hospitals have kidnapped children and imprisoned their parents on the grounds of “medical necessity.” And an increasing number of states are trying to slowly erode our rights as parents, as Americans, and as human beings created by God.

Here’s the latest tyranny to look out for…

This Summer, the Florida senate introduced SB 64. This bill would eliminate all religious exemptions for vaccines required for public and private schools. The bill also wants to create a review board that would have final say over any medical exemptions, stripping doctors of their authority and exposing many children to potential privacy breaches.

We saw this in the case of Dr. Kenneth Stoller, who has been viciously persecuted for supporting freedom. Many of these new bills recommend following CDC standards for vaccine exemption, which is already too limiting. But even the CDC recommends that you not give vaccines to any child who is allergic to the vaccine or any of its ingredients.

But given that children are now required to receive upwards of 25 doses of over 20 different vaccines in their first year alone, how can we possibly know if they will have an allergic reaction? And what about the risks? The products insert for one common combo vaccination lists death as a possible reaction. Are we to play Russian roulette with the lives of our children?

You can use this awesome tool provided by the National Vaccine Information Center to find contact information for your representatives. We encourage Florida residents to schedule meetings or organize protests to fight this bill before it goes to a vote.

In March, the District of Columbia introduced legislation that would strip parents of their rights. B23-0171 has been under deliberation for some time, with a public hearing occurring this summer. As of now, it is still under review, which means it has not been withdrawn and could still go into effect.

In essence, the new law would allow children to give informed consent to be vaccinated. This would happen against the will and without the knowledge of parents. There is already a massive propaganda effort that’s attempting to sway public opinion against those who question the safety of vaccines, no matter the reason.

This bill would allow children to be isolated from their parents and receive a lecture about why vaccines are essential. This would likely come from a doctor, teacher, or other trusted authority figure. It’s the very definition of manipulation and precisely the reason that children are not allowed to make important decisions for themselves.

A statement submitted by the NVIC explained it this way:

B23-0171 blatantly ignores the existing intent of other laws and regulations putting parents in charge of vaccination decisions including section 5300.11 providing the legal right of the parent to claim a medical or religious exemption to vaccination.

B23-0171 places vaccines in a special category to allow legally unaccountable individuals to persuade a minor child to get vaccinated without the knowledge or consent of the parent. Medical practitioners, schools, and others should never be permitted to coerce impressionable minor children into a medical procedure that is capable of causing injury or death behind their parents’ backs. Unlike medical, school or other personnel administering vaccines, parents are legally accountable and financially responsible for the health care and education of a minor child when that child experiences a vaccine reaction and becomes chronically ill or disabled.”

Feel free to use some of this information when voicing your concerns. Again, you can use this tool to find local D.C. council members. Please flood them with calls, letters, and emails imploring them to strike this unconstitutional bill!

Earlier this month, a bill was pre-filed in Arizona for the 2020 legislative session. SB 1028 would expand the powers of the Governor to declare a public health emergency as well as the extent of his power under that order.

The Governor would be able to issue orders mandating vaccinations. Anyone who doesn’t comply could be isolated or quarantined by the state until they comply, or the state of emergency is lifted. Although this bill is in its formative stages, it is essential that we act NOW.

Remember when New York City Mayor Bill DeBlasio declared a state of emergency? He ordered a primarily Jewish community – many of whom refused vaccinations on religious grounds – to receive vaccinations or be fined. The government used medical records to try to identify families who hadn’t complied.

Fortunately, courts overturned this abuse of power before any families had their doors kicked in.

This new quarantine could essentially devolve into a legalized form of imprisonment for anyone who refuses to receive vaccines. The state of emergency criteria would be loosened and the government could violate a whole slew of constitutional and human rights in the wake of this bill.

Again, please use this tool to find members of Arizona’s congress. We need to overwhelm them now – BEFORE the session begins – to let them know that this is a massive breach of our civil liberties and will not be tolerated by free Americans.

Get our FREE template that you can use when sending letters and emails to these representatives! >> Click here to download.