You are here: Home / Medical Tyranny / NYC Mayor Forces Citizens to Get Vaccinated… or Pay the Price! 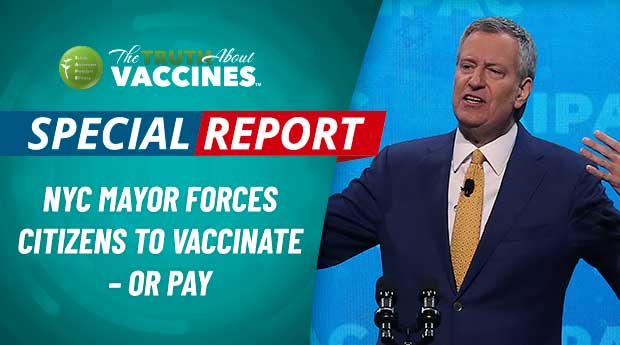 Driven from every other corner of the earth, freedom of thought and the right of private judgment in matters of conscience direct their course to this happy country as their last asylum.” —Samuel Adams

For years, we’ve been warning that the government is headed towards forced vaccinations. Not just restrictions for public school admission or specific healthcare jobs, but unrelenting, mandatory vaccinations with retribution for non-compliance.

That day is here.

This morning, New York City Mayor Bill de Blasio declared a public health emergency due to the increased incidence of measles in Brooklyn. At 10:30 this morning, Mayor de Blasio tweeted the following:

Unvaccinated children in the zip codes of 11205, 11206, 11221 and 11249 may not return to school or daycare for the duration of this outbreak. If you choose to not vaccinate, you will be fined. We have to protect our kids and our families.”

The reported cases of measles have been primarily limited to the Orthodox Jewish community in Williamsburg, a neighborhood in Brooklyn. According to Reuters, anyone who has not received the measles-mumps-rubella (MMR) vaccine will face a fine up to $1,000.

The NYC Department of Health will be using electronic health records to locate unvaccinated citizens of all ages and compel them to receive the vaccination – or pay the price.

“It was time to take a more muscular approach. The faster everyone heeds the order, the faster we can lift it,” said de Blasio. But lifting a mandate only once everyone has complied hardly equates to freedom.

Thomas Jefferson said that “The constitutional freedom of religion is the most inalienable and sacred of all human rights.” He also stated that he “Consider[s] the government of the U.S. as interdicted by the Constitution from intermeddling with religious institutions, their doctrines, discipline, or exercises.”

You see, the measles infection was traced back to an unvaccinated child who contracted measles while visiting Israel, and has spread almost exclusively among orthodox Jews, many of whom have a religious objection to receiving vaccines. It is a tragic day when Americans are no longer allowed to make decisions for their health and the health of their families.

In an article titled “What the world’s religions teach, applied to vaccines and immune globulins,” which was published in the journal Vaccine, the author sought to review the religious basis for vaccine abstinence. He determined that most religious reasons for declining vaccines were not actually based in scripture, and that people of all religions should receive vaccines.

The author’s name was John Grabenstein, a researcher for the major vaccine manufacturing company Merck. Grabenstein is currently the Executive Director of Global Health & Medical Affairs for Merck’s vaccine division.

It is no coincidence that Anita Kawatra, the former Director of Corporate Communications and Public Affairs for Merck, now sits on the NYC Health and Hospitals Board of Directors. Kawatra’s resume includes over 20 years of work in the pharmaceutical industry, including the creation of the International AIDS Vaccine Initiative. She also served in the administrations of New York City Mayor David Dinkins and New York Governor Mario Cuomo.

The Influence & Incentive of Big Pharma

I mention these connections to Merck because Merck manufactures and owns the patents to MMR vaccines, including MMRII and Proquad, an MMR/Varicella combo vaccine. These vaccines are both purchased under contract by the CDC, in addition to the private sector. And Merck can’t be happy about a drop in vaccinations.

In 2018, Merck generated $1.8 BILLION in revenue from the MMR vaccine alone.

Mandatory vaccines would mean a guaranteed customer base of over 4 million babies each year just in the U.S. Currently, there are about 100,000 children under age 2 who are not vaccinated in the U.S, a trend which is going up thanks to groups advocating for vaccine safety and accountability. This represents tens of millions in lost revenue for Merck, and billions across the vaccine industry every year. Walgreens sells the MMR vaccine at $99.99 a pop.

Here are just a few of the vaccines the CDC is contracted to purchase from Merck for children under 2 years old:

As vaccine exemptions and abstentions increase, the industry continues to lose revenue. This expands to insurance providers, pharmacies, and a host of industries associated with vaccine manufacturing and sales. This is why we’re seeing a frantic effort by the media, government, and medical industry to denounce safety advocates, exaggerate disease risks, and introduce an age of mandatory vaccination.

In fact, both Mayor de Blasio and city health officials were practically shrieking this morning about “misinformation” and how the MMR vaccine is “safe and effective.”

“I understand that parents may be afraid of getting their children vaccinated,” New York City Health Commissioner Oxiris Barbot said in a news conference. “I know that getting vaccinated is far safer than getting measles.”

Let’s take a look at that statement.

The Truth About Measles

From 1959-1962 – just before the vaccine was introduced – measles was fatal in only 0.01% of cases. And while the number of unvaccinated children has quadrupled since 2001, from 2000-2016 measles deaths decreased by 84%. But there are other factors at play when it comes to the dangers of measles.

Malnutrition, especially vitamin A deficiency, is a primary cause of about 90,000 measles deaths annually in underdeveloped nations. In the U.S. and other developed countries, up to 92% of hospitalized measles patients are low in vitamin A. Better nutrition and hygiene may explain the decline in measles mortality even before the vaccine existed.

Mayor de Blasio, Merck, and the CDC would have you believe that we are in the midst of an epidemic crisis. After all, there have been over 450 confirmed cases of measles in the U.S. this year alone. They’d have you believe that your freedom to choose what goes into your body – and even your constitutional right to religious freedom – must be forfeited in order to save the children. How many must die?

Since the turn of the millennium, there have been 11 deaths from measles in the U.S.

You are 1,038.6 times more likely to die falling out of bed than from measles.

In 2017 alone, 16 Americans died from lightning strikes – more than those who have died from measles in the last 20 years. In fact, according to the Vaccine Adverse Event Reporting System (VAERS), you’re more likely to die from the MMR vaccine than you are from measles.

While the mortality from measles in the U.S. remains virtually non-existent, the risks of receiving untested vaccines for which the manufacturers are not liable are robust. Serious complications reported by Merck in the ProQuad product insert include:

We wrote just a few weeks ago about all the signs pointing to mandated vaccines. We even specifically pointed out the objective outlined in the National Adult Immunization Program to increase the use of electronic health records and immunization information systems to collect and track adult immunization data.

Within 48 hours of this new mandate, a community that has been targeted for their religious and personal beliefs will be forced to vaccinate themselves and their children. The health department has said it will use vaccination records to hunt them down. Dr. Oxiris Barbot, the city’s health commissioner, has said that anyone who is fined and still refuses to comply will be handled on a case-by-case basis and they’ll “have to confer with our legal counsel.”

Famed author Albert Camus once said: “The only way to deal with an unfree world is to become so absolutely free that your very existence is an act of rebellion.”

It’s time to rebel. Today, it’s the Jewish community in Brooklyn. Tomorrow, it could be you.