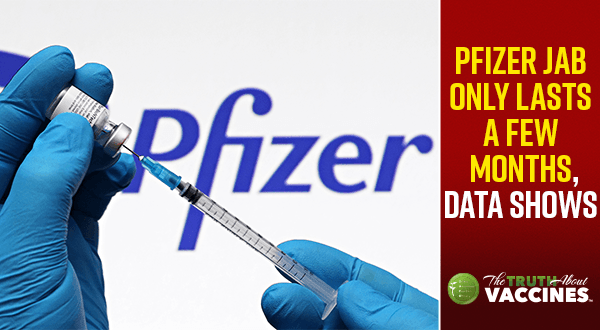 This week, the CDC declared that COVID shots provide more immunity than natural exposure to the virus. But new data out of Israel paints a different picture. In fact, researchers found that immunity against the Delta variant from Pfizer’s COVID-19 “vaccine” waned after a few months across all age groups.

Rates of infection in July were higher among adults ages 60 and up who had received their second jab in January compared with those who finished the 2-dose shot in March, reported Yair Goldberg, PhD, of the Technion-Israel Institute of Technology in Haifa and lead author of the study.

Researchers found that antibody levels among 4,800 health care workers fell rapidly within months after two doses of the Pfizer vaccine, “especially among men, among persons 65 years of age or older, and among persons with immunosuppression.“

Similar rates of infection were seen among adults ages 40 to 59 who received the jab in February versus those who were stuck in April, and among individuals ages 16 to 39 who got the shot in March compared with those who got it in May, the authors reported in the New England Journal of Medicine.

But the Israeli research is not an anomaly.

Research conducted in Southern California has confirmed the dramatic erosion of the Pfizer-BioNTech concoction’s protection against “breakthrough” coronavirus infections.

The new study, one of the largest and longest to track the effectiveness of a “vaccine” in Americans, found that its ability to protect against infection stood at 88% in its first month, then fell to 47% after just five months.

The study, funded by Pfizer and published Monday in the journal Lancet, also provides strong new evidence that the waning immunity against infection probably would have been seen with or without the arrival of the Delta variant.

In another study of Pfizer’s MrNA cocktail, researchers in Qatar found that “protection against infection builds rapidly after the first dose, peaks in the first month after the second dose, and then gradually wanes in subsequent months,” Laith Abu-Raddad, of Weill Cornell Medicine-Qatar, and colleagues wrote.

“The waning appears to accelerate after the fourth month, to reach a low level of approximately 20% in subsequent months,” they added.

Pfizer has been saying that immunity from the first two doses of the jab begins to wear off after a few months. In September, the U.S. Food and Drug Administration (FDA) approved emergency use of booster doses of Pfizer’s shot six months after high-risk people finish their first two doses.

The available science continues to confirm that natural immunity from exposure to the virus is far superior to artificial immune response.

Meanwhile, the U.S. Centers for Disease Control and Prevention (CDC) has recommended booster shots for people over 65, people with medical conditions that raise their risk of severe COVID-19, and people at high risk of coronavirus infection because of their jobs.

In the United States, more than 6 million people have already received a third shot. On average, the CDC says, the pace of booster shots is now higher than the rate of people getting jabbed for the first time.

Which has worked out well for Pfizer.

Earlier this week, Pfizer reported that earnings and sales more than doubled in the past quarter, and it raised its outlook for results the full year, thanks greatly to its Covid-19 “vaccine.”

Add in the FDA’s inexplicable decision to approve the shot for children and Joe Biden’s push for unlawful mandates, and it’s no wonder the COVID shot is the best-selling product in Pfizer’s 170-year history.

It’s probably also just a coincidence that Pfizer is the 6th most popular stock owned by members of congress. Remember, these mandates and reckless approvals are definitely for the greater good. No way this has anything to do with expanding government powers or generating unprecedented wealth for the elite.