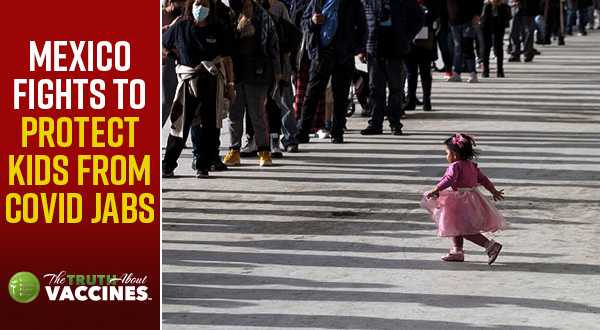 As the United States launches COVID shots for children as young as 5, there are still some world leaders fighting to protect our kids. The FDA and CDC have begun their aggressive push to inject our kids with the latest profit-generator, but in Mexico, government leaders have resisted calls to vaccinate the young.

“Children have a wonderful immune system compared to the later phases … of their life,” he said during an appearance in the lower house of Congress.

In that context, “hindering” the “learning” of a child’s immune system – the “cells that defend us our whole lives” – with a “completely inorganic structure” such as the COVID jab is not the right thing to do, the health minister said.

The fight over COVID shots for children has escalated over the last several months, with President Andrés Manuel López Obrador battling Mexican courts. Government health officials have said that those under 18 are unlikely to become seriously ill from the virus.

President Andrés Manuel López Obrador has said that pharmaceutical companies want to scare countries into buying more vaccines, either for children or for a third dose, topics he said required more scientific study.

“They could scare us by saying ‘I can’t believe you aren’t vaccinating children,’” he said. “But we’re not going to be hostage to that.”

A Mexico state-based federal judge last week ordered health authorities to modify the national vaccination policy to include all minors between ages 12-17. The ruling came after dozens of lawsuits by parents who wanted to inject their children with the COVID shot.

President López Obrador dismissed the ruling as “not definitive” and hinted at challenging the decision, saying during a news conference that “legally this is going to be respected, but at the same time, we are going to go to the relevant authority to clarify” the court’s decision.

Health authorities have so far only inoculated minors who obtained injunctions ordering their vaccination, although the government announced last month that it would offer vaccines to more than 1 million children with serious health conditions that make them more vulnerable to serious illness.

Mexico stands alone among industrialized nations and fellow Latin American countries in its efforts to protect children. Brazil, Argentina, Colombia, Peru, Uruguay, and Chile are now vaccinating minors. The U.S. plans to start injecting kindergartners as soon as next week.

The judge, whose blanket ruling came in response to an injunction request filed by the family of a 15-year-old girl seeking her vaccination, gave the government an early October deadline to comply with her order. But the government’s consideration of it was reportedly hindered by the closure of offices within the Health Ministry due to a coronavirus outbreak.

The ministry instructed its offices to ‘abstain from receiving complaints, injunctions, summons … and any other notification from jurisdictional authorities.’ This measure has left the order issued in México state in an impasse because health authorities haven’t been notified.

Andreu Comas, a virologist and researcher at the Autonomous University of San Luis Potosí, told Mexican newspaper El País there is no evidence that COVID-19 vaccines can damage minors’ immune systems.

“There is not a single piece of scientific evidence saying that the COVID vaccine, or any other vaccine, will weaken the immune system,” he said.

That could be because the safety of the Pfizer shot in young children was com[pared to the safety studies used initially by the FDA, which were a scientific disgrace. It also ignores the overwhelming evidence that the Pfizer jab is more likely to hospitalize children with heart complications than it is to protect them from life-threatening complications from the virus.

“Only by immunizing children will we be able to reach true herd immunity that will allow us to stop using face masks,” Comas said.

And there it is.

This entire saga has been about money and control. Our basic freedoms are being held hostage until we comply. Whether with carrot or stick, the pharmaceutical industry (and their lackeys in government) are doing everything they can to force these shots down our proverbial throats.

“Just get the shot and we can go back to normal.” “You need to be vaccinated if you want to keep your job.”

Now, they’re coming for our kids. It’ll start with incentives and “privileges” like freedom from mask mandates, and will escalate quickly to mandates for schools, daycare centers, and parks. Is it so crazy to think that parents who refuse to have their children injected could be deemed unfit by Child Protective Services?

In Mexico, the government is still fighting to protect the most vulnerable among us. We need more men and women like that to stand up.