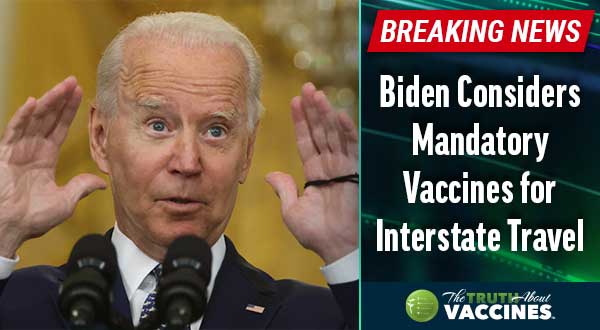 The Associated Press reported today that the Biden Administration is considering “tougher rules” surrounding the experimental COVID-19 shots. Among these potential changes are a vaccine mandate for interstate travel and reduced healthcare coverage for the unvaccinated.

Here’s what you need to know.

The effort to administer the COVID-19 shots to as many Americans as possible has increased drastically over the past few weeks. The federal government has made the transition from carrot to stick, replacing lottery tickets, donuts, and other incentives with harsh new requirements and penalties for refusing the jab.

In just the past few weeks, millions of federal and private sector workers have been forced to get the jab or face onerous restrictions and penalties. In some cases, workers must choose between vaccination and termination. Both the Department of Veterans Affairs and the Department of Health and Human Services have announced that they will require their workers to be vaccinated, while the Pentagon announced plans for a vaccine mandate for all military personnel by next month.

But this joint effort by the federal government and the private sector is no coincidence. AP reports that Biden has been meeting with business leaders at the White House to pressure them to follow the federal government’s example by forcing the shots for their own employees and customers.

White House officials say Biden wanted to initially operate with restraint to ensure that Americans were ready for the strong-arming from the federal government. These moves have been carefully orchestrated to encourage a wave of businesses and governments to follow suit.

Biden administration officials briefed prominent Washington trade groups, including the Chamber of Commerce and the Business Roundtable, ahead of the federal announcement in hopes their members would follow suit. White House officials have fielded dozens of calls from business executives in recent weeks about how to implement their own vaccination mandates

Thanks to the FDA’s expedited approval for the Pfizer/BioNTech shot, restrictive new rules for the unvaccinated, and a relentless propaganda campaign, the number of Americans willing to accept the jab is increasing. For the Biden administration, that shift in public opinion signals the start of much more aggressive measures.

Vaccine mandates are “the right lever at the right time,” said Ben Wakana, the deputy director of strategic communications and engagement for the White House COVID-19 response. The approach to vaccination has been deliberately calibrated to avoid too much backlash from American citizens.

Currently, the federal government is poised to take assertive action on the state and local level.

But Biden’s enthusiasm for expansive government control is subjective. In states like Florida and Texas, republican governors have issued executive orders to protect personal freedom of choice by outlawing mask mandates by schools or state health officials.

But many school systems and local governments have openly defied the order, requiring masks and even vaccination in some counties. Biden was a loud supporter of executive orders when they were used to enforce masking and other restrictions, but has praised those who violate orders preventing the restrictions.

“To the mayors, school superintendents, educators, local leaders, who are standing up to the governors politicizing mask protection for our kids: thank you,” Biden said Thursday.

More severe interference by the government — such as mandating vaccines for interstate travel or changing how the federal government reimburses treatment for those who are unvaccinated and become ill with COVID-19 — have been discussed, but the administration worries that they would be too polarizing… for now.

An administration official has said that there are no plans to implement a vaccine mandate for interstate travel “at the moment,” but legislation has already been submitted that would inhibit the ability of Americans to travel freely within their own country.

Last week, New York representative Ritchie Torres introduced H.R.4980 to the House Committee on Homeland Security. Although the full text of the legislation has not yet been made available, it’s title is more than concerning:

“To direct the Secretary of Homeland Security to ensure that any individual traveling on a flight that departs from or arrives to an airport inside the United States or a territory of the United States is fully vaccinated against COVID-19, and for other purposes.”

Currently, the majority of committee members have seemed to support government mandates regarding COVID-19. And with a majority in the House of Representatives and the tie-breaking vote in the Senate, you can expect Democrats to fast-track this bill before the midterm elections next year. (Early poll data suggests that Republicans are likely to regain control of the House in 2022.)

Remember: Many states prohibited their residents from leaving the state (or restricted travel to and from specific states) just a year ago. The idea of a federal mandate requiring vaccination to travel isn’t much of a stretch – especially considering the concerning trend of federal involvement in state and local affairs.

Fortunately, there are some groups already fighting back. In addition to the governors who have banned forced masking of vaccination, a group of nurses in VA have made it clear that they will not be bullied into accepting an experimental injection.

On Wednesday, the nurses (who work for Valley Health) gathered along the interstate outside the Valley Health Urgent Care center to protest a new policy requiring vaccination for all employees, contractors, and physicians.

Each nurse at the gathering said they knew the risk and likely would lose their jobs by refusing to receive the vaccine. One man participated on behalf of his wife who feared attending the event. Nurses at the picket site said they were willing to continue wearing masks and following safety protocols rather than take the vaccine.

Each of the nurses also said they’ve contracted and recovered from COVID-19 though none needed hospitalization. The nurses agreed that Valley Health should take into consideration the fact that, as a result of contracting the virus, they have the antibodies to fight the disease and do not need the vaccine.

Right now, the Biden administration is scared. They’re scared that if they push their oppressive and unconstitutional agenda too quickly, they’ll have a revolt on their hands. They want to roll out these changes slowly and smoothly to minimize and pushback.

In fact, the Department of Homeland Security has even issued a new terrorism warning, citing new pandemic restrictions as a catalyst for “anti-government/anti-authority violent extremists” to “exploit the emergence of COVID-19 variants.”

Since when did questioning the government become un-American? Since when did the people of this great nation become so willing to surrender their God-given autonomy to the will of a few bureaucrats?

When will America WAKE UP and FIGHT BACK?

←
Previous
Physician Speaks Out Against ‘Vaccine Mandates for All’ — Especially Children and Those With Natural Immunity
→
Next
Massive fraud in reporting vaccine injuries; withheld data, pretense of “safe and effective”