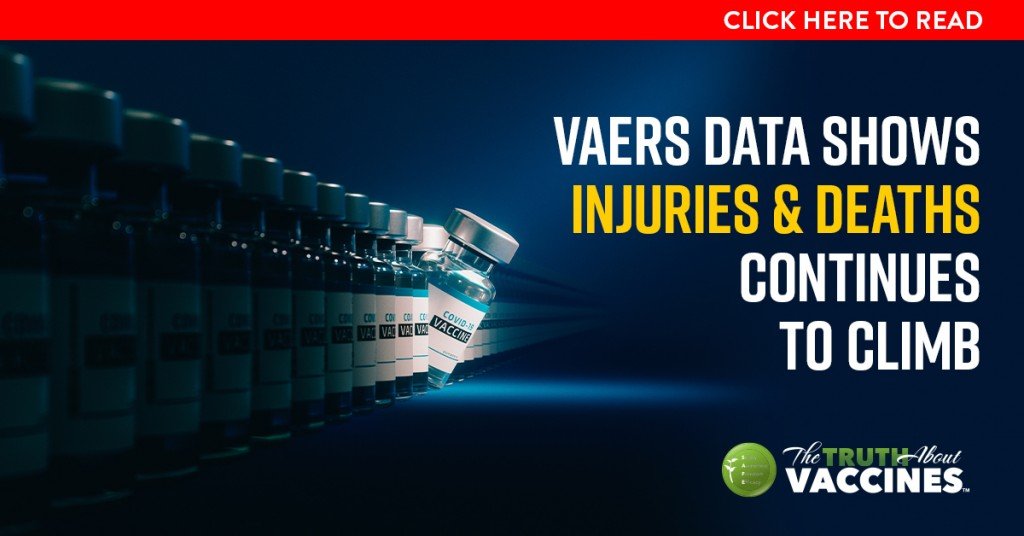 This week’s number of reported adverse events among all age groups following COVID vaccines surpassed 329,000, according to data released today by the Centers for Disease Control and Prevention (CDC). The data comes directly from reports submitted to the Vaccine Adverse Event Reporting System (VAERS).

VAERS is the primary government-funded system for reporting adverse vaccine reactions in the U.S. Reports submitted to VAERS require further investigation before a causal relationship can be confirmed.

Every Friday, VAERS makes public all vaccine injury reports received as of a specified date, usually about a week prior to the release date. Today’s data show that between Dec. 14, 2020 and June 4, a total of 329,021 total adverse events were reported to VAERS, including 5,888 deaths — an increase of 723 deaths over the previous week. There were 28,441 serious injury reports, up 3,082 compared with last week.

Among 12- to 17-year-olds, there were 59 reports of heart inflammation and 19 cases of blood clotting disorders. 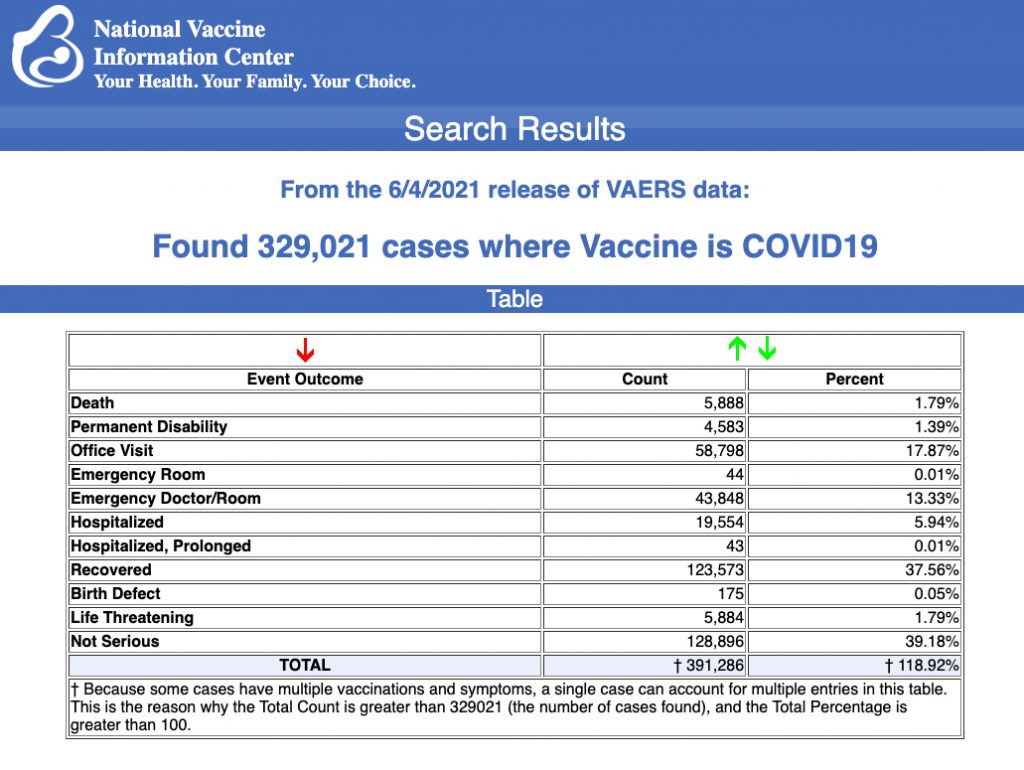 As The Defender reported today, the CDC on Thursday announced plans to convene an emergency meeting of its advisers on June 18 to discuss higher-than-expected reports of heart inflammation following doses of Pfizer and Moderna COVID vaccines.

As The Defender reported Thursday, before the announcement, the CDC on June 1 had quietly updated its website to acknowledge a higher-than-expected number of cases of myocarditis among young teens after the second dose of an mRNA COVID vaccine.

Based on a May 24 report from the CDC’s Advisory Committee on Immunization Practices COVID-19 Vaccine Safety Technical Work Group, the CDC on June 1 added new language to its guidance:

“Data from VAERS [Vaccine Adverse Events Reporting System] show that in the 30-day window following dose 2 mRNA COVID-19 vaccination, there was a higher number of observed than expected myocarditis/pericarditis cases in 16–24-year-olds.”

The updated language differed significantly from the CDC’s statement two weeks earlier, which said rates of myocarditis were not higher among vaccinated people.

During a Thursday meeting of advisors to the U.S. Food and Drug Administration, CDC officials presented data showing a total of 475 cases of myocarditis or pericarditis were recorded in patients 30 and younger following mRNA vaccines.

The CDC identified 226 reports that might meet the agency’s “working case definition” of myocarditis. The majority of those affected have recovered, but 41 had ongoing symptoms, 15 are still hospitalized and three are in the intensive care unit.

On June 10, The Defender reported the Oregon Health Authority said it was aware of at least 11 cases of myocarditis or pericarditis — inflammation of the sac surrounding the heart — in all age groups following COVID vaccination.One of the cases is a 15-year-old teen in Beaverton, Oregon, who was hospitalized for heart inflammation after receiving his second dose of the Pfizer vaccine.

“The hallmark symptom of myocarditis and pericarditis is chest pain or shortness of breath,” Jonathan Modie, an Oregon Health Authority spokesperson, said in an email. “In rare cases, it can also present in the form of heart palpitations. Anyone suffering from unexplained chest pain should contact a medical provider or seek immediate emergency care.”

A search of the latest available data in VAERS revealed 900 cases of myocarditis and pericarditis, among all age groups reported in the U.S following COVID vaccination between Dec.14, 2020 and June 4, 2021. Of the 900 cases reported, 533 cases were attributed to Pfizer, 331 cases to Moderna and 32 cases to J&J’s COVID vaccine.

As The Defender reported June 11, an FDA advisory committee held a virtual meeting Thursday to discuss what data would be needed to vaccinate children under 12 against COVID under Emergency Use Authorization (EUA) or licensure.

Several experts spoke out against the plan, saying the benefits don’t outweigh the risks for young children. Peter Doshi, Ph,D, associate professor University of Maryland School of Pharmacy and senior editor of The BMJ, said during the open public hearing session, there is no emergency that would warrant using EUA to authorize COVID vaccines for children.

Kim Witczak, an FDA consumer representative, expressed great concerns over the premature approval of COVID vaccines for children. Witczak said data shows children are neither in danger or dangerous and questioned the timing of last Friday’s CDC announcement of the rise in children being hospitalized with COVID.

Dr. Cody Meissner, director of pediatric infectious diseases at Tufts University School of Medicine, said children are at low risk of severe disease from the virus and more study is needed about safety in younger age groups.

Witczak and Doshi were two of 27 researchers and clinicians around the world who launched a citizen’s petition demanding the FDA withhold full approval of COVID vaccines until efficacy and safety measures are met.

The members of the FDA’s Vaccines and Related Biological Products Advisory Committee were not asked to provide specific advice or to vote during the meeting.

Moderna, Pfizer push to vaccinate kids as young as 5 by September

Moderna and Pfizer both this week said they expect to make their vaccines available to children as young as 5 by September.

As The Defender reported this week, Pfizer is advancing late-stage clinical trials of its COVID vaccine, in lower doses, on children ages 5 to 11 years old and expects to apply for approval early this fall. The study will enroll up to 4,500 children at more than 90 clinical sites in the U.S., Finland, Poland and Spain, the company said.

Based on safety, efficacy and tolerability data from the 144 children included in Pfizer’s phase 1 trial, the company will use 10 micrograms of each vaccine dose for kids between the ages of 5 and 11 in phase 2/3 trials, and 3 micrograms of each dose for those 5 and younger.

Moderna said it also expects its COVID vaccine will be available for kids as young as 5 by early fall. CEO Stéphane Bancel said Monday he thinks the data will become available sometime in September.

A new preprint study by the Cleveland Clinic found people previously infected with SARS-CoV-2 were less likely to be reinfected than fully vaccinated individuals who never had the virus — suggesting the vaccine is of no benefit to people who already had COVID.

As The Defender reported, the study, available on medRxiv, provides insight into how the immune system protects the body once a COVID infection is confirmed.

New documents obtained by TrialSite News suggest routine quality testing issues were overlooked in the rush to authorize use of Pfizer’s COVID vaccine, and that U.S. and other governments are conducting a massive vaccination program with an incompletely characterized experimental vaccine.

As The Defender reported June 7, regulatory documents revealed Pfizer didn’t thoroughly examine biodistribution and pharmacokinetics issues relating to its vaccine before submitting the vaccine to the European Medicines Agency (EMA) for review.

Pfizer also did not use the commercial vaccine (BNT162b2) for all of its studies, but instead relied on a “surrogate” mRNA that produced the luciferase protein.

According to TrialSite News, it’s standard practice for the EMA to disclose its assessment of investigational new drug submissions. In the case of Pfizer’s vaccine, the EMA assessment included a summary of the agency’s evaluation of the non-clinical vaccine distribution studies reported to EMA by Pfizer — but the EMA did not disclose the results of Pfizer’s biodistribution studies in its public EMA summary.

On March 8, The Defender contacted the CDC with a written list of questions about reported deaths and injuries related to COVID vaccines. After repeated attempts, by phone and email, to obtain a response to our questions, a health communications specialist from the CDC’s Vaccine Task Force contacted us on March 29 — three weeks after our initial inquiry.

On May 19, a CDC employee said our questions had been reviewed and our inquiry was pending in their system, but would not provide us with a copy of the response. We were told we would be contacted by phone or email with the response.

On June 4, the CDC employee we contacted said nobody had responded to our inquiries. We were advised to submit our questions again, which we have done numerous times.

It has been 95 days since we sent our first email inquiring into VAERS data and reports and we have yet to receive a response.

Children’s Health Defense asks anyone who has experienced an adverse reaction, to any vaccine, to file a report following these three steps.