You are here: Home / Vaccine Safety / CDC to Convene Emergency Meeting on 226 Reports of Heart Inflammation After COVID Vaccine in People Under 30 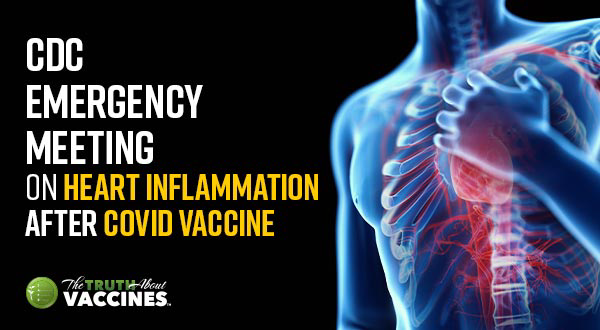 The Centers for Disease Control and Prevention (CDC) announced Thursday it will convene an emergency meeting of its advisers on June 18 to discuss higher-than-expected reports of heart inflammation following doses of Pfizer and Moderna COVID vaccines, CBS News reported.

According to the CDC, a total of 475 cases of myocarditis or pericarditis were recorded in patients 30 and younger. The CDC identified 226 reports that might meet the agency’s “working case definition” of myocarditis and pericarditis following the shots, the agency disclosed Thursday during an FDA hearing.

The majority of those affected have recovered, but 41 had ongoing symptoms, 15 are still hospitalized and three are in the intensive care unit.

Dr. Tom Shimabukuro, deputy director of the CDC’s Immunization Safety Office said during Thursday’s meeting there had been a higher-than-expected number of cases of heart inflammation among young people recently vaccinated with their second doses of mRNA vaccine.

CDC data showed 196 reports of myocarditis and pericarditis among 18- to 24-year-olds through May 31, compared with an expected rate of between eight and 83 cases.

Among 16- to 17-year-olds, 79 cases of myocarditis and pericarditis were reported through May 31. The expected rate among people in this age group is between two and 19 cases, Shimabukuro said during his presentation.

Shimabukuro said the CDC’s findings were “mostly consistent” with reports of rare cases of heart inflammation that had been studied in Israel and reported by the U.S. Department of Defense earlier this year.

Myocarditis is inflammation of the heart muscle that can lead to cardiac arrhythmia and death. According to researchers at the National Organization for Rare Disorders, myocarditis can result from infections, but “more commonly the myocarditis is a result of the body’s immune reaction to the initial heart damage.”

Pericarditis is often used interchangeably with myocarditis and refers to inflammation of the pericardium, the thin sac surrounding the heart.

A search in the CDC’s Vaccine Adverse Events Reporting System (VAERS) revealed 900 cases of pericarditis and myocarditis reported in the U.S., among all age groups, following COVID vaccination, between Dec. 14, 2020 and June 4, 2021.

On May 10, the U.S. Food and Drug Administration (FDA) expanded the EUA for Pfizer’s COVID vaccine to include children aged 12-15 years. On June 10, Moderna asked the FDA to expand emergency use of its COVID vaccine in adolescents ages 12 to 17.

The CDC had previously said it was investigating reports that some teenagers and young adults vaccinated against COVID may have experienced heart problems, according to the agency’s advisory group.

The CDC’s Advisory Committee on Immunization Practices in a statement said reports of myocarditis to date seemed to occur predominantly in adolescents and young adults, more often in males than females, more often following the second dose and typically within four days after vaccination. Most cases appeared to be “mild” and follow-up is ongoing.

The CDC’s Vaccine Safety Technical Work Group originally said its monitoring systems had not found more cases of myocarditis than would be expected in the population, but members of the committee on vaccinations said healthcare providers should be made aware of the reports of the “potential adverse event.”

But as The Defender reported June 10, the CDC subsequently acknowledged — in guidance updated on its website June 1 — a higher-than-expected number of cases of myocarditis among young teens after the second dose of an mRNA COVID vaccine. It wasn’t until Thursday’s FDA meeting that the agency publicly discussed the higher rate and followed up by announcing plans to hold an emergency meeting.

On June 2, Israeli health officials found a “probable” link between Pfizer’s COVID vaccine — which the country has relied on almost exclusively in its vaccination drive — and dozens of cases of heart inflammation in young men following the second dose.

In a statement, Pfizer said there is still no indication the cases are due to its vaccine. Myocarditis is often caused by viral infections, and COVID infections have been reported to cause the condition, the drugmaker said.

Pfizer’s partner, BioNTech, said more than 300 million doses of the COVID vaccine have been administered globally and the “benefit-risk profile” of the vaccine remains positive.

On May 7, EU regulators called on Pfizer and Moderna to provide additional data related to the companies’ COVID vaccines and a potential link to heart inflammation, after the agency completed a safety review of all four COVID vaccines authorized for emergency use in the EU.

A report issued by European Medicines Agency’s Pharmacovigilance Risk Assessment Committee (PRAC) disclosed its members were aware of cases of myocarditis and pericarditis following Pfizer vaccination. Regulators said they didn’t see an indication the vaccine caused these cases, but as a prevention, PRAC requested Pfizer provide further data, including an analysis of events according to age and gender in its next pandemic summary safety report and will consider if any other regulatory action is needed.