You are here: Home / Vaccine Safety / Vaccines: Who is Responsible for Their Safety? (Part 2)

Video Transcript: Vaccines: Who is Responsible for Their Safety?

Charlene Bollinger: Currently, the pharmaceutical industry doesn’t take any of the blame for vaccine-caused damages because the government has helped them become immune to it. This means that we live in a system that lacks the proper checks and balances.

Ty Bollinger: That’s right. The wrong people are checking on the safety and efficacy of vaccines for our children. What do we do when accountability is thrown out the window? Join Del Bigtree as he shares more about who is truly responsible for vaccine safety.

Del Bigtree: So, what I want to talk about is who is responsible for vaccine safety? Now if Toyota’s airbags fail, or Graco’s car seat doesn’t work, or we find out that Merck’s Vioxx—they lied about it and killed tens of thousands of people, arguably, maybe as much as hundreds of thousands of people—who is responsible? The industry. The manufacturer that makes these products.

Toyota has to recall that car. It’s going to cost them millions and millions of dollars because that air bag failed. Graco the same thing. Every car seat has to come back. And Vioxx? That story is unbelievable.

Merck, that makes Vioxx, who actually makes most of your childhood vaccines, was busted in court and had to pay out over three billion dollars in damages for having murdered over fifty thousand American citizens.

And what did we discover in that court case? That they knew that their drug caused heart attacks. And when we looked at the emails that were being transferred between the people working at Merck, we found that they had a memo that said that “Any doctor that questions the safety of Vioxx, we will hunt them down and destroy them where they live.” That’s how we found out about what Merck thinks of us as customers.

What is the case when we think about vaccines? Pfizer, Merck, Sanofi—what is their responsibility if a vaccine hurts somebody? Zero. Zero, because in 1986, the pharmaceutical industry essentially blackmailed Ronald Reagan and said,

Now, Ronald Reagan was reticent to sign something like that. He saw the possible dangers in it, but there were other sides to the story and many groups that wanted to see this happen. So, he signed it. And we suddenly took all liability away from an industry that makes vaccines, that makes a product that is injected into babies and children across America and the world.

What’s the consequence of this? With no incentive to conduct safety studies. In fact, the industry is incentivized to not conduct safety studies because the only part of the 1986 compensation act that allows you to sue them is if they know that a vaccine has an adverse effect or an issue that they failed to report. So, by nature, the industry says, “Let’s not do any studies so we don’t find anything we have to report. If we do no studies, we are free from all liability.”

An incredible set-up. It’s like nothing we have ever seen in this country. What does that create? It creates a liability-free market of 78 million American children and a strong incentive to create more vaccines, which is exactly what this did.

Again, in 1986, here are the 11 vaccines that you had to have to be compliant by the time you were 18. By 2017, it bloated to 53 vaccines. Moments after taking liability away, the industry started throwing every vaccine they had in development right into our children because they have no responsibility to it. Who wouldn’t do it? 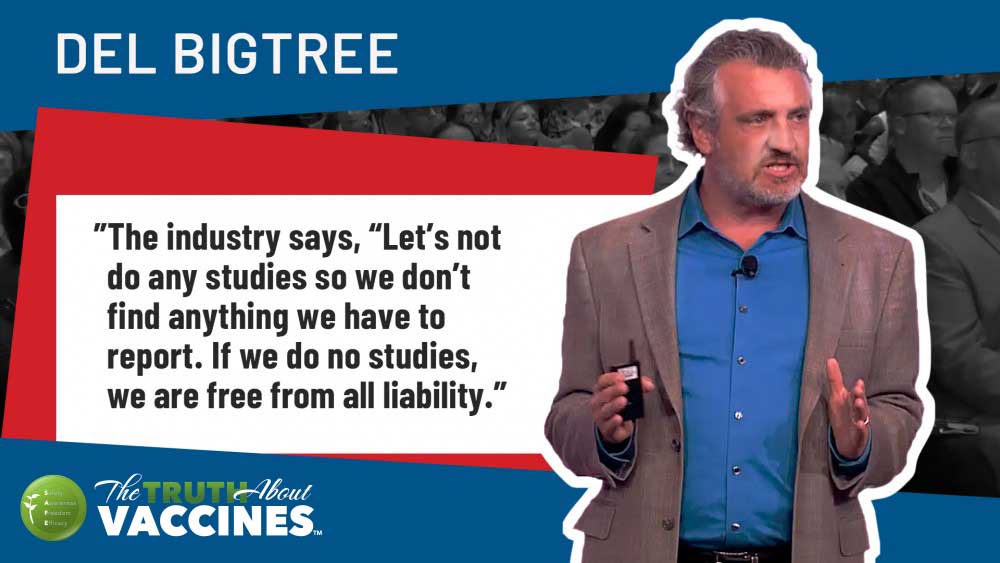 Are we going to just simply try and vaccinate ourselves from every single molecule blowing through the air? Where does this stop?

And when this wave of vaccines is coming, who is going to be doing all the safety studies to make sure that every single one of them that comes on the market is safe? This is who: your government, Health and Human Services.

This is how this works. The 1986 Vaccine Compensation Act puts Health and Human Services in charge of all vaccine safety studies. They oversee the FDA, the CDC, HRSA, and NIH, who are all a part of different parts of the vaccine program, approving them, putting them on the childhood schedule, defending them in court, which I will get to in a little bit.

So, let’s talk about the structural conflicts of interest. If our health departments are the ones that are in charge of doing all the vaccine safety research, what would get in the way of them doing it the right way? Well, right at a broad glance we can look at this. They have several jobs.

One, vaccine safety. They are actually mandated by the ‘86 Compensation Act to make sure that vaccines are made safer and safer, and safer every single year. They are supposed to have a task force making sure that there are fewer and fewer adverse events that are taking place.

But at the same time, they have the job of promoting vaccines all over the country as the greatest development of the modern age.

And on top of promoting vaccines, they have to defend vaccines in court. When they actually do injure your child or do injure you, you don’t sue the manufacturer, you sue the Secretary of Health and Human Services. You are suing your own government.

Imagine that. The people that have to point out the problems in the vaccines, discover the vaccines, can have that used against them in court. Do you see any sort of conflict there that may get in our way?

So, let’s talk about “how does safety work in our health department”? This is on the FDA’s website, and it says, “Vaccines undergo rigorous and extensive testing to determine their safety and effectiveness.” We’ve all heard that, right? That’s pretty much what we thought was happening.

I can tell you as a producer on the daytime talk show, The Doctors, where all we said was, “Vaccines are the greatest invention of the 20th century. They save lives. They are important. Everybody must get them. They are safe and effective.” I was under the impression that they were being tested for safety and going through all the rigors that every single drug that we take is.

And the scientists involved in the study have no idea who got what. Therefore when they track each patient they find out who is having more cancer. Are there people having more mutagenic effects? Meaning their genes are mutating. All sorts of health issues. And we watch them for 4.8 years to see what develops. It’s a great way to do it. That’s how science works in the medical industry.

Another one. Enbrel. 6.6 years, same thing. Saline injection to the placebo group so that we could track what was actually happening.

Now let’s look at vaccines. This is hepatitis B. There’s two brands that are on the market. Look at that number, folks. The safety review period was not five years, six years. Four days and five days. This is a vaccine that is given to day 1 old babies the moment they enter the world. “Hello, welcome to the earth. You are gasping for your first breath and here comes your first sexually transmitted disease.” A disease that, by the way, you can only catch by sharing heroine needles or sleeping with prostitutes. Now, I don’t know how you plan on raising your child, but at day 1 that’s not a concern of mine.

People are having Child Protective Services called on them if they try to deny giving this vaccine to their baby and get out of the hospital. And by the way, coinciding with this is the fact that we have more babies die on the first day of life in the United States of America than every other industrialized nation combined.

So, I say, “What is one of the major things that we do differently than all of those nations?” This stupid vaccine. This useless, pointless, stupid vaccine that should never, ever have gone into our babies. How is the placebo group? No placebo group.

Ty Bollinger: We hope you learned a lot from this video. If you did learn something new, please take a few seconds to let us know in the comments section below.