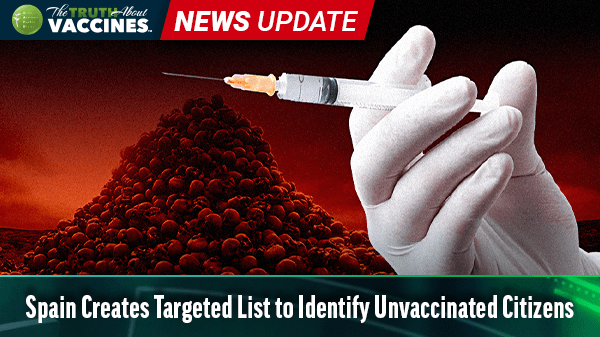 In Spain, government officials already have plans to target people who do not submit to coronavirus vaccines. Health Minister Salvador Illa warned that anyone who refuses the shots will be put on a government registry list. He said the list will be shared with all “European partners” as governments around the world strategize ways to take away individual rights and coerce people to take the shots. Mr. Illa assured the public their “data would be protected” as the list is shared across the European Union. This meaningless assurance is a slap in the face to the people who are being targeted by the government in the first place.

The threat of being put on a government hit list is a form of social ostracizing that illegally and unethically coerces people to submit to pharmaceutical and government decrees. The method uses psychological fear tactics and peer pressure to force obedience and coerce people to give up their right to body autonomy, informed consent and medical privacy. Targeting people for not vaccinating is now accepted as normal behavior across the European Union. This unethical human rights abuse is a form of terrorism and violates the Nuremberg Code of medical ethics.

This list could ultimately be used to withhold health care from people who do not vaccinate — a common threat that is often used online. The list could be used in discriminatory ways to withhold treatments from people who are viewed as “threats to public health.” The people on the list could be subjected to other unnecessary medical requirements and be forcibly detained and isolated, without due process of law. The list could also be used to deny the targeted people any help, public housing, food or other safety net programs. People on the list could be denied stimulus checks and tax breaks, as they are forced to pay fines for living healthy and normal, unvaccinated lives.

Drunk with power, many governments around the world now believe they own the bodies of every single person, plunging the world into a dark age of vaccine slavery. Governments and corporations are plotting ways to roll out “vaccine passports” that give people artificial permission to return to work, enter stadiums, board flights, attend concerts, etc. These vaccine passports would segregate anyone who doesn’t comply with the new vaccine world order. Canada is exploring a tracking and surveillance system just like this, and major airlines have already introduced their coercive vaccine passport plans.

As individual conscience is trampled and medical rights destroyed, governments and corporations would technically own all human beings, enslaving them to a society where all humans must submit to endless pharmaceutical decrees in order to associate with one another, congregate, buy and sell.

The U.S. must lead the world and respect individual rights

In just two weeks, Operation Warp Speed distributed approximately 11.5 million doses of coronavirus vaccines to hospitals across the US. Even though the distribution was a historic feat, only 2 million people took the first dose. It appears that over 80 percent of the experimental doses are being rejected, ultimately stalling the government’s plan to distribute 20 million doses by year’s end. State governments are making the inoculations available in stages, targeting select groups of people instead of treating everyone as an individual. Most states have pushed health care workers and nursing home residents to take the shots first, but many people who were lumped into these groups do not want to be treated as if they are an experimental animal, lumped into a herd, anticipating inoculation.

Of those convinced to get the vaccines, thousands have experienced health problems that disrupt their normal way of life. In many cases, these health effects have led to hospitalization and the need for further medical intervention. The FDA is monitoring the situation and the Vaccine Adverse Events Reporting System is gathering preliminary data on these vaccine-induced health emergencies.

As the evidence of harm surmounts, the US must reject the one-size-fits-all vaccine mandates. US leaders should begin to respect individual rights again. As a so-called “free country,” the US must practice what it stands for and promote health freedom to every corner of the world. If the US does not lead, the world may soon plunge into a dark era of vaccine slavery and wide-scale segregation of the unvaccinated.

This article was originally published on January 4th by Lance Johnson on naturalnews.com. It has been shared here with permission from the author. Click here for the original article.