You are here: Home / Top Picks / More Polio Caused by Vaccine Than Wild Virus – WHO Confirms 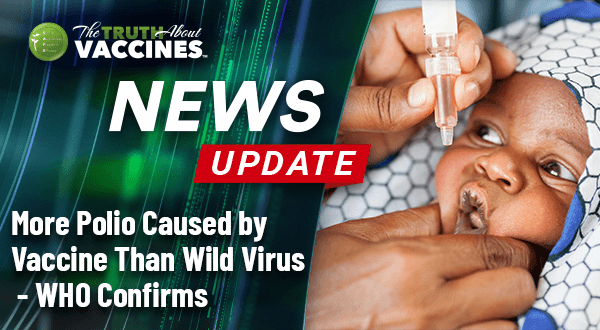 In a world where advocates for vaccine safety are increasingly persecuted, new data corroborated by the World Health Organization has confirmed that more children are being paralyzed by the polio vaccine than the original virus. Their solution? More vaccines.

Recently, the WHO announced in a press release that their Emergency Committee had reviewed data on wild poliovirus and poliovirus caused by vaccines. The results are shocking. Thanks to new data emerging from several African nations, the WHO has confirmed that more children are being paralyzed by vaccine-induced polio than those infected by polio in the wild.

Roughly a dozen African nations have now confirmed polio cases caused by the vaccine. Several Asian nations have also been affected by vaccine-derived viruses, including the Philippines, Myanmar, China, Afghanistan, and Pakistan.

How Vaccines Cause Polio

As you probably already know, the polio vaccine contains an attenuated (weakened) strain of the poliovirus. This allegedly inactive virus is meant to stimulate an immune response that would protect recipients exposed to the wild virus. But it doesn’t always work that way.

Even Dr. Jonas Salk, the creator of the inactivated or “killed-virus vaccine” used in the 1950s, “testified that the live-virus vaccine (used almost exclusively in the U.S. from the early 1960s to 2000) was the ‘principal if not sole cause’ of all reported polio cases in the U.S. since 1961.” (Washington Post, September 24, 1976)

Here’s what can happen… in the WHO’s own words:

When a child is immunized with the oral polio vaccine, the weakened vaccine-virus replicates in the intestine for a limited period… During this time, the vaccine-virus is also excreted… this excreted vaccine-virus can spread in the immediate… before eventually dying out.

On rare occasions, if a population is seriously under-immunized, an excreted vaccine-virus can continue to circulate for an extended period of time. The longer it is allowed to survive, the more genetic changes it undergoes. In very rare instances, the vaccine-virus can genetically change into a form that can paralyze – this is what is known as a circulating vaccine-derived poliovirus (cVDPV).”

Remember – VDPV means a polio virus caused by the vaccine.

This is referred to as vaccine shedding, when people who have recently received a vaccination are able to infect others with the virus. A quick Google search will tell you that vaccine shedding is essentially a myth, and that the only time it really happened was with the oral polio vaccine in the 1950s.

The Wikipedia entry regarding vaccine shedding starts off by calling it an “anti-vaccination trope,” even though it goes on to say that viral shedding is part of the mechanism of virus transmission. This is the first result when searching “vaccine shedding.”

The second result is from Very Well Health, which makes it clear from the start that vaccines are totally safe. “Despite concerns about viral shedding, live vaccines play an important part in combating deadly infections. See why they are safe and not contagious,” the article says.

These sources all say that the only vaccine to have caused any significant number of infections is the oral polio vaccine (OPV) in the 1950s, and that the vaccine is no longer used. But that is a flat out LIE. A 2016 study published in the medical journal Vaccine confirmed that the live attenuated influenza vaccine (the flu shot) did result in vaccine shedding of the live virus in some cases.

But it’s now 2020, and children are STILL suffering significant harm as a result of these vaccines. Now we have the proof. There were over 100 documented cases of polio caused by vaccines last year, and the WHO has acknowledged that these cases are spreading internationally. It’s a huge problem that no one seems to be willing to talk about.

That’s probably because the news that a vaccine is causing more harm to children than the actual virus is bad for business. It’s pretty hard to stand there with a straight face telling people that vaccines are totally safe and effective while children are literally suffering paralysis as a result.

This is news that health organizations don’t want to admit. Just look at what’s been happening in Pakistan over the past few months.

In November, Pakistani officials were accused of covering up an outbreak of type-2 poliovirus. All of these cases have resulted in the paralysis of children under 5. Sources say that the P2 virus came from the vaccine, not the wild virus.

According to The Guardian,

the new cases were allegedly kept hidden from the government and from international donors, including the UK’s Department for International Development, under direct instruction from Babar Bin Atta, the prime minister’s focal representative on polio eradication, who was last month forced to resign after he was accused of corruption.”

Health officials would have you believe that this was a simple case of mismanagement. They claim that the P2 virus had been eradicated and that the wrong vaccine was used. But that doesn’t explain the influx of vaccine-induced polio sweeping through nearly two dozen nations on two separate continents.

And the P2 virus isn’t the only strain being caused by the vaccine.

In the Philippines, there have been at least 11 confirmed cases of polio caused by vaccines this month. These include cVDPV1 and cVDPV2. Three cases of cVDPV1 confirmed in Malaysia are genetically linked to the Philippines infection.

Don’t let anyone tell you that this is an “isolated incident.” It is multinational, involves multiple strains, and is severely injuring children. And here are some important stats to remember:

And yet, there is more and more legislation every week that seeks to force people to vaccinate themselves and their children. The propaganda machine, fueled by the media and the pharmaceutical companies that sponsor them, wants you to believe that vaccines are safe and effective.

But they aren’t. So why should you be forced to roll the dice with your child’s safety?

And here’s the kicker: The WHO’s solution to the outbreak of VDPV is to inundate the affected countries with MORE VACCINES.

The WHO believes that the outbreaks of cVDPV2 are the result of poor hygiene and low vaccination rates (which is partially true; poor hygiene and malnutrition are major factors in the transmission of disease). The report by the WHO Emergency Committee stated that the risk of outbreaks in new countries is “extremely high, even probable.”

…to combat a lethal polio outbreak…

…that was CAUSED BY THE TYPE-2 POLIO VACCINE!!!

If it sounds crazy, here’s an excerpt from the official press release:

The rapid emergence of multiple cVDPV2 strains in several countries is unprecedented and very concerning, and not yet fully understood.

Since the last meeting, cVDPV2 has spread through West Africa and the Lake Chad area, reaching Cote d’Ivoire, Togo, and Chad, and cVDPV1 has spread from the Philippines to Malaysia.

The Committee strongly supports the development and proposed Emergency Use Listing of the novel OPV2 vaccine which should become available mid-2020, and which it is hoped will result in no or very little seeding of further outbreaks.”

No, you’re not crazy.

The WHO admits that VDPV is “unprecedented and very concerning.”

They acknowledge that the risk of VDPV spreading to more countries is “extremely high.”

And they want to develop and use a second vaccine that they “hope” won’t result in even more outbreaks.

This is the world in which we live. We have been so brainwashed to believe that vaccines are safe and effective that international health agencies are willing to throw gasoline on the fire before admitting that there’s a problem.

Concurrently, pharmaceutical companies continue to create more vaccines (generating enormous profit), which the CDC promptly introduces to the recommended childhood schedule. Additionally, manufacturers in the U.S. are relieved of any liability for injury or death resulting from their products. Plaintiffs are instead required to go through the Vaccine Injury Compensation Program (VICP), in which victims end up suing their own government in a specially appointed court.

The lack of adequate studies makes it hard for the plaintiff to prove that vaccine manufacturers are at fault. And as long as the manufacturer isn’t aware of any harmful effects, they retain immunity against legal action. This has resulted in a system in which it is in the company’s best interest NOT to conduct thorough safety studies.

Legislators are pushing aggressive agendas to force Americans to vaccinate themselves and their children, regardless of the risk. News outlets and social media platforms are viciously slandering and censoring anyone who speaks out about vaccine safety or our constitutional right to make decisions about our medical care.

Today, the world has decided that the best way to help African and Asian children who have been severely injured and killed by an unsafe vaccine is to introduce another one. They will be sending in representatives and using legislation and propaganda to force vaccinations on as many of them as possible.

How long before this kind of willful ignorance plays out in your hometown?

Go here to learn how you can get involved.

The Truth About Vaccines 9-Episode Docu-Series