You are here: Home / Medical Tyranny / Adam Schiff: Enemy of the People 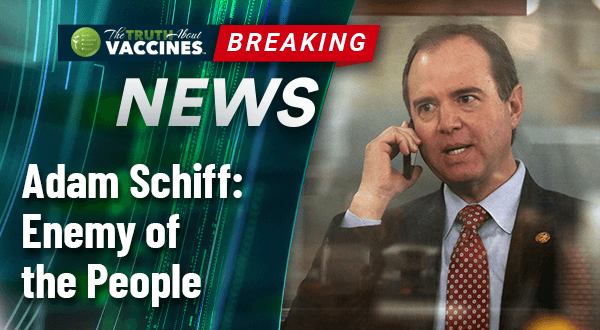 Editor’s Note: This post was originally published on The Truth About Cancer.

Earlier this week, a lawsuit was filed accusing Adam Schiff of violating First Amendment laws. The democratic representative from California has been accused of abusing his political power and infringing on the right to free speech by the Association of American Physicians and Surgeons, or AAPS.

AAPS is a non-profit organization that seeks to uphold the Hippocratic Oath and preserve the sanctity of the patient-physician relationship. According to the lawsuit, Rep. Schiff has used his political influence to silence and censor information about vaccine safety.

In early 2019, Schiff contacted tech giants like Google, Amazon, and Facebook, asking them to bury or discredit any vaccine information that Schiff didn’t like. Within 24 hours of receiving the letter, Amazon removed the popular videos Vaxxed and Shoot ‘Em Up: The Truth About Vaccines from their streaming platform.

Schiff posted the letters he had sent – along with a press release – on the government-owned house.gov website.

AAPS, which is generally considered to be a non-partisan and unbiased source of information, were also affected due to some of their articles regarding vaccines and medical freedom. On platforms like Facebook and Twitter, searches for AAPS articles about vaccines suddenly began directing users to sites like the World Health Organization, National Institutes of Health, and the Centers for Disease Control.

On Twitter, a new policy announced last May has resulted in a disclaimer being displayed above articles discussing vaccine safety and patient freedom. “Know the Facts. To make sure you get the best information on vaccination, resources are available from the US Department of Health and Human Services.”

Even Google has committed to this attempt to silence free speech and destroy patient’s rights. In the Spring of 2019, Google launched a series of algorithm changes that they said were designed to help promote more reliable information. And although the company has been relatively secretive about the parameters they use to determine what information is trustworthy, we can see that they tend to favor government bodies like the CDC and NIH.

The CDC says vaccines are safe and effective, so anyone who doubts them must be crazy. The agricultural industry says GMOs are totally fine for consumption, so anyone questioning them must be a quack. Secretary of Agriculture Sonny Perdue says glyphosate doesn’t cause cancer, so it must be true.

The AAPS suffered the same setbacks we have seen here at TTAC, with traffic to their website dropping significantly after Schiff’s letter and Google’s subsequent algorithm update. AAPS Executive Director Jane Orient, M.D. has even clarified that AAPS is not “anti-vax,” but that they support informed consent and patient rights.

“The internet is supposed to provide free access to information to people of different opinions,” she said. “AAPS is not ‘anti-vaccine,’ but rather supports informed consent, based on an understanding of the full range of medical, legal, and economic considerations relevant to vaccination and any other medical intervention, which inevitably involves risks as well as benefits.”

Doctors Stand Together Against Tyranny

The AAPS have been staunch supporters of patient rights and informed consent for decades. Information published on their site includes: a resolution to put a moratorium on vaccine mandates; an article highlighting the importance of informed consent in vaccine administration; and an open letter to the California legislature opposing SB 276, which stripped patients and doctors alike of their right to informed consent, instead handing that power to the state government.

“The traditional ethic in the Oath of Hippocrates requires physicians to refrain from deliberately harming patients. The State of California is denying patients the protection of this code and is instead imposing on them the judgment of a government agency, the Department of Public Health. Unlike physicians, these officials have no accountability for harm that individual patients may suffer,” the letter states.

“Vaccines are unavoidably unsafe, as recognized by the U.S. Supreme Court, and also by Congress in establishing the Vaccine Injury Compensation Program. Most doctors nevertheless recommend many vaccines, as they believe the benefit to the patient exceeds the risk. The public health authorities, on the other hand, may impose their dictates on the presumption that the overall benefit to the population, as they calculate it, overrides individual rights or more than counterbalances any adverse effects that individuals may endure.”

But Adam Schiff seems to have a problem with that sentiment – and he’s willing to abuse his power to stop it. Currently serving his 10th consecutive term as a U.S. Congressman, bouncing around various districts in the greater Los Angeles area, this isn’t Schiff’s first time meddling in patient issues. In a resolution proposed by Schiff (called the Vaccines Save Lives Resolution), he makes very strong statements about vaccines:

“The scientific and medical communities agree – vaccines are both safe and effective and there is no evidence to suggest that vaccines cause life-threatening or disabling diseases,” said Rep. Schiff. “Vaccines have saved millions of lives worldwide and prevented suffering for millions more. The importance of vaccinating your children, especially given the recent outbreak of preventable diseases, cannot be overstated.”

But many in the medical arena would disagree with him. In fact, even the manufacturers and his own government disagree with him, betrayed by their own package inserts and the Vaccine Injury Compensation Program.

The AAPS sums up the heart of the issue well, saying in one article: “There is the philosophical issue of how much risk a person can be compelled to take, even to save the life of another. Tort law creates no “duty to rescue.” Should we override a religious objection or reluctance to take a risk because an unvaccinated child might get measles and might expose a child who can’t be vaccinated if there is a measles outbreak? Once we place the collective over individual rights, where do we draw a line?”

Adam Schiff, sometimes referred to as “shifty Schiff” by the President, wants you to believe that any information that even questions vaccines is “misinformation” and “anti-vax propaganda.” But what this really boils down to is freedom.

Freedom to share the truth with people who may not have it.

“The First Amendment protects the rights of free speech and association. Included within the right of free speech is a right to receive information from willing speakers,” the AAPS lawsuit states. “Under the First Amendment, Americans have the right to hear all sides of every issue and to make their own judgments about those issues without government interference or limitations. Content-based restrictions on speech are presumptively unconstitutional, and courts analyze such restrictions under strict scrutiny.”

Snakes in the Grass

In a world with so much evil, we need only to look in our own backyard to find the snakes in the grass. Every totalitarian government throughout history has enforced its authority by censoring free speech and silencing those who speak out against them. In a free society, in the greatest nation the world has ever seen, we must continue to fight for our freedom.

Adam Schiff is an enemy of the people. He is a tyrannical liar who is using his political influence to silence those who speak against him and his Big Government agenda. He wants you to believe that vaccines are 100% safe, 100% effective, and should be 100% controlled by the government.

But Adam Schiff is wrong.

We know these vaccines aren’t totally safe because the manufacturer prints it on the label. We know they aren’t totally effective because vaccinated children and adults have been known to contract the disease they’ve been vaccinated against. We know that children are getting sick and dying as a result of these vaccines, because our own government has paid families billions of dollars for their suffering.

I don’t want to live in a world where my children are forced to receive a drug without consent, against the recommendation of their doctor, and with their lives literally at stake just so that Adam Schiff can feel a little more powerful and the drug companies can make a little more money.

I’m not willing to give up my constitutional freedoms just because some shifty politician wants me to.