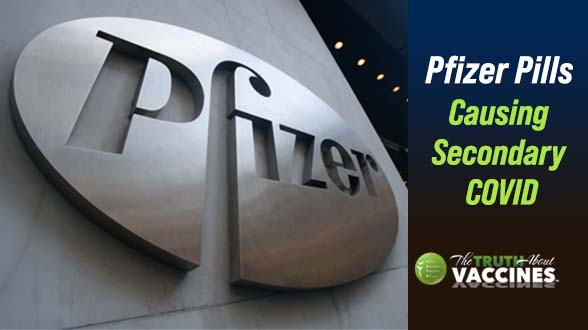 Just before Christmas of 2021, the FDA awarded Pfizer Emergency Use Authorization (EUA) for its new COVID pill. Paxlovid, as the drug is called, has been heralded as a quick and effective way to combat the SARS-CoV-2 outbreak, with many hoping that a pill form of treatment will help persuade the hundreds of thousands of Americans who have declined COVID shots.

But there may be a fatal flaw with Pfizer’s latest drug: Patients who take Paxlovid are reporting secondary cases of COVID-19.

More than 2.8 million courses of Pfizer’s Paxlovid have been made available at pharmacies around the United States, with the Biden administration working to improve access to the drug. But, as Paxlovid has become more widely used, some patients have reported that COVID-19 symptoms recurred after completing treatment and experiencing improvement.

Often referred to as a “rebound” or “relapse” of COVID-19 after taking the standard five days of Paxlovid pills, experts say key questions need to be answered around why it happens, who is being affected, and how doctors should handle the cases.

For example, one report from Veterans Affairs doctors describes a 71-year-old man who saw his COVID-19 symptoms quickly clear up after two days of taking the drug. But four days after finishing the full course of Paxlovid, his symptoms returned for a few more days.

The Centers for Disease Control and Prevention has been consulting with the National Institutes of Health over potential data sources that can be used to study the cases, a CDC spokesperson said in a statement. No NIH studies are underway yet, the NIH said in a statement, though federal scientists are “actively discussing” ways to investigate the phenomenon.

It’s unclear how often “post-Paxlovid rebound” occurs, but UC San Francisco Department of Medicine chair Dr. Robert Wachter said he knows of at least one person who completed Paxlovid treatment and then became infectious again, spreading the virus to other family members.

“It can happen,” Wachter tweeted. “If you develop recurrent symptoms and have a [positive] rapid test, you are infectious. Please act accordingly.”

I know of at least one case in which someone w/ post-Paxlovid rebound infected several other people (family members) during phase 2.
So at least per this n-of-1, it can happen. If you develop recurrent symptoms and have a + rapid test, you are infectious. Please act accordingly.

“They’ve happened in a significant enough number that they’ve been noticed by lots of folks in lots of different places,” she said.

Even California (who ranked 47th in efficacy of state COVID response) seems to agree that this phenomenon is “real,” and “can happen.” More importantly, these health officials from the Golden State seem to acknowledge that people who take Pfizer’s COVID-19 pill and recover, may experience subsequent infection and have the capability of infecting others.

Still, most health officials recommend the use of Paxlovid for anyone who tests positive or is experiencing COVID symptoms. What happened to “stopping the spread?” (That’s not rhetorical; we really want to know.)

Pfizer’s response is twofold. First, they brush aside the reports of secondary infection as uncommon. No big deal. Nothing to see here.

“We do surveillance of patients in very large databases. And we have access to more than 300,000 Paxlovid treated in one of the databases. We have reports of this happening in about 0.005% (1 in 200, not a great statistic for a drug that’s causing the very disease it’s meant to cure) or less,” Dr. Mikael Dolsten, Pfizer’s chief scientific officer, told the company’s investors during an earnings call this week.

Around 2% of patients saw a rebound in Pfizer’s clinical trials of Paxlovid, the company’s executives said. “It’s not really related to Paxlovid, but more to the individuals that then need to clear the virus. And it is a virus that can either reinfect patients or there can be reservoirs left in the patients,” Dolsten said.

Of course: blame the patients. If the amount of COVID leftover from the COVID drug is enough to make you sick again, that’s YOUR fault.

Their second response (which is ingenious from a business standpoint) is to throw more Paxlovid at the Paxlovid problem.

Top executives at Pfizer said patients who have symptoms come back after finishing off the five-day treatment could simply start a new round of the pills. “It could be that in some cases, there is a rebound. That was why the label speaks about the second treatment that can be given,” Pfizer’s CEO Albert Bourla told investors.

The CEO told Bloomberg that patients can take another course, “like you do with antibiotics.” “Paxlovid does what it has to do: It reduces the viral load,” Bourla continued. “Then your body is supposed to do the job.”

Oh, like natural immunity? Even the FDA, which has an extremely close relationship with Pfizer, was skeptical:

The Food and Drug Administration says that there is “no evidence” that taking more pills of Paxlovid will help patients who see a resurgence of the disease. Here’s the full FDA statement:

“We are continuing to review data from clinical trials and will provide additional information as it becomes available. However, there is no evidence of benefit at this time for a longer course of treatment (e.g., 10 days rather than the 5 days recommended in the Provider Fact Sheet for Paxlovid) or repeating a treatment course of Paxlovid in patients with recurrent COVID-19 symptoms following completion of a treatment course.”

A spokesperson for Pfizer declined to comment “on conversations between medical professionals,” but said that “there are no limitations” in the FDA’s emergency use authorization for treating “subsequent COVID-19 infections” in eligible patients.

However, doctors caution that even the theoretical argument for an additional course remains tenuous — and that a second round of pills is not without its downsides.

While Pfizer and the FDA say they have not spotted any signs of resistance to Paxlovid in rebound cases so far, experts warn that increased use of the drug could increase the risk of the virus evolving resistance.

Want to know why drug resistance is such a big problem?

“We have no data to support that a second course really is a benefit. Anecdotally, most people simply get better. We have a lot of theoretical reasons why maybe that second course isn’t needed,” says Dr. Roy Gulick, chief of the division of infectious diseases at Weill Cornell Medicine.