You are here: Home / News / Infant COVID Shots Could Arrive Next Month 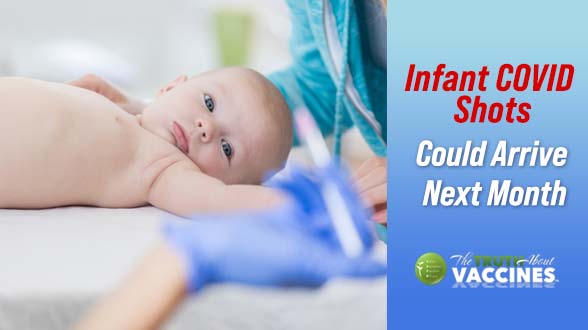 As COVID cases continue to decline and lockdown measures fade into memory, the pharmaceutical industry is continuing its mission to inject every man, woman, and child on earth with their experimental (but lucrative) products. In just a few weeks, that could include infants as young as 6 months old.

An FDA committee will meet on June 15 to review new data from Pfizer and Moderna on their COVID shots for infants and toddlers. It’s expected that an Emergency Use Authorization (EUA) will be awarded for both shots, meaning a mass vaccination campaign for infants could begin as early as June of this year.

Pfizer says that the dose for infants and toddlers is only 1/10th of the dose for adults, although they’ve already announced that the youngest among us will need 3 rounds of the “medicine” in order to receive “the best protection.”

“We know parents are anxious for us to determine if these vaccines are safe & effective,” the FDA said in a post Monday on Twitter. “We are working as quickly as possible to carefully review all the data.”

The FDA’s committee of independent experts will review the safety and efficacy data of the vaccines in an open public meeting and make a recommendation on whether the agency should authorize the shots. The FDA is not obligated to follow the committee’s recommendation, though it usually does.

But even these “independent” committees are hard to trust.

When a new therapy is up for FDA approval, advisory committees are formed to review the new drug and vote on whether or not it should be approved. The FDA always follows these recommendations.

But a look into the finances of these committee members paints a more sinister picture. Physicians who sit on these advisory boards nearly always end up taking money from the companies relying on their votes. These bribes are not well-masked, showing up as consulting fees, travel compensation, or research grants.

“An analysis of pharma payments to 107 physicians who advised FDA on 28 drugs approved from 2008 to 2014 found that a majority later got money for travel or consulting or received research subsidies from the makers of the drugs on which they voted or from competing firms.”

The FDA announced the June date hours after Pfizer and BioNTech said their three-dose vaccine for children ages 6 months to 5 years old was 80% effective at preventing illness from the omicron Covid variant based on preliminary data from a clinical trial.

The FDA and Pfizer had originally sought to fast-track authorization of the first two doses in February during the winter omicron wave. However, Pfizer decided to delay its application to wait on data from the third shot after the first two doses only had 30% to 40% effectiveness against omicron.

Kids from ages 5 to 11 have been eligible for the COVID-19 vaccine since last November. For hints about when younger kids might be able to receive the vaccines, here’s a look at how that earlier process played out:

October 7: Pfizer formally asked the FDA for Emergency Use Authorization of its vaccine for children ages 5 to 11, after saying it was found to be safe and effective

October 22: The FDA released the companies’ briefing documents, as well as its own analysis

November 2: The CDC recommended Pfizer’s vaccine for the age group; it became widely available within one week afterward

Based on the timeline for the last EUA, we can expect the U.S. to begin injecting babies before Independence Day. Nevermind that children in this age group have virtually no risk of severe illness or death. Conveniently, the CDC only tracks COVID data for ages 0-17, but Worldometers has determined that the chance of death in children aged 0-9 is virtually zero.

On top of that, a study published in The BMJ found that health officials in the United States have exaggerated the number of deaths among children. According to the study:

“The US’s health protection agency has reduced the number of deaths it is attributing to covid-19 by more than 70,000 after what it referred to as ‘coding logic errors’ were highlighted on social media.

On 15 March the Centers for Disease Control and Prevention (CDC) removed 72,277 deaths, including those of 416 children, from its Covid-19 Data Tracker, which has been posting real time data collected from more than two dozen state health departments since April 2020.”

You can also forget about the CDC’s own Vaccine Adverse Event Reporting System (VAERS), which has already identified 28,312 deaths associated with the COVID shots (accompanied by an astounding 1,277,978 injuries).

This isn’t about safety or protection; it never was. This is about control and money. Soon, we can expect daycare centers and preschools to require the COVID jab for admission. And companies like Pfizer will continue to generate billions of dollars by selling these dangerous, unnecessary, ineffective injections to the U.S. government.

Our children will continue to be injured and killed, and it’ll all be paid for with your own tax dollars. The FDA needs a massive overhaul. That starts with elected officials and business owners who will stand up and say no to this lunacy.