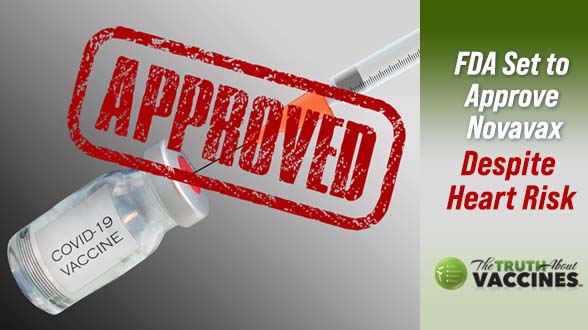 An FDA advisory board this week recommended Emergency Use Authorization (EUA) for Novavax’s COVID-19 shot. The FDA’s committee of “independent vaccine experts” voted 21 to 0 with one abstention at the end of an all-day meeting to recommend authorizing the shot for use in the U.S. after an all-day public meeting in which it weighed safety and effectiveness data.

The FDA is not obligated to follow the committee’s recommendation, although it almost always does. Physicians who sit on these advisory boards nearly always end up taking money from the companies relying on their votes. These bribes are not well-masked, showing up as consulting fees, travel compensation, or research grants.

“An analysis of pharma payments to 107 physicians who advised FDA on 28 drugs approved from 2008 to 2014 found that a majority later got money for travel or consulting or received research subsidies from the makers of the drugs on which they voted or from competing firms.”

The agency could clear Novavax’s vaccine for distribution in the U.S. as soon as this week. The shot would be the fourth Covid vaccine authorized for use in the U.S. and the first new one since the Johnson & Johnson vaccine was cleared in February 2021.

Novavax’s vaccine is made using small laboratory-built pieces of the coronavirus to stimulate immunity. This protein-based approach is a more traditional one for vaccine development than the mRNA vaccines from Pfizer/BioNTech and Moderna.

The shot works by introducing a replica of the coronavirus spike protein into the bloodstream along with adjuvants to trigger an immune response, hopefully “training” the immune system to recognize and combat the coronavirus if it is ever encountered.

Novavax had hoped that the more “traditional” shot would win over those who had concerns about the mNRA shots. But just like the mNRA shots developed by Pfizer and Moderna, the Novavax jab seems to come with some serious risks.

Less than a week ago, the FDA raised concerns about the risk of myocarditis (heart inflammation) associated with the shot. Here’s what the FDA’s own report found:

Aside from the cardiac inflammation risks, the FDA staffers also cited tenderness at the injection site, headache, fatigue and muscle pain as immediate reactions. They also mentioned hypersensitivity and swelling of the lymph nodes as reactions linked to the Novavax shot. There was also one case of Guillain-Barre syndrome – which is “known to be associated with other [COVID-19] vaccines” – observed during the Novavax clinical trial.

Nevertheless, the advisory committee recommended just a few days later that the FDA award EUA to the Novavax shot. Committee member Dr. Jay Portnoy, a professor of pediatrics at the University of Missouri-Kansas City School of Medicine, said he sees the vote as an opportunity.

“This is a different technology. It’s a more traditional protein-based vaccine,” Portnoy said. “The vaccine deserves the opportunity to be given and studied.”

Even the so-called experts advising the FDA know that these shots are experimental. They want to introduce them to the U.S. so that they can use us as guinea pigs.

There have been 1,287,593 adverse reactions to the COVID shots reported to VAERS (Vaccine Adverse Event Reporting System). There have been 160,701 hospitalizations and 28,532 deaths reported. How many more have to be injured or killed? How many cases of heart inflammation are enough to put an end to this pharmaceutical hoax?

You can expect the Novavax shot to be available at a pharmacy near you sometime this month. You can expect ads and other propaganda telling you that the shot is “safe and effective” and that this is a “traditional” vaccine that you can trust.