You are here: Home / Medical Tyranny / Rhode Island Wants to Fine and Tax the Unvaccinated 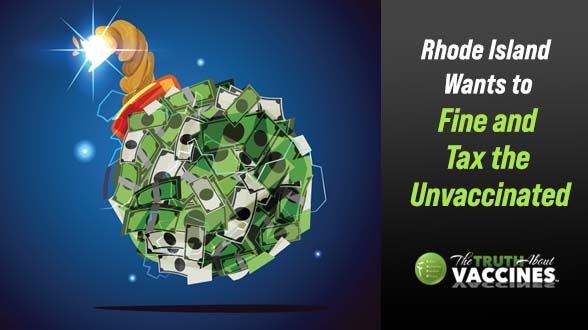 Over the past 2 years, those who have elected not to receive shots for COVID-19 have been punished. Denying entry to gyms, restaurants, and theaters was touted as a way to protect the American public. When people were barred from visiting loved ones in nursing homes or fired for refusing the jab, that, too, was considered to be in the public’s best interest.

In Rhode Island, legislatures now want to fine and tax the unvaccinated, an apparent punishment for those who refused to comply with the CDC’s recommendation. Under Senate Bill 2552, Rhode Islanders over age 16 who don’t get the COVID-19 vaccine could face $50 monthly fines and have to pay twice as much state income tax as their vaccinated counterparts.

Democrat Senator Samuel W. Bell, who initially proposed the legislation, says that his state is still dealing with a “crisis” regarding COVID.

“Thousands of Rhode Islander have died. I’ve had really painful calls from constituents who can’t go to the store because they’re immuno-compromised, who have lost loved ones to this pandemic, who are really ill and not fully recovered, suffering long-term effects,” said Bell

He says his young child has a lung disease that would put him into the high-risk category.

“My son’s condition has made me feel more compassionate and ready for the heavy level of abuse I knew I’d receive,” he said. “I love my son more than I can put into words, and the idea of him not being able to interact with people and to go to school – those things terrify me. And I’m not the only parent of a child with a serious immune condition.”

But the bill has been wildly unpopular with Rhode Islanders. Republican Senator Jessica de la Cruz has been running an email campaign in opposition to the bill. In one email, she said:

“I have not, nor will I ever support, legislation that coerces Rhode Islanders into making medical decisions or face steep financial damages. I hear my constituents and others around the state loud and clear – this is dangerous legislation and sends the message that our government doesn’t trust you to make the right choice for you and your family. This is an unconscionable overreach of legislative powers.”

De la Cruz said the “good news” is that the bill stands little chance of becoming law. “That said, I’m not taking it for granted, and neither should you,” she wrote. Her fellow Rhode Islanders seem to agree with her.

On Twitter, people expressed their outrage over the “Vax or Tax” bill. Some questioned Bell’s financial contributions from Big Pharma while others questioned how “Pro-choice” legislators could support a coercive bill. Others asked how the doubled income tax would be used, though an answer has yet to come.

Even some state Senators who had originally signed onto the bill have backed out. Jonathon Acosta and Tiara Mack have both removed their names from the proposed legislation, although they have not made public statements about their reasons for signing the bill initially or their withdrawal.

The bill would also require employers to keep track of their employee’s personal health records, an egregious violation of HIPPA and other privacy laws. Here’s a quote – directly from the bill – that outlines the punishment for those who refuse to comply:

The bill also stipulates that parents would be responsible for the vaccination of any children under the age of 16 who are eligible to get the shot. With shots for infants coming as soon as next month, this could effectively force parents to choose between feeding their families and compliance with the mandate.

Rhode Island’s state income tax rate is between 3.75% and 5.99%, depending on household income. With an average household income of $92,427, those who refuse to comply could be looking at an additional $7,437.16 each year… an amount most families can’t afford to lose.

With half of the bill’s cosigners already backing out, the legislation is unlikely to pass. But it should concern us that our elected officials are willing to go SO FAR to force us to take a shot that doesn’t prevent infection, doesn’t prevent transmission, loses efficacy within a few months, and which has been associated with over 27,000 deaths and over 154,000 hospitalizations.

And those numbers are according to the CDC and FDAs own reporting system.

These vaccines are untested and ineffective. To force them on the American public is unlawful and immoral. Threatening thousands of dollars in fines and arbitrary tax increases for simply exercising freedom over your own healthcare is JUST PLAIN WRONG.

It’s more important than ever before that we stop supporting elected officials who want to violate our freedom. It’s essential that we refuse to comply with unlawful mandates, no matter the cost. And it is of paramount importance that we speak the truth boldly to all who will listen.