You are here: Home / Medical Tyranny / Hospital administrators CAUGHT ON CAMERA scheming to fabricate covid numbers and SCARE the public 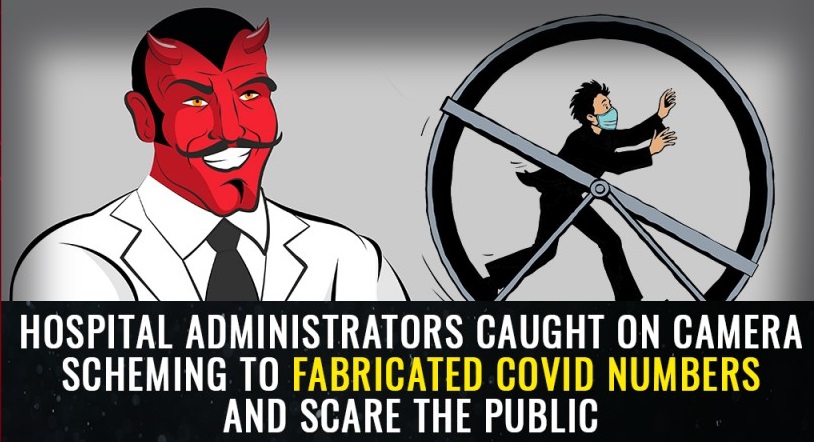 When the covid plandemic first began in early 2020, I remember thinking (at first) there’s no way this could be fake because hospital administrators and doctors wouldn’t fake covid death numbers or falsely try to scare people through deception.

Boy was I wrong.

Since the early days of the plandemic, we’ve learned that hospitals routinely “fake” covid numbers and very often claim to be overrun with covid patients, even when their beds are nearly empty. Many hospital administrators, doctors and nurses are in on the scam and seem to be ready and willing to deceive the public by fabricating covid numbers and literally killing patients to pump up the covid “death” numbers.

Now, we have proof of all this caught on a zoom video.

In a shocking video clip (included in the Situation Update podcast below), with an accompanying transcript courtesy of InfoWars.com, we see hospital marketing and administration personnel admitting they plan to deceptively count all patients in the hospital as “covid” patients. They openly discuss finding a way to make covid more “scary to the public” as a tactic to terrorize the public into taking more vaccines (which will, of course, increase the business for the hospital due to vaccine-induced blood clots).

“We need to be… more scary to the public… If you don’t get vaccinated, you know you’re going to die.” pic.twitter.com/66CcIsVR4B

This stunning video is an open exhibit revealing that hospitals have become psychological terrorism organizations that deliberately use psy-op tactics to terrorize the public. Is this the proper role of hospitals and doctors in society? When did hospital administrators decide that the ends justify the means, even if it requires terrorizing the public to gin up more business so they can bill Medicare for even more profits?

More importantly, why would any sane person ever trust any hospital ever again after watching this video? If hospitals are scheming against the public, wouldn’t they also likely be willing to harm or even kill their own patients in order to increase their profits?

Have no illusions: This is exactly what’s happening in America and around the world right now, where hospitals have become murder factories and doctors are now serial killers. It’s no longer even a secret. They openly discuss this in their “marketing” meetings.

Hospital administrators and marketers have become death cultists, pushing their covid death cult agenda with utter disregard for medical ethics or honesty of any kind. Now, they openly admit they don’t care if it takes an endless stream of lies to terrorize the public. Because that’s what the plandemic is based on, after all, and these health care lunatics are apparently 100% on board with the genocidal deception. (It should make you wonder how your own doctor is being paid off to achieve a certain milestone of vaccination rates among patients…)

At the same time, an investigation conducted by The Telegraph looked into the backgrounds of all 27 of the virologists / scientists who co-authored the February, 2020 letter published in The Lancet which claimed that SARS-CoV-2 couldn’t have been created in a lab, and that any such talk was merely a “conspiracy theory.” Astonishingly, The Telegraph found that 26 out of 27 co-authors had ties to the Wuhan Institute of Virology. In other words, The Lancet was just a mouthpiece for the Chinese Communist Party (CCP), covering up the crime of the century by lying to the world through the voices of compromised, corrupt scientists who all worked for the interests of China.

Put another way, it seems as if the entire institution of “science” is now controlled and operated by communist China, and all the major science journals, World Health Organization, CDC, FDA, Biden regime, etc., all work for China.