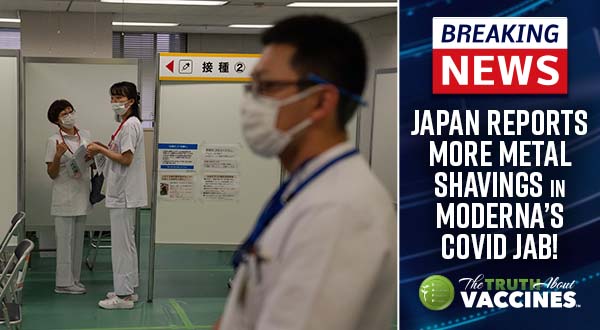 For the fourth time in less than a week, Japan has discovered foreign contamination of the Moderna COVID-19 vaccine. Kanagawa prefecture has suspended an entire lot of the product after finding several black particles in a Moderna vaccine vial.


This is a worrying trend that began last week, when Japan suspended at least 1.6 million doses of the Moderna shot after initial reports of contamination. Moderna acknowledged the cases of “particulate matter being seen in drug product vials of its COVID-19 vaccine,” but said that the suspension was “just a precaution.”

But many of these contaminated vaccines have already been administered.

The Japanese defense ministry operates a mass vaccination site in Osaka, and said it had been using doses from the contaminated lot for over 2 weeks (although they did not disclose the full number of doses administered).

Japanese airline ANA said that they had administered about 4,700 doses from the contaminated lot and stopped all vaccinations last Thursday. Other companies had also suspended vaccination events pending further investigation.

Moderna’s problems worsened 4 days later when two more contaminations were reported. The fresh reports, from Gunma prefecture near Tokyo and the southern prefecture of Okinawa, prompted two new Moderna lots to be suspended.

Japanese officials confirmed that at least two people had died on Saturday after receiving doses that were later suspended due to contamination. So far, Kanagawa prefecture estimates that roughly 4,000 people have already received shots from today’s contaminated lot.

In Gunma, a Moderna vial was contaminated with a tiny black substance, while in Okinawa, black particulate was found in vials and syringes. Pink substances were also reported in Okinawa.

Today’s contamination solidifies concerns about Moderna’s manufacturing process and brings cause for apprehension involving Moderna’s international distribution. Moderna has contracts with the European Union (and its 27 member nations) to provide 460 million doses. So far, the company has delivered about 70 million.

Moderna had already been facing production issues. At the end of July, the company announced that production delays would cause disruption to the supply chain for all markets outside of the U.S.

Moderna and Spanish pharma company Rovi, which bottles Moderna vaccines for markets other than the United States, said the contamination could be due to a manufacturing issue in one of Rovi’s production lines.

Rovi had initially said that the batch in question was only meant for distribution in Japan, but the European Medicines Agency (essentially the EU’s FDA), says it is investigating the contaminations to determine if there has been an impact on supplies in the EU.

Forget all the other issues for a moment. In the past week, millions of doses have been suspended for visible contamination. The Times reported that the contaminants were tiny metal flakes. People are having metal shavings injected into their bodies, and we still trust Moderna? We still trust the regulatory bodies in charge of protecting us?

In the EU, the administration of the shot is on the rise. This morning, France began a campaign to administer booster shots for the elderly, meaning even more doses of Moderna’s killer cocktail will be administered.

People are dying. And all Moderna cares about is their bottom line.

Moderna has long been known for their secrecy and lack of published scientific research to support their technology. Despite successfully launching the largest IPO in biotech history, many investigative journalists have compared them to the fraudulent biotech company Theranos (whose founder is currently facing criminal charges for fraud).

It’s a case of the emperor’s new clothes. They’re running an investment firm, and then hopefully it also develops a drug that’s successful.”

We’re in the wild west of medical oversight, where anything goes and the rules are made up as we go along. When the FDA “approved” the Pfizer jab, Moderna should have immediately lost its EUA status, right? After all, the EUA can only be granted if there is no other treatment approved by the FDA.

But the rules seemed to change for Moderna, with the FDA extending the EUA despite the Pfizer approval.

But according to the CDC, the FDA, the MSM presstitutes, and the turncoats in government…

Don’t ask if they are safe!

Line up like lemmings and jump over the cliff!