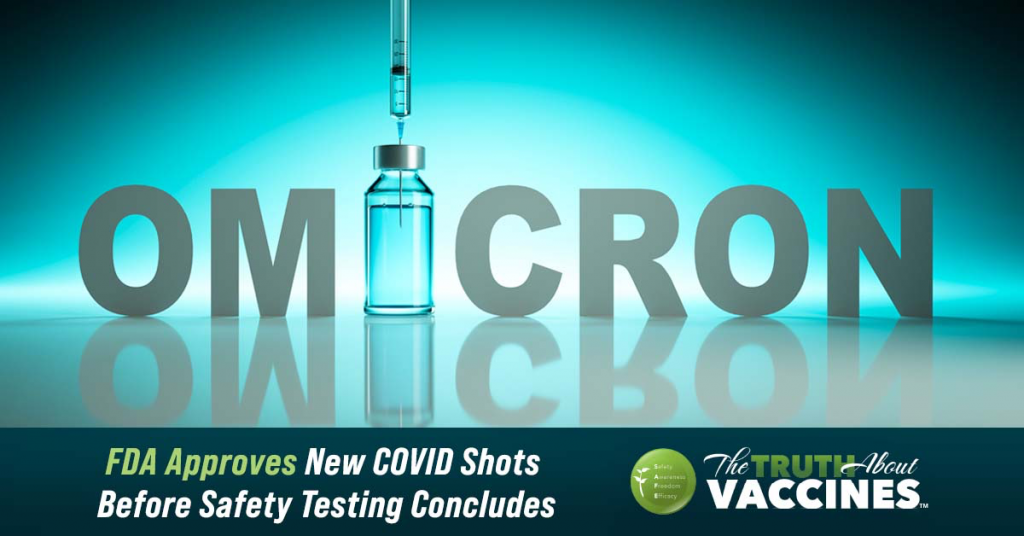 The Food and Drug Administration (FDA) has approved new COVID boosters designed to combat the latest version of the Omicron variant despite a lack of human safety studies. Moderna’s human clinical trials are currently underway but won’t conclude until after the fall. Pfizer-BioNTech has yet to begin human trials.

FDA officials said the goal for the altered vaccines is to protect people for a longer period of time and more fully—even against symptomatic infection—than the original vaccines would have if given again as boosters.

The reformulated shots targeting the now-dominant BA.4 and BA.5 subvariants are intended to be a closer match to future variants that may evolve this winter, said Peter Marks, who heads the FDA’s vaccines division.

Less than half of Americans who initially received the COVID jabs have also received boosters. That number is likely to drop even further given the startling fact that the FDA approved these new shots without any data from human safety trials. Dr. Marks says that human testing isn’t necessary:

“The FDA has extensive experience with strain changes for annual influenza vaccines,” he says. “We are confident in the evidence supporting these authorizations.”

“Real world evidence from the current mRNA Covid-19 vaccines, which have been administered to millions of individuals, show us that the vaccines are safe,” FDA Commissioner Robert Califf said in a recent tweet.

Many have compared the approval process to flu shots, which are the only other vaccines that are routinely approved without human clinical data. But that hasn’t always worked out. Side effects from the flu shot include flu symptoms, like headache, nausea, and fever. The shots also contain adjuvants and preservatives that include aluminum, formaldehyde, and thimerosal.

A 2013 study in the U.S. showed that pigs vaccinated against one strain of influenza were worse off if subsequently infected by a related strain of the virus. The researchers vaccinated piglets that were younger than 6 months old and hadn’t been exposed to flu before against H1N2 to explore whether vaccine-induced antibodies might play a role in exacerbating respiratory symptoms. They found some of the piglets got sick with severe pneumonia and had severe lung damage after they were infected with the 2009 H1N1 virus, suggesting that cross-reactive antibodies triggered by the flu vaccine made symptoms worse after infection with a different flu strain.

And all of this has occurred under the presumption that the existing COVID shots are both safe and effective. But that assumption is naive at best and negligent at worst. Despite the official narrative, the COVID shots have been an absolute disaster so far.

We were initially told that these vaccines would prevent recipients from contracting or spreading the virus. That turned out to be false, and the CDC now recommends the same protocols regardless of vaccination status.

Any positive effects from the shots were extremely temporary. A new study from August 9th found waning Pfizer/BioNTech COVID-19 vaccine protection against symptomatic infection in Brazilian and Scottish teens starting 27 days after the second dose amid the Delta and Omicron variant waves.

Perhaps more disturbing is the rate of adverse events correlated with the experimental shots. Through August 19th, there have been 1,390,594 adverse reactions, 174,371 hospitalizations, and 30,479 deaths reported to VAERS (Vaccine Adverse Event Reporting System) following COVID vaccination.

Perhaps the biggest criticism of the VAERS is the severe underreporting of adverse events (including death). Studies have confirmed that adverse reactions to vaccines are widely unreported in the VAERS system.

In a 2010 study published in the BMJ, author Peter Collignon, an infectious diseases physician and microbiologist, writes:

“The many children with adverse effects and the subsequent suspension of the vaccine challenge the assumption that regulators are ensuring the safety and efficacy of all marketed therapeutics. Influenza vaccine is said to have “an established record of safety in all age groups.” However, published data on the effects of vaccinating young children against influenza are comparatively few. Some manufacturers have even withheld data from public scrutiny amid general indifference.”

A prospective study in Thailand conducted during the country’s national COVID-19 vaccination campaign for adolescents showed what one physician described as a “stunning” association between myocarditis and the Pfizer-BioNTech vaccine.

In Pfizer’s safety data, 270 pregnancies were reported in vaccinated women during the first 12 weeks of the vaccine campaign. In 238 of them, ‘no outcome was provided. However, a further look into the document reveals what happened in the remaining 32 pregnancies:

These vaccines have proven to be unsafe and ineffective. That hasn’t stopped the FDA from approving the latest concoction without any human trials. Our regulatory bodies have been captured by the pharmaceutical industry they’re meant to regulate.

And it’s killing us.

←
Previous
CDC Changes Course on COVID Strategies
→
Next
Chronic Illness and Vaccines: Is There a Connection?