You are here: Home / Vaccine Safety / Chronic Illness and Vaccines: Is There a Connection? 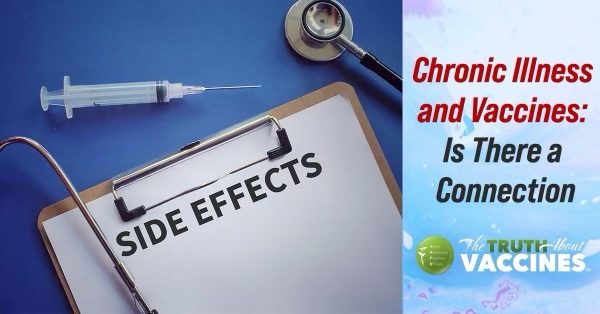 You may be surprised to learn that many of the serious injuries resulting from vaccines are listed right inside most vaccine package inserts as potential adverse events. The package insert for MMR, for example, lists panniculitis, vasculitis, pancreatitis, diabetes, thrombocytopenia, arthritis, anaphylaxis, encephalitis, serious neurological disorders, aseptic meningitis, pneumonia, Stevens-Johnson syndrome, retinitis, epididymitis, and death as possible adverse effects resulting from the vaccine.

Health authorities know full well that developing children have a higher than normal risk of becoming seriously injured or dying from approved vaccines. This is why a growing number of parents are making the decision to opt-out or minimize the number of vaccines their children receive.

Consider the following statistics and ask yourself: “Could this have anything to do with the burgeoning childhood vaccination schedule?”

What Is “Herd Immunity”?

You may wonder what’s worse: The diseases that these vaccines are designed to prevent, or the long list of potential adverse effects that they can potentially cause?

The medical establishment argues the former by stating that disease epidemics can potentially kill thousands or even millions, while only a minute fraction of vaccinated individuals are threatened by adverse effects. They also argue that vaccination rates need to be as high as possible – around 95% – in order to maintain what’s known as “herd immunity.”

The thinking behind herd immunity is that the majority of a given population, in this case children, needs to be fully vaccinated in order to prevent a disease outbreak from occurring. When the percentage of unvaccinated children gets too high, the entire “herd” is put at risk.

Herd immunity can be a real thing. But what you need to know is that it’s not in any practical way a factor of the number of pre-adolescents who are vaccinated or not vaccinated. Even if every single child in the country five years of age and under was completely vaccinated in accordance with government recommendations, it still wouldn’t be enough to procure true herd immunity, and here’s the reason why:

Herd immunity only exists when a majority of the total population possesses immunity to a given pathogen, either from previous natural exposure or from immunization. This percentage typically ranges from 75% to 94% of the total population, depending on the pathogen. But the total number of children who are even eligible for vaccination in the U.S. is nowhere close to these percentages – children under the age of 18 make up about 22% of the U.S. population – meaning that even if every single one of them was fully vaccinated, true herd immunity still would not exist.

Consequently, nobody knows the exact percentages of who has true immunity, who has artificial immunity, and who has no immunity at all – which is why the medical establishment is constantly pushing for people to get re-vaccinated with “booster” shots in order to maintain some semblance of herd immunity, which they say offers some protection rather than no protection.

It’s worth reiterating that recently vaccinated individuals are also a threat, as the attenuated and/or live viruses can spread to others in a phenomenon known as vaccine shedding – which is rarely acknowledged by public health officials.

What About the Seasonal Flu Shot?

One exception to targeted vaccines is the influenza vaccine, which changes annually in accordance with whatever flu strain happens to be circulating in a given year. But influenza strains are constantly evolving, leaving vaccine developers in a virtual guessing game. In 2009, the influenza vaccine was incorrect, leading to an increased risk of infection and death.

Even though natural exposure to influenza produces the strongest and longest lasting type of immunity, developing the flu in order to achieve this can cause a person to suffer for weeks on end prior to recovery.

Further, the natural immunity gained from wild exposure to the flu provides protection against only that particular strain, and possibly other strains that are similar to it (though not all strains).

The flu shot is customized to address whatever strain is circulating in a given year, but that assumes that health officials choose correctly, which isn’t always the case. Another problem with the flu shot is that it can cause a phenomenon known as “Hoskins Effect” that results in the body becoming less able to fight off flu strains of all types.

Because there are many varieties of influenza that easily evolve from year to year, pre-existing antibodies within the body that were produced to fight off the old strains can cross-react with the new ones being introduced, effectively switching off the immune system’s ability to keep the newest invading diseases at bay.

This may have been what caused the 2009 H1N1 flu pandemic that was characterized by extreme severity and high mortality rates in otherwise healthy adults. An epidemiological study out of Canada found that people who received the 2008 seasonal flu shot were significantly more prone to developing H1N1 the following year compared to people who did not receive the 2008 seasonal flu shot. Another study published in the journal Clinical and Vaccine Immunology in 2011 made this same correlation, and while correlation is not the same as causation, these results are still food for thought.

There’s also the very likely chance that the flu vaccine won’t even work, or that it will have inoculated against the wrong flu strain. One study found that compared with placebo or no vaccination, inactivated vaccines reduce the risk of influenza from 30% to 11% with high certainty.

Even worse is the fact that the multi-dose vials from which mass-produced influenza vaccines are made still contain the neurotoxic chemical mercury in the form of thimerosal, which is highly damaging to the immune system.

We recently published an article on this exact topic after the FDA approved a new version of the COVID shots without any human safety data. Many have compared the approval process to flu shots, which are the only other vaccines that are routinely approved without human clinical data.

Flu shots also contain a wide spectrum of other questionable ingredients, which come with their own health risks. Take a look at the ingredient list for AFLURIA, a popular flu shot that’s commonly used with pregnant women – even though its package insert clearly states that “safety and effectiveness … have not been established in pregnant women”:

The first ingredient, beta-propiolactone, is described by the NIH and the CDC as being “a reasonably anticipated human carcinogen.” The second ingredient, thimerosal, which is about 50% mercury by weight (49.55%), is a highly toxic heavy metal, neurotoxin, and possible human carcinogen that can lead to permanent brain injury.

The adult version of this same vaccine actually contains 50 micrograms (mcg) of thimerosal per dose (approximately 25 mcg of mercury), or about 50,000 parts per billion (ppb) – which is over 25,000 times the legal limit of mercury allowed in water. The U.S. Environmental Protection Agency (EPA) says that any liquid containing in excess of 200 ppb of mercury is considered to be “hazardous waste,” while drinking water cannot contain more than 2 ppb of mercury. What does this say about the safety of this particular flu vaccine?

Another flu vaccine ingredient, calcium chloride, is categorized as a “hazardous chemical” all on its own, possessing both mutagenic and tumorigenic properties as evidenced in animal studies. That’s at least three cancer-causing substances contained inside this vaccine cocktail that is injected directly into millions of people every single year.

If this isn’t concerning enough, consider what more recent science has to say about the flu vaccine. A paper published in the journal Vaccine found that pregnant women who get flu shots two years in a row have an increased risk of miscarriage. The study authors made it clear that they couldn’t establish a causal connection, but they did state that further research was warranted. This doesn’t change the fact that flu shots are routinely recommended for pregnant women, even though there has never been a single safety study conducted to show that they’re in any way safe or effective for pregnant women.

Flu shots also contain a wide spectrum of other questionable ingredients, the risks of which can far outweigh any potential benefits.

A cohort study published in JAMA Pediatrics in 2017 found that maternal influenza infection during pregnancy was not associated with increased autism risk. However, there was a suggestion that mothers who received a flu shot during their first trimester of pregnancy could have a higher risk of bearing a child who lands on the autism spectrum, though the association was not statistically significant.

Another study out of Japan that compared the flu shot to an actual placebo found that both groups experienced the same amount of flu infection – suggesting that the flu shot is medically useless. The flu shot was also found to cause additional harm, significantly in- creasing the risk of respiratory disease by 400% – which, just like in the Swedish DTP study, results from the fact that the flu vaccine weakens the immune system rather than strengthening it.

The healthcare choices you make for yourself and your family are deeply personal. Without the right information, however, it’s impossible to make a choice that is truly your own. Informed consent is at the core of autonomy. Unfortunately, the pharmaceutical industry (and the agencies meant to regulate them) are NOT giving us the full story.

Armed with the truth, you can feel empowered to make the BEST health decisions for your family.