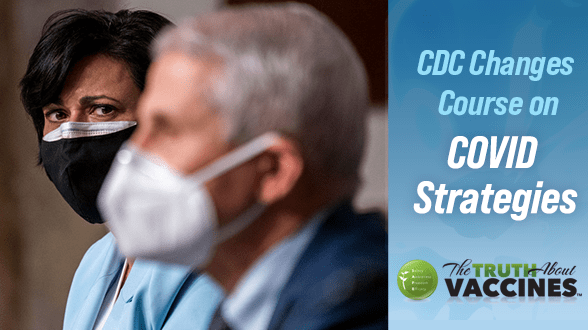 For the past 2 years, those who have elected not to receive shots for COVID-19 have been punished. Denying entry to gyms, restaurants, and theaters was touted as a way to protect the American public. When people were barred from visiting loved ones in nursing homes or fired for refusing the jab, that, too, was considered to be in the public’s best interest.

Now, the CDC is changing its tune.

We don’t like to use the phrase “I told you so” in our home. It’s gloating, annoying, and rarely necessary. But every now and again, that phrase is perfect. For example, when you’ve spent over 2 years publishing articles and research that directly contradicts the CDC (subsequently being labeled “misinformation superspreader,” “conspiracy theorist,” science denier,” and “domestic extremist”) only to watch as that same CDC begins to quietly reverse their opinions to line up with what you’ve been saying all along.

You can find all of the latest CDC guidance buried in a report from earlier this month titled: Summary of Guidance for Minimizing the Impact of COVID-19 on Individual Persons, Communities, and Health Care Systems — United States, August 2022.

The CDC team responsible for the new guidelines was careful not to admit any errors or wrongdoing, but even their carefully-chosen words seem unfathomable… if you can remember their messaging from the past 2 years.

[Note: All text in red has been retrieved directly from the CDC publication.]

“As SARS-CoV-2, the virus that causes COVID-19, continues to circulate globally, high levels of vaccine- and infection-induced immunity and the availability of effective treatments and prevention tools have substantially reduced the risk for medically significant COVID-19 illness (severe acute illness and post–COVID-19 conditions) and associated hospitalization and death.”

“All persons should seek testing for active infection when they are symptomatic or if they have a known or suspected exposure to someone with COVID-19.”

No more testing unless you have symptoms?

“CDC’s COVID-19 prevention recommendations no longer differentiate based on a person’s vaccination status because breakthrough infections occur, though they are generally mild, and persons who have had COVID-19 but are not vaccinated have some degree of protection against severe illness from their previous infection.”

Protocols are the same regardless of your “vaccination” status?

For over 2 years, Americans have been bribed, coerced, fired, and put under house arrest – all in the name of “science” and “public safety.” Now, it turns out that those of us who have been demonized for refusing to comply were right all along.

A California appeals court recently ruled that all mandates forcing churches to close are unconstitutional, while a federal judge in Ohio blocked the military’s vaccine mandate nationwide for Air Force, Space Force, and Air National Guard members who had requested religious exemptions.

Last week, a federal judge in Florida ordered class action relief and granted a classwide preliminary injunction against the federal government’s COVID shot mandate for all U.S. Marines – whether they are active or in reserve service.

CDC has also removed the recommendation that people quarantine based on contact with someone who is or might be infected. They’ve also completely abandoned the 6-foot social distancing rule (no answer yet as to who will clean up all of those silly stickers). Ashish K. Jha, the White House COVID Response Coordinator, said that social distancing is “actually not the right way to think about this.”

In one interview, he explained that close contact in poorly-ventilated indoor environments was the most likely way to spread the disease, while “outdoors, you can be outside for long periods of time without getting infected.

In April of 2020, a woman in Idaho was arrested for “trespassing” after she took her children to an outdoor playground that had been closed “to stop the spread of coronavirus.” In fact, it’s likely that many people who became infected with COVID-19 were victims of the lockdowns, with many families forced to stay in those poorly-ventilated, indoor environments for months.

The CDC has also dropped their “test-to-stay” rule for students, which had supplanted the original quarantine rule. Students have missed massive amounts of education because of these rules. Now, they’re considered obsolete.

Jeffrey Tucker’s thoughts on this bombshell align with our own:

“Remember when 40% of the members of the black community in New York City who refused the jab were not allowed into restaurants, bars, libraries, museums, or theaters? Now, no one wants to talk about that.

Also, universities, colleges, the military and so on — which still have mandates in place — do you hear this? Everything you have done to hate on people, dehumanize people, segregate people, humiliate others as unclean, fire people and destroy lives, now stands in disrepute.”

We were also told that people who were vaccinated would be protected from infection and could not spread the disease to others. As restaurants, gyms, and entertainment venues began to reopen, many required proof of a COVID shot for admittance. Others allowed the unvaccinated to attend, but only if they could prove that they had recently tested negatively.

Millions of people who had received the jab flooded into packed bars, clubs, restaurants, and music venues, convinced of their immunity and proudly displaying their vaccine cards to anyone who asked to see them. Now CDC recommendations are the same for the jabbed and the unjabbed.

As recently as this past May, Rhode Island state Senator Samuel W. Bell proposed Senate Bill 2552, which would have fined the unvaccinated $50 each month and forced them to pay twice as much state income tax as their vaccinated counterparts. (Fortunately, that bill never passed.)

In April, a paper by the National Bureau of Economic Research (NBER) analyzed a myriad of data from all 50 states and the District of Columbia to determine empirically whether things like shutting down schools and businesses and forcing people to wear masks all day were effective.

The results stand in stark contrast to the messaging pushed by politicians, the mainstream media, and medical “experts” like Tony Fauci. As you can see in the table below, states who were condemned for ending lockdowns quickly or eliminating mask mandates fared far better than states like California and New York, whose residents are still dealing with government restrictions. 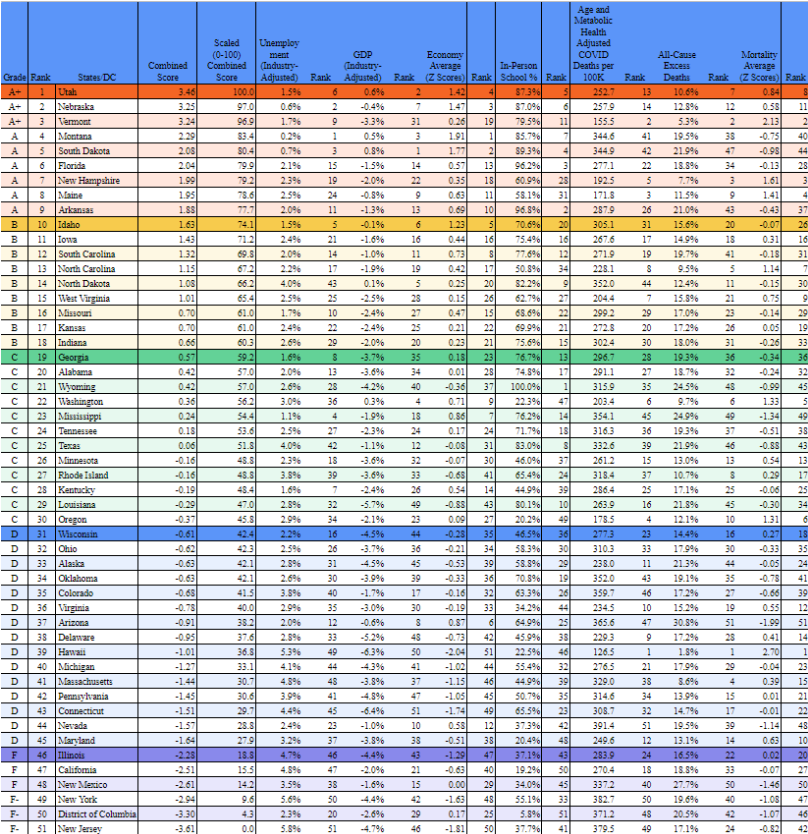 This new research shows what many doctors and researchers have been attacked for saying since the beginning: mask mandates and lockdowns simply don’t work. The government recently voted to extend mask requirements on airplanes while Philadelphia recently announced that it will be reinstituting mask requirements for indoor spaces.

Nevertheless, groups like the CDC are still holding on to a few of their mistakes – especially masks. The Biden administration is still fighting a legal battle to overturn a court decision that the mask mandate for public transit was illegal from the start. Without any kind of exit strategy, masks seem to be a ship with which the CDC, Fauci, and many of our elected officials will have to go down.

“At the high COVID-19 Community Level, additional recommendations focus on all persons wearing masks indoors in public and further increasing protection to populations at high risk.”

Principal for @mvwschools called police on a four-year old for not wearing a mask.

The officer was cordial and understanding, but the child could not stay. The child has missed school most of this week.

There is no state or county school mask mandate where this school resides. pic.twitter.com/etfXFR11sJ

We believe in the principles of human rights and freedom of choice when it comes to any medical intervention, regardless of their risks or benefits. We are being conditioned to live in fear, accept whatever the “authorities” tell us, and to never question orders. We’ve been lied to. We’ve given away our rights while causing a pandemic of fear, isolation, addiction, abuse, suicide, and crime. We’ve shattered global economies and created a government that is more centralized and powerful than ever before.

We spent over 2 years living in a United States that required us to comply first and ask questions later. The loss of life resulting from the response to the virus (rather than the virus itself) has been staggering. We may not fully understand the cost of these actions for a generation.

A “heavily footnoted and opaquely written reversal, published by the main bureaucracy responsible for the disaster” is signaling a shift back towards “normal.” But we are not out of the woods yet. And what about the next crisis? How long before governments and health agencies return their boots to our necks?

The latest publication by the CDC confirms that we have been right all along. That no one was ever “following the science” and that all of this has been a misguided farce. It’s also proven how easily the majority of Americans will lay down when faced with authoritarian oppression and tyranny.

In March of 2019 – long before anyone had heard of COVID-19 – we published an article warning that government tyranny was imminent. We warned that our medical freedoms were being eroded. We highlighted the role of the pharmaceutical industry and how corrupt government officials were using “media and subsequent laws to intimidate and demonize the opposition, creating societal bullying that completely inhibits rational and respectful debate among citizens.”

We talked about the government propaganda machine, how social and mainstream media outlets would be weaponized to silence dissenting opinions. We warned that all of this was going to happen. Here’s a direct quote from that article, published on March 26, 2019:

There is an active propaganda machine working as a precursor to compulsory vaccination mandates around the world. Fear is already being manufactured, opposition is already being silenced, and ordinary people are already so polarized that civil discussion is hard to come by.”