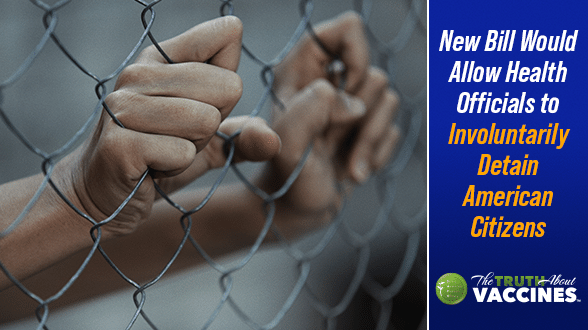 Lawmakers in Washington State have proposed a new and invasive policy that would affect hundreds of thousands of Washingtonians. WAC 246-100-040, a proposed revision to include Covid protocol under the state’s Communicable and Certain Other Diseases act, outlines “Procedures for isolation or quarantine.”

The measure would allow local health officers “at his or her sole discretion” to “issue an emergency detention order causing a person or group of persons to be immediately detained for purposes of isolation or quarantine.”

Health officers are required to provide documentation proving unvaccinated residents subject to detention have denied “requests for medical examination, testing, treatment, counseling, vaccination, decontamination of persons or animals, isolation, quarantine and inspection and closure of facilities” prior to involuntarily confinement in quarantine facilities, the resolution states.

The amended law would also allow health officers to deploy law enforcement officials to assist with the arrest of uncompliant Washington residents.

According to W 246-100-040,  “a local health officer may invoke the powers of police officers, sheriffs, constables, and all other officers and employees of any political subdivisions within the jurisdiction of the health department to enforce immediately orders given to effectuate the purposes of this section in accordance with the provisions of RCW 43.20.050(4) and 70.05.120.”

The “emergency detention order” would allow individuals to be detained “for a period not to exceed ten days.”

This alarming measure comes in tandem with Gov. Jay Inslee’s (D) effort to hire “strike teams” to run quarantine camps, outlined in the state’s governmentjobs.com website, a term that has since been scrubbed from the website sometime after the bulletin was posted in September 2021.

Now the state website says, “Isolation and Quarantine Camp Consultant” duties include “Maintaining the readiness of the facility and equipment which includes ensuring contractors have cleaned the facility adequately.”

The so-called “Isolation & quarantine team consultants” will earn $3,294 to $4,286 monthly for their services, according to the website.

Inslee further warned unvaccinated residents on Wednesday that he will soon impose even more harsh COVID restrictions to address the 146% spike in COVID cases despite 68% of Washington’s residents being “fully vaccinated.”

This comes as New York attempts to pass a similar bill allowing Gov. Kathy Hochul (D) to forcibly detain anyone she deems a public health threat.

The bill, called A.416, would “allow the governor or the appropriate health official to order the removal and detention of any person afflicted with a communicable disease in the event that there is a state of health emergency declared by the governor in relation to such disease.”

“[A]ny person or group removed or detained by order of the governor or his or her delegate shall be detained for as long as the department may direct,” the proposed bill states.

Hayley Hodgson, 26, moved to Darwin from Melbourne to escape the never-ending lockdowns — only to find herself locked up in a Covid Internment Camp without even having the virus.

“You feel like you’re in prison. You feel like you’ve done something wrong, it’s inhumane what they’re doing. You are so small, they just overpower you. And you’re literally nothing. It’s like ‘you do what we say, or you’re in trouble, we’ll lock you up for longer’. Yeah, they were even threatening me that if I was to do this again, ‘we will extend your time in here,’” she said.

“You literally get put on the back of a golf buggy with your bags. And these people are in hazmat suits and everything. They don’t want to come near you because they think you’re infectious. And they literally drop you to your room. And they leave you. They don’t come and say anything, they don’t check up, they don’t do anything. You get delivered your meals once a day. And you are just left.”

Hodgson goes on to describe her experience, including videos of Darwin police officers threatening her with a $5,000 fine if she steps off her 6’X3’ patio without a mask. Claims that the camps are only for residents returning from abroad are a lie; Hodgson was simply identified as a “close contact” of someone who tested positive. Within hours, she was put on a bus and taken to the camp.

Earlier this month, three teenagers (aged 15, 16, and 17) escaped from the facility by scaling the fences bordering the compound. The escape came days after a 27-year-old man – who had tested negative for COVID – also escaped.

All four of the escapees were quickly captured by the police and taken into custody. All three of the most recent escapees tested negative for COVID-19. But that doesn’t seem to matter to Australian authorities, who have forced hundreds to spend an involuntary 14-day quarantine in the COVID camps.

Prisoners are restricted to a small room and a deck measuring approximately 6’X3”. Lines are painted throughout the facility and crossing the literal line can result in thousands of dollars in fines. The camp is surrounded by chain-link fencing and monitored by police officers and camera surveillance. Even each cluster of buildings is separated from the others by fencing.

This is the reality we could soon face in the United States if we continue to allow our elected officials to go unchecked. The accumulation of power by government officials has been staggering since COVID first came to our shores, and it shows no signs of stopping.

But there is strength in numbers. Media censorship and the relentless bludgeoning by Legacy Media outlets make it seem like we are in the minority. We are not.

It is essential that you make your voice heard… and that you do it loudly and often. NO to vaccine mandates. NO to increased government powers. NO to lockdowns and travel restrictions.

We are on the precipice of an America in which you can be forcibly detained for refusing to comply with oppressive, totalitarian edicts. For the sake of our children, we need to stand up and stop it from happening. DO NOT COMPLY.