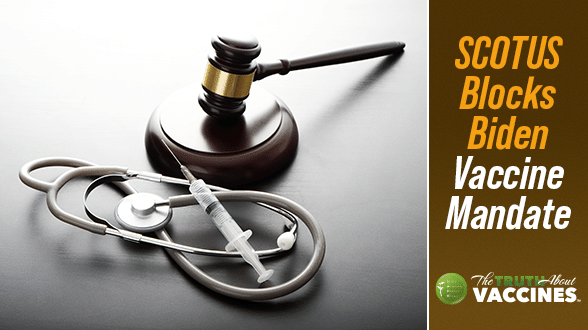 The ruling impacts 10.4 million workers at 76,000 health care facilities as well as home health care providers. The rule for healthcare workers does include medical and religious exemptions.

According to a majority of the Supreme Court, Mr Biden had the law on his side when ordering healthcare workers to get vaccinated but using a 51-year-old workplace safety statute to implement a vaccine-or-test requirement on all large employers was a bridge too far.

President Biden, whose approval rating has been sagging, expressed disappointment with the decision “to block common-sense life-saving requirements for employees”.

“I call on business leaders to immediately join those who have already stepped up – including one third of Fortune 100 companies – and institute vaccination requirements to protect their workers, customers, and communities,”he said.

But traditionally liberal companies like Starbucks have already begun to nix their vaccine requirements in the wake of the court’s ruling. “We respect the court’s ruling and will comply,” Starbucks Chief Operating Officer John Culver wrote in a memo.

In an unsigned opinion, the court wrote: “The challenges posed by a global pandemic do not allow a federal agency to exercise power that Congress has not conferred upon it. At the same time, such unprecedented circumstances provide no grounds for limiting the exercise of authorities the agency has long been recognized to have.” It said the “latter principle governs” in the healthcare arena.

In freezing a lower court opinion that allowed the regulation to go into effect nationwide, the majority sent a clear message that the Occupational Safety and Health Administration, charged with protecting workplace safety, overstepped its authority.

The Supreme Court’s ruling is a major win, preventing the Biden administration from using Federal agencies and obscure emergency regulations to force their agenda. But their decision to uphold mandates for healthcare workers is a betrayal of the very freedoms upon which this nation was founded.

“Although Congress has indisputably given OSHA the power to regulate occupational dangers, it has not given that agency the power to regulate public health more broadly,” the majority said in an unsigned opinion. “Requiring the vaccination of 84 million Americans, selected simply because they work for employers with more than 100 employees, certainly falls in the latter category.”

The regulation struck down by the court would have applied to some 84 million private sector employees and would have required all businesses with 100 or more workers to either be vaccinated, with the federal government footing the bill, or be tested weekly.

Pfizer shares have dropped about 7% since the ruling was announced.

The 5-4 majority that supported imposing the mandate for healthcare workers said, “We agree with the Government that the [Health and Human Services] Secretary’s rule falls within the authorities that Congress has conferred upon him,” said the majority, writing that the rule “fits neatly within the language of the statute.”

“I do not think that the Federal Government is likely to be able to show that Congress has authorized the unprecedented step of compelling over 10,000,000 healthcare workers to be vaccinated on pain of being fired,” Alito wrote in his dissent.

Former President Donald Trump cheered the court’s decision and said vaccine mandates “would have further destroyed the economy”. “We are proud of the Supreme Court for not backing down,” he said in a statement. “No mandates!”

The ruling is a big win for health freedom, protecting your right to make personal decisions about your healthcare without the threat of losing your job. But the court fell far short in its decision to uphold the mandate for healthcare workers.

Many of the larger hospital groups, including the Cleveland Clinic and HCA Healthcare, suspended their own vaccination mandates last month while they awaited the Supreme Court’s decision. And some are still assessing the conflict with murky anti-vaccine requirements imposed in Florida, Texas and some other states.

Jennifer Bridges, one of the nurses who was fired in late June from Houston Methodist Hospital for not getting the vaccine and now works for a private clinic in that city, said she doesn’t regret her decision. Ms. Bridges said she still considers the vaccine experimental.

“I think your own medical bodily autonomy is very important,” she said. “I don’t think anyone should force you to do something against your will.”