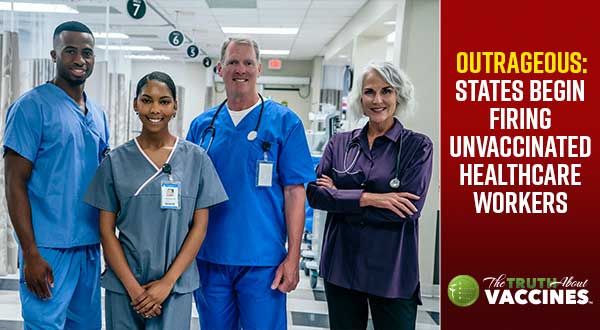 Several states began firing unvaccinated healthcare workers last week, prompting outrage among frontline heroes. In states like New York, many workers were fired without notice. One physician’s assistant said she was no longer on the schedule for next week and her email seemed to have been shut off.

A North Carolina-based hospital system announced Monday that roughly 175 unvaccinated employees were fired for failing to comply with the organization’s mandatory coronavirus vaccination policy, the latest in a series of health-care dismissals over the covid jab.

Novant Health said last week that 375 unvaccinated workers — across 15 hospitals and 800 clinics — had been suspended for not getting immunized. Unvaccinated employees were given five days to comply.

The mass termination of unvaccinated hospital system employees is among the largest of its kind to date. More than 150 health-care workers who did not comply with a vaccine mandate at Houston Methodist — one of the first health systems to require the coronavirus shots — were fired or resigned in June after a federal judge upheld the policy. ChristianaCare, a Delaware health system, announced this week that 150 employees were fired for not adhering to its vaccine mandate.

While most states have resisted implementing mandates, health-care workers in Rhode Island, Oregon, Maine, New York, and Washington, D.C. are now required to be vaccinated. But these tyrannical mandates have not gone unchallenged.

New York’s health-care mandate is facing at least eight lawsuits. Last week a federal judge in Utica issued a temporary restraining order that allowed healthcare workers with religious exemptions to continue working until at least October 12. Jillian Dobrzenski, a 34-year-old nurse at Catholic Health, is among those who have a religious exemption, but said that her choice to remain unvaccinated was based on a range of factors, including that she had COVID last December. If the religious exemption isn’t extended beyond October 12, Catholic Health said unvaccinated employees will be placed on unpaid leave for 30 days, after which their employment will be terminated.

“I’m not ready to not be a nurse anymore and this would basically eliminate me from being a nurse in the entire state,” Dobrzenski said. “We would probably be okay on savings for at least a handful of months. After that, I already have an RN license to work in the state of Florida and it looks more and more each day like we’ll probably end up selling our house and moving.”

“We went from heroes to zeroes because we won’t comply,” Benjamin said, not only of herself, but other health care workers who are choosing not to get vaccinated.

Registered Nurse Desiree Desvergnes works with Benjamin at Women & Infants Hospital in Providence. She also refuses to get immunized.

“I worked through this pandemic keeping myself, my family and my patients safe,” Desvergnes said. “I was blessed with my immune system … and I do not want to alter that at all. If I made it through this far, I will continue to take that risk.”

Benjamin and Desvergnes tell 12 News they both wear face masks while on the job and get tested for the virus twice weekly, which they believe should be sufficient.

Both are seeking religious exemptions to the mandate, along with their colleagues, mammographer Monica Brown and Registered Nurse Anne Rich.

“It goes against all of my religious beliefs to the core of my existence,” Brown explained.

The request was ultimately shot down by a judge Thursday.

“I have not infected one patient that I know of,” Rich said, adding that she has already contracted and recovered from COVID-19. “Who knows what [the vaccine] is going to do [to our bodies] years from now. I have my own God-given antibodies against this virus.”

Woman & Infants Hospital is owned by Care New England. President and CEO Dr. James Fanale warned employees Wednesday that those who refuse to get vaccinated “will not be allowed to work.”

“Our healthcare system has contingency plans in place should any healthcare worker choose not to work after the deadline,” Fanale said, adding that 95% of Care New England’s workforce is immunized.

In some states, those contingency plans could involve calling in the National Guard.

Governor Kathy Hochul is considering employing the National Guard and out-of-state medical workers to fill hospital staffing shortages with tens of thousands of workers possibly losing their jobs for not meeting a Monday deadline for mandated COVID-19 vaccination.

The plan, outlined in a statement from Hochul on Saturday, would allow her to declare a state of emergency to increase the supply of healthcare workers to include licensed professionals from other states and countries as well as retired nurses.

Hochul said the state was also looking at using National Guard officers with medical training to keep hospitals and other medical facilities adequately staffed. Some 16% of the state’s 450,000 hospital staff, or roughly 72,000 workers, have not been fully vaccinated, the governor’s office said.

Ironically, National Guard troops have until June 30th, 2022 to get the jab, which means healthcare workers fired for refusing an experimental shot could be replaced by soldiers who are not held to the same standard.

We would never force a vaccine – or any procedure – on a patient if they said no. We are saying no, and they are going to make us lose our jobs.”

←
Previous
Tennis Pro Says ‘Season Is Over’ After COVID Vaccine Injury; NBA Players Stand Firm Against Getting Vaccine
→
Next
Forced Vaccination Was Always the End Game