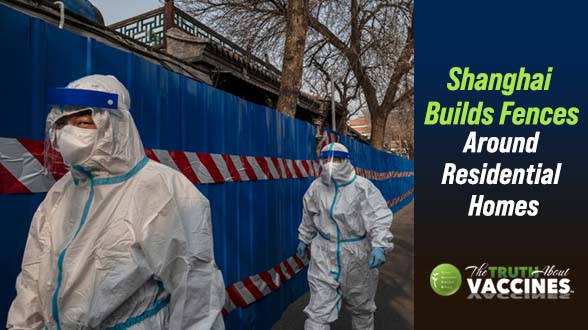 Editor’s Note: This article was originally published in April 2022. It has been updated with new information in October 2022.

Authorities in Shanghai have installed metal barriers and high fences around people’s homes to stop residents from leaving their homes in a ruthless new attempt to stop COVID. The move has sparked fresh public outcry over a lockdown that has forced much of the city’s 25 million people indoors.

“This is so disrespectful of the rights of the people inside, using metal barriers to enclose them like domestic animals,” said one user on social media platform Weibo.

One video showed residents shouting from balconies at workers trying to set up fencing before relenting and taking it away. Other videos showed people trying to pull fences down.

Many of the metropolis’s 25 million residents have been shut in as China doubles down on its “zero COVID” policy. Reuters reported seeing the fences on the streets in Shanghai on Sunday and said the barriers are being placed in the city’s “sealed areas” — a designation for buildings where one or more people have tested positive and where neighbors are barred from leaving their front door.

Those who test positive have been sent to inhumane “quarantine centers,” where children as young as 3 months old were being separated from their parents in the name of the “greater good.”

It was not clear what prompted authorities to resort to fencing. A notice dated Saturday from one local authority shared online said it was imposing “hard quarantine” in some areas.  Police in hazmat suits have been patrolling Shanghai streets, setting up roadblocks and asking pedestrians to return home.

The lockdown, which for many residents has lasted over three weeks, has fuelled frustration over access to food and medical care, lost wages, family separation, and quarantine conditions.

In the past week, authorities have also transferred entire communities, including uninfected people, saying they need to disinfect their homes, according to residents and social media posts.

Many residents have turned to the internet to vent about the lockdown and express dissent, using euphemisms and other means to battle government censors who often remove content critical of the authorities.

Videos of “Do You Hear the People Sing?”, a protest anthem from “Les Miserables”, have been widely reposted, with the title of the French musical receiving over 90 million mentions on WeChat on Saturday, the chat app’s data showed.

“They might as well just burn us all inside our homes,” a user commented on Weibo, referring to how the structures are fire hazards.

As a communist nation, China has easily instituted the use of government health tracking apps, lockdowns, and social surveillance. Media censorship has created a challenge to those who want to voice their frustrations, and the fallout has resulted in massive shortages.

A total of 62 temporary quarantine sites have been designated in hotels, stadiums and exhibition centers, said Gu.

But the conditions in these quarantine centers are atrocious. In a video that has gone viral on social media, chaotic scenes can be seen at the Nanhui quarantine site in the Chinese city of Shanghai. People can be seen complaining about the insufficient staff and shortage of food at the isolation site amid a lockdown in the city.

They are fighting over limited resources such as water, food, and blankets which are considered basic necessities.

The video has been shared thousands of times on Chinese social media platforms such as Weibo and WeChat.

In October, are still deploying lockdowns and quarantines with ruthless efficiency. Cases in mainland China hit 2,898 on Sunday, topping 2,000 for a second straight day and pressuring the country’s controversial zero-COVID policy, which has hamstrung the economy and exasperated its citizens. In provinces with increased case rates, some government officials are being punished for lax enforcement of COVID rules. But here’s the thing:

There are over 1.4 BILLION people living in China. Which means that all of this devastation (socially, economically, educationally) is happening because of a 0.000205% positive case rate. Crazy, right?

If you think this can’t happen in America, think again. After a federal Judge struck down mask mandates for airplanes, trains, and cabs, the CDC asked the Department of Justice to appeal the decision.

Their complaint is not that the masks are still needed (the mandate was set to expire on May 3rd) but that the CDC is worried that the ruling will strip their power to exercise similar authority in the future.

There are several things we can do to prevent what’s happening in Shanghai from happening here, but the simplest and most effective is this: DO NOT COMPLY!