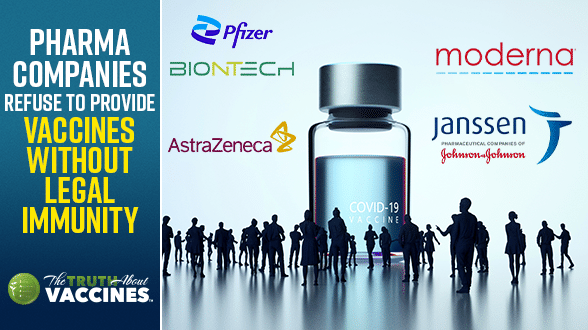 The push to administer as many COVID shots as possible has reached a fevered pitch. Several states require proof of vaccination in order to participate in society. Some nations have imposed “lockdowns of the unvaccinated” while others plan to force the jab on all citizens early next year.

Joe Biden’s vaccine mandate for private sector workers has made its way to the supreme court after lower courts kept flipping back and forth on the constitutionality of the order. Australia is detaining hundreds of its citizens in detention centers – even if they have never tested positive for COVID.

It may come as a surprise, then, that tens of millions of people are not being granted access to the shots. According to internal documents from Gavi (a charity focused on providing vaccines to refugees and those in poor nations), major vaccine manufacturers are refusing to provide doses for fear of legal risks of harmful side effects.

Essentially, these pharmaceutical companies will not provide any shots without full legal immunity from lawsuits arising from vaccine injury or death.

We’ve written extensively about how the safety testing for vaccines is exceptionally insufficient, and significantly less structured than the rest of the pharmaceutical industry. What may shock you even more is that vaccine manufacturers can’t be sued when their products cause injury or death.

You see, vaccines have been praised as the greatest medical breakthrough in human history, responsible for eradicating lethal diseases of epidemic proportions. Lobbyists have pressured the government, claiming that to not make vaccines available is unethical. That’s why there are no studies comparing vaccinated and unvaccinated populations. But it gets worse.

In 1986, the pharmaceutical industry went to President Ronald Reagan’s cabinet and essentially blackmailed them. They claimed that lawsuits against them were inhibiting their ability to develop and administer their vaccines, and that they needed to be protected from liability in order to continue to make these “life-saving” drugs.

Allow me to introduce you to vaccine court…

If you or your family members are injured or killed by a vaccine, you are not allowed to sue the manufacturer. Instead, you need to go through something called the Vaccine Injury Compensation Program. This is a no-fault system in which plaintiffs fight against the Department of Health and Human Services (HHS), which is defended by lawyers from the U.S. Department of Justice (DOJ).

You’re essentially suing your own government over the negligence of private drug companies. Burden of proof is on the plaintiff, but there is no discovery allowed. Combined with the severe lack of research, it’s extremely difficult to prove that vaccines are at fault.

And here’s the kicker:

As long as vaccine manufacturers don’t know that their products are harmful, they are relieved of any liability. With a built-in market of 80 million American children each year, there is no incentive for these companies to conduct thorough safety studies. If they don’t find anything to report, they’re released from any liability for their product.

With governments and media outlets around the world stoking fear about COVID, these manufacturers have lowered the safety standards even further as illegal mandates and executive decrees have created a new market of over 4 BILLION people.

Factor in the second dose, tack on a few boosters, and we’re easily looking at over 8 BILLION doses sold in just the first year. Companies like Pfizer, Moderna, and AstraZeneca are more than willing to force shot after shot after shot on men, women, and children around the world…

…as long as they can’t be sued when their products cause injury or death.

Reuters summed up the issue:

Gavi, which operates COVAX with the World Health Organization, says that where those applying for doses can’t bear legal risks, deliveries from that stockpile can only be made if vaccine-makers accept liability.

The companies that are willing to do so under these circumstances provide only a minority of the programme’s vaccines, according to people familiar with the matter and the documents, written by Gavi staff for a board meeting starting at the end of November.

Unless all the firms accept legal liability, “access to vaccines for some populations will remain a challenge,” the Gavi documents say, adding that new crises will generate additional demand to cover displaced populations.

These companies only care about the money. They’ll sell their experimental, unsafe, unproven cocktails to anyone and everyone… as long as they aren’t responsible for the damage.