You are here: Home / News / “Alexa, Access my Medical Records” 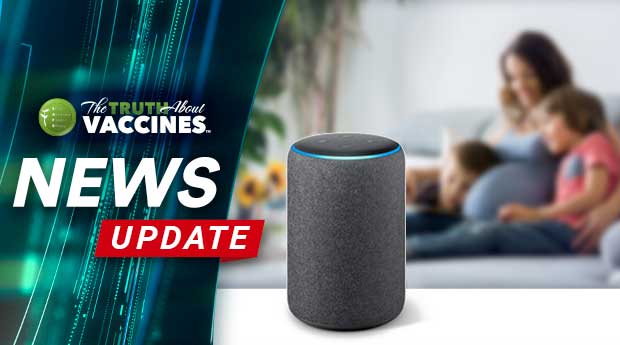 According to Amazon, the voice-command response system built into the Amazon Echo (“Alexa”) is now HIPAA compliant, opening the door for the voice assistant to track and monitor your sensitive health information.

Hmmmmm… this kind of reminds me of when Monsanto declared that their GMO crops were “safe” based upon the findings of their own scientists testing their own crops at their own facilities.

Alexa has become wildly popular since its introduction in 2014, selling over 100 million devices in the past 5 years, and is the world’s most popular voice assistant.

Yes, there are some great “perks” to using Alexa: you can play music, check the weather, order food, set timers and alarms, and even control the lighting and temperature in your home with a simple voice command.

Now that Alexa is compliant with the U.S. Health Insurance Portability and Accountability Act of 1996 (HIPAA), Amazon is able to break into the healthcare sector.

They have initially announced partnerships with six major companies:

This is great news for Amazon, as the healthcare industry is worth a whopping $3.5 trillion. By the time the markets opened on the Monday following the announcement, Amazon had gained over $15 billion in market capitalization. Cha-Ching! But the company says the move will benefit patients as well.

Last month, Amazon announced that it would be working with major healthcare companies to develop apps that can manage patient data, check blood sugar, or find a doctor. Here’s what this could mean for you.

The new compliance will allow for the introduction of many new features that could be incredibly useful to patients (and Big Pharma), like reminding them to take or refill prescriptions, helping them to find a doctor and schedule an appointment, or even update doctors on their recovery following a procedure. The voice assistant could be especially beneficial to groups like seniors or people with mobility problems, who can now simply ask Alexa to refill a prescription, schedule an appointment, or give them insights on their latest blood sugar reading.

And while these all sound like really convenient new changes to the way we approach healthcare, there are more than a few concerns in my mind.

Alexa, Are You Listening?

The first and most obvious concern is that of privacy. Alexa is ALWAYS listening. And while “she” may not respond to everything you say, reports have confirmed that she hears everything.

And she may be recording it…

According to an April report by Bloomberg, thousands of Amazon workers have been hired to listen to private Alexa conversations in order to “improve the Alexa digital assistant powering its line of Echo speakers.” The report was released after several employees tasked with reviewing the recordings came forward despite signing nondisclosure agreements with Amazon.

An Amazon spokesman said the following in a digital statement:

We take the security and privacy of our customers’ personal information seriously. We only annotate an extremely small sample of Alexa voice recordings in order to improve the customer experience. For example, this information helps us train our speech recognition and natural language understanding systems, so Alexa can better understand your requests, and ensure the service works well for everyone.

We have strict technical and operational safeguards and have a zero-tolerance policy for the abuse of our system. Employees do not have direct access to information that can identify the person or account as part of this workflow. All information is treated with high confidentiality and we use multi-factor authentication to restrict access, service encryption and audits of our control environment to protect it.”

But the Bloomberg report found that, while reviewers may not have access to a user’s full name and address, information like the account number and device’s serial number are available. Workers have described hearing what were clearly meant to be private conversations and have internal chatrooms that they can use to share recordings.

Allowing Alexa access to your medical information may seem like a breakthrough in the way we approach healthcare, but it could also mean that your information is no longer private.

According to the Alexa Privacy Settings Page in the Alexa App: “Training Alexa with recordings from a diverse range of customers helps ensure Alexa works well for everyone. When this setting is enabled, your voice recordings may be used in the development of new features. If you turn this setting off, new features may not work well for you.”

Below are step-by-step instructions for disabling tracking and recording for Alexa:

Alexa, What Drugs Should I Buy?

Another major concern is the inherent conflict of interest that arises when a retail giant is allowed to access so much personal health information. Amazon is built to sell, and users who have Alexa spend on average about 10% more than they did before installing the voice assistant. What does this mean for healthcare applications?

It could mean that Amazon will be able to specifically target you for pharmaceutical advertising, or even sell your personal information to manufacturers looking for a marketing advantage. And that would be a problem for several reasons.

First, it’s an invasion of our privacy. HIPAA was put in place to protect patient privacy as access to records became faster and easier with new technology. But Amazon has already shown that their idea of privacy is shaky at best and sinister at worst. (You can read more about it here) Allowing these little microphones to record our medical information is a slippery slope that will likely result in a complete breakdown of patient privacy.

Second, it leaves too much room for Big Pharma to gain more influence over our healthcare decisions. If Alexa knows that you’re dealing with chronic pain, are they more likely to point you towards core-strengthening exercises and acupuncture, or are they going to immediately ask if you’d like to request a prescription for OxyContin?

Amazon is arguably the best at targeted marketing, and we’d be foolish to think that major drug manufacturers won’t use their influence to exploit Amazon’s new data to push patients and doctors alike towards their products. One minute you’re asking Alexa about your blood sugar, and the next you’re seeing adds for Metformin.

Alexa, Should I Get Vaccinated?

Finally, it could quickly become a dangerous new tool for the Medical Mafia. We wrote recently about the measles issue in New York, where authorities were using electronic medical records to track down anyone who had not received the measles vaccine and compel them to do so. Did HIPAA protect those families? As it turns out, it didn’t. According to the Department of Health and Human Services (HHS):

What this essentially means is that HIPAA law doesn’t protect you if a governing body decides that your health records are necessary for the public good. And that’s exactly what we saw in New York: government agents used private medical records to hunt down families who hadn’t received vaccinations and threaten them with fines and jail time until they complied.

The problem is that HHS, the FDA, and the CDC are all bought and paid for by the very companies that they’re meant to regulate. With Alexa accessing your private health information, the door would be opened for pharmaceutical companies to interfere even further. And this time, they’d be working with the greatest sales platform the world has ever seen.

As we’ve seen over and over, with every “advancement” in technology comes further erosion of privacy. Even if companies like Amazon pledge to protect our privacy, they could always change their minds, which is what Facebook retroactively did in 2010. The social media giant made the pages that we “liked” public, even though it had previously told users that such information would only be shared with friends.

Listen, I don’t want to sound like Chicken Little, running through the streets crying “the sky is falling.” There are a lot of unique and helpful things that could come as a result of Alexa’s new HIPAA status. It could make access to medical advice cheaper and more efficient. It could help older patients track important medication or diabetics keep tabs on their blood sugar. It could make follow-up care after surgery easier.

But it could also open the door for corruption. Corruption by Big Pharma and corruption from government agencies with a mandatory vaccination agenda. The scary thing isn’t just that Amazon is listening in on our homes. It’s that it is gathering so much data about us that it is increasingly able to get into our minds!

Alexa is the epitome of “Big Brother” privacy invasion! It’s an Orwellian “snitch device” that can be used to control the population of the world. What promises to give you more “free time” and “convenience” today could enslave you tomorrow.

Before you speak that next word or give that next command, just remember one thing: Alexa is recording you, listening to you, learning you, and could ultimately be used to control you.