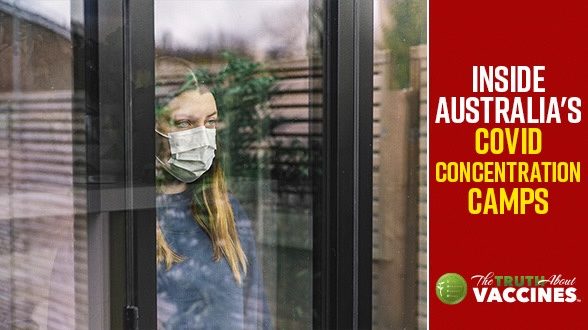 When it comes to the Australian COVID detention centers, mainstream media is working hard to discredit comparisons to Nazi Germany. A quick Google search of the Australian COVID camps will return results ranging from “fact-checks” to pictures of bikini-clad women basking in the sun.

But the truth of these camps is far more sinister, as many of its visitors (read: prisoners) will tell you. There has been harsh criticism of those comparing these detention centers to the Jewish ghettos established under the Nazi regime.

But these comparisons are not unwarranted.

“Imagine that phrase: a woman in a camp in Australia is being detained. That, in itself, tells you where you are,” says investigative journalist Lee Smith, commenting on the alleged detention of a woman in Darwin, Australia in a so-called quarantine facility, without a positive COVID-19 result.

Hayley Hodgson, 26, moved to Darwin from Melbourne to escape the never-ending lockdowns — only to find herself locked up in a Covid Internment Camp without even having the virus.

“You feel like you’re in prison. You feel like you’ve done something wrong, it’s inhumane what they’re doing. You are so small, they just overpower you. And you’re literally nothing. It’s like ‘you do what we say, or you’re in trouble, we’ll lock you up for longer’. Yeah, they were even threatening me that if I was to do this again, ‘we will extend your time in here,'” she said.

“You literally get put on the back of a golf buggy with your bags. And these people are in hazmat suits and everything. They don’t want to come near you because they think you’re infectious. And they literally drop you to your room. And they leave you. They don’t come and say anything, they don’t check up, they don’t do anything. You get delivered your meals once a day. And you are just left.”

Hodgson goes on to describe her experience, including videos of Darwin police officers threatening her with a $5,000 fine if she steps off her 6’X3’ patio without a mask. Claims that the camps are only for residents returning from abroad are a lie; Hodgson was simply identified as a “close contact” of someone who tested positive. Within hours, she was put on a bus and taken to the camp.

Earlier this month, three teenagers (aged 15, 16, and 17) escaped from the facility by scaling the fences bordering the compound. The escape came days after a 27-year-old man – who had tested negative for COVID – also escaped.

All four of the escapees were quickly captured by the police and taken into custody. All three of the most recent escapees tested negative for COVID-19. But that doesn’t seem to matter to Australian authorities, who have forced hundreds to spend an involuntary 14-day quarantine in the COVID camps.

Prisoners are restricted to a small room and a deck measuring approximately 6’X3”. Lines are painted throughout the facility and crossing the literal line can result in thousands of dollars in fines. The camp is surrounded by chain-link fencing and monitored by police officers and camera surveillance. Even each cluster of buildings is separated from the others by fencing.

The harshness of the country’s importation policies is in keeping with the other authoritarian laws and regulations that often surprise foreigners familiar with Australia’s reputation for carefree “throw another shrimp on the barbie” gaiety.

Watch Hayley’s interview with UnHerd’s Freddie Sayers, where she describes the circumstances of her detention and the cruel treatment she received during her 14-day detention at the COVID camp, despite never once testing positive for the virus.

Australia will not be the last nation to use Nazi tactics to isolate and detain the unvaccinated and infected. We’ve already seen draconian lockdowns in countries like Germany and Austria that are exclusive to the unvaccinated.

Many nations are planning to require vaccination for all citizens early next year.

The looming question that should be in everyone’s minds is: Or what?

What will they do to those who refuse to comply with vaccine mandates? Crippling fines? Segregation? Arrest?

Sadly, Hayley Hodgson lost her job while detained at the Howard Springs internment camp. Governments around the world have fostered fear from the beginning of the pandemic in order to expand their control. Efforts to treat patients at home to avoid hospitalization are virtually nonexistent. Promising and widely available treatments and prophylactic measures have been restricted or banned.

Yes, this is about forced vaccination. But it won’t stop there. Governments, unchecked, will continue to amass and abuse their power. The only way to stop them is to challenge them. In a free society, the government derives its power from the will of the governed.

It’s time to disobey. It’s time to make our voices heard. It’s time to let our government – and governments around the world – know that we will not go quietly. We will not go peacefully into a “new normal” that strips us of our freedoms, forces dangerous, untested drugs into our children’s veins, and turns free thinkers into second class citizens.

The time is RIGHT NOW to take a stand for freedom… so that our children won’t have to.