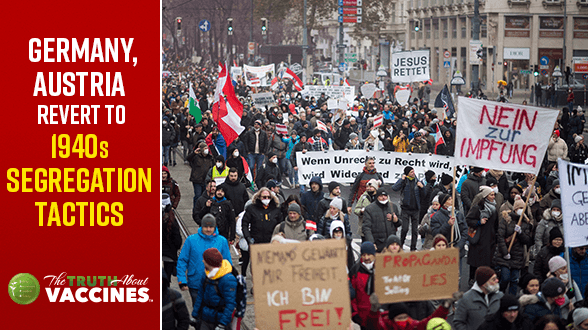 Comparisons of COVID restrictions to Nazi Germany have not been exaggerated, as nations impose harsh restrictions on the unvaccinated and move closer to national mandates. In Germany, unvaccinated people will be banned from accessing all but the most essential businesses, such as supermarkets and pharmacies, outgoing Chancellor Angela Merkel and her successor, Olaf Scholz, announced Thursday, following crisis talks with regional leaders.

Incoming Chancellor Scholz did not mince words, describing the new restrictions as “a lockdown of the unvaccinated.” Meeting with Scholz and Germany’s 16 state leaders for emergency talks on Thursday on tougher measures to stem rocketing Covid cases, the outgoing chancellor said an “act of national solidarity” was required.

“We have understood that the situation is very serious and that we want to take further measures in addition to those already taken,” she said. “To do this, the fourth wave must be broken, and this has not yet been achieved.”

Merkel said Germany’s ethics council would issue formal guidance on a vaccine mandate, and the Bundestag would vote on the legislation by the end of the year. If passed, the rule would come into force from February.

Under the measures agreed by Germany’s 16 states and federal leaders:

Merkel also announced a blanket ban on people who have not been vaccinated or recovered from Covid entering bars, restaurants, theatres, cinemas and other leisure venues, as well as non-essential shops and Christmas markets.

But Germany is not alone in their persecution of those who have made personal healthcare decisions that are divergent from State guidelines. Austria’s fourth national lockdown of the pandemic will end on Sunday, but lockdown restrictions will remain for unvaccinated people, the country’s new chancellor said Wednesday.

Chancellor Karl Nehammer said the end of the lockdown will be a “opening with a seatbelt,” meaning some measures — such as an obligation to wear masks on public transportation and inside stores and public spaces — will stay in place also for people who are vaccinated or have recovered from COVID-19. There will also be an 11 p.m. curfew for restaurants and limits on the number of people attending cultural events.

Under the lockdown, which started on Nov. 22, people were allowed to leave their homes only for specific reasons, including buying groceries, going to the doctor or exercising. Stricter measures can be implemented independently by regions that are especially affected by the pandemic, Nehammer said.

Nehammer stressed that unvaccinated people could end their lockdowns immediately by getting the jab, but also acknowledged that “it still takes a lot of convincing to get those who haven’t even been vaccinated yet.”

“The lockdown for the unvaccinated continues. I also understand that the people who are affected by it feel aggrieved,” Nehammer told reporters in Vienna. “At the same time, there is the offer of science, that by getting vaccinated these troubles can be quickly put aside and that then common freedom can actually be lived together.”

But freedom cannot coexist with coercion. Austria’s health ministry says anyone who violates the lockdown for the unvaccinated could be fined €500 ($572), while a penalty of €1,450 could be incurred for refusing to participate in checks.

Make no mistake… These nations aren’t satisfied with simply forcing the unvaccinated out of society; they want to force every man, woman, and child to get the jab.

“Given the situation, I think it is appropriate to adopt compulsory vaccination,” said Merkel, who will step aside for Scholz on Wednesday.

The move would follow the example of neighboring Austria, which is planning mandatory vaccinations from February. Greece also announced mandatory jabs for the over-60s, with unvaccinated people facing fines if they fail to comply.

Merkel’s outgoing government had previously ruled out mandatory vaccination, but the measure has since won broad political backing. “We don’t have enough vaccinated people,” Scholz said after the meeting. “We now know that this has consequences.”

Austria has also announced that vaccination would become compulsory as of Feb. 1, the first Western country to take that step, and one of only a handful around the world. With its latest move, Austria significantly moved ahead of other European countries that have inched up to, but not crossed, a threshold that once seemed unthinkable.

Tens of thousands of people took to the streets of Vienna on Saturday, the second weekend of mass protesting over the Austrian government’s decision to impose a tough new lockdown and plan a sweeping nationwide vaccine mandate in the fight against a sharp surge in coronavirus cases and rising deaths.

A vaccine mandate will mean inevitable job losses for those unwilling or unable to submit. Those who do lose their jobs won’t easily have access to unemployment aid. After all, they will be outlaws. In addition, they will be physically constrained, stopped from leading a normal life, and fined.

As people are barred from earning an honest living, many of the fines levied will go unpaid. Arrests, bankruptcies, and more incarcerations will follow. The Austrian state is set to create a new generation of martyrs.

Die Krone Zeitung, Austria’s largest newspaper, writes, “the outlook for the unvaccinated remains entirely bleak.” Being barred from Christmas is the least of it. In fact, any hope for potential loopholes is being dashed. Die Krone Zeitung continues: “Those who slavishly hope that they will be able to ‘exempt’ themselves from compulsory vaccination after 1 February by paying a one-time penalty have been deceived.” They will be made to “pay several times” over, the paper added.

We’ve seen before how creeping government overreach and escalating new restrictions begin… and where they lead.

On February 28th, 1933, German Chancellor Adolf Hitler issued emergency decrees that marked the end of all basic freedoms, including freedom of speech, press, assembly, and protection from arbitrary arrest. He used the Reichstag fire to justify the new government authority.

Less than a month later, parliament passed the Enabling Act, allowing Hitler to establish a dictatorship. By April 7th, the Law for the Restoration of the Professional Service was decreed, excluding Jews and political opponents from university and government positions. Similar laws enacted in the following weeks affect Jewish lawyers, judges, doctors, and teachers.

In 1935, the Law for the Protection of German Blood and Honour and the German Citizenship Law were passed. Known as the “Nuremberg Laws”, they prohibited marriage and sexual relationships between Germans and Jews and stated that only persons of “German or related blood” could be citizens.

In April of 1938, Jews (no longer considered German citizens) were forced to register their assets, a first step toward total exclusion from the German economy. By October, passports of German Jews were marked with “J” for Jude (Jew). Jews were required to surrender their old passports, which became valid only after the letter “J” had been stamped on them. In November, all Jewish children were expelled from public schools and the German Reich Ministry of Interior restricted the freedom of movement of all Jews.

By October of 1939, the first Jewish Ghetto was established in Poland. A month later, all Jews aged 10 and older were required to wear the infamous yellow star, making them immediately identifiable.

But this kind of segregation has been repeated even in the “Land of the Free.” Following the attack on Pearl Harbor, President Franklin D. Roosevelt signed Presidential Proclamation No. 2525, declaring “all natives, citizens, or subjects of the Empire of Japan” living in the U.S. and not naturalized to be “liable to be apprehended, restrained, secured, and removed as alien enemies.”

By December 29th, 1941, all “enemy aliens” in California, Oregon, Washington, Montana, Idaho, Utah, and Nevada were ordered to surrender all “contraband,” including short-wave radios, cameras, binoculars, and weapons.

On January 29, 1942, Attorney General Francis Biddle issued orders to establish “prohibited zones” from which “enemy aliens” were excluded. German, Italian, and Japanese aliens were removed from these areas.

By February, the U.S. Army designated “restricted areas” in which enemy aliens had to observe curfews and were limited in their travel. German, Italian, and Japanese aliens were not allowed to travel more than five miles from their homes in these areas. In some places, Japanese Americans were given 48 hours to evacuate their homes and businesses.

Many would never return to claim their property. Further travel restrictions and exclusion orders were issued. By the spring of 1942, Japanese internment camps had been established. The last camp would not close until March 20th, 1946.

Winston Churchill famously said that those who do not learn history are doomed to repeat it. The world is on a clear path of tyranny and oppression… a path we’ve seen before. It is not an exaggeration to say that resisting these tyrannical decrees and mandates is the greatest duty of our generation.

Maximilien Robespierre, one of the most important figures in the French Revolution, said that “the secret of freedom lies in educating people, whereas the secret of tyranny is in keeping them ignorant.

We cannot remain ignorant. We MUST share the truth. We must not comply. We must defend our freedom now so that our children may not have to.

←
Previous
Ignore the Latest Nonsense About ‘Variants.’ Stay Focused on Dangers of COVID Shots
→
Next
Aluminum Toxicity: 4 Ways to Detox Your Brain & Body