You are here: Home / Vaccine Safety / Is Gardasil More Dangerous than HPV? 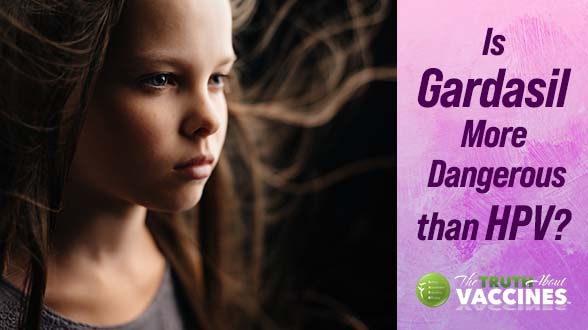 If you have a teenage girl in your family, chances are strong that their doctor has talked about the HPV (human papillomavirus) vaccine called Gardasil. There have been countless ads by the pharmaceutical company who manufactures it, urging parents to take their young women in for the series of shots. Doctors everywhere recommend and even try to insist on giving this HPV vaccination in addition to the many others that most children receive.

It’s purported to be a “miracle” drug that will protect girls against cervical cancer.

In 2007, Texas Governor Rick Perry received public backlash after mandating the HPV vaccine (Gardasil) by executive order. He later rescinded his mandate. California passed a law in 2012 allowing 12-year-olds to receive the vaccine without parental knowledge or consent.

The U.S. Centers for Disease Control (CDC), Food and Drug Administration (FDA), and Merck (the company who produces Gardasil) all claim the HPV vaccination is safe for children as young as nine.

How can they possibly know? Gardasil was fast-tracked through the system meant to safeguard our health and wellbeing. It was approved and rushed to market (like many pharmaceutical drugs with horrific side effects) despite questionable results in regard to safety.

No independent studies have been done to determine if the vaccine itself causes cancer or what the long-term effects might be on those vaccinated.

As should have been expected, a shocking number of girls have had adverse reactions to receiving the HPV vaccination.

Human papillomavirus is a common virus that most women are exposed to at some point in their lives. According to the American Cancer Society, the virus types that cause infection to the cervix are found on the body’s mucous membranes and are a result of sexual intercourse.

There are over 30 strains of HPV that can cause genital infections. The HPV vaccine supposedly protects against four strains and only two of those are known to be cancer-causing.

Problems from the actual virus are rare.

In fact, Dr. Diane Harper, who was involved in phases II and III of the manufacture’s testing of the vaccine, reports there are normally no symptoms and 90% of infections are resolved by the body in as little as two years. Only half of the remaining infections have a rare chance of developing precancerous cells that could lead to cervical cancer.

While the majority of cervical cancers are caused by HPV, most women who have HPV do not develop cervical cancer. However, the pharmaceutical company who makes the HPV vaccine wants every girl and young woman to get another vaccination “just in case.”

Dr. Sherri Tenpenny, physician and advocate for vaccine safety, thinks she knows why. She’s stated there are other risk factors associated with the rare unresolved HPV infections that lead to a cervical cancer diagnosis. These factors could play a larger role in the development of cervical cancer than the virus itself. 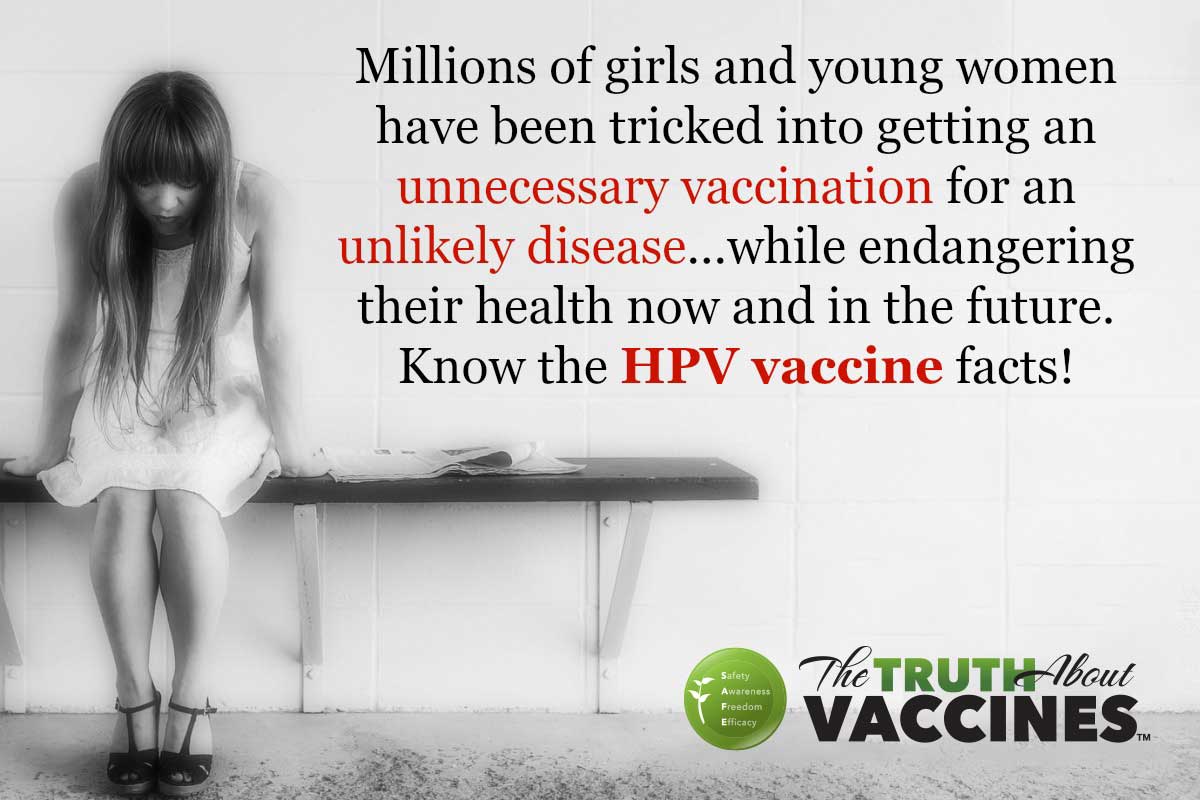 What You Need to Know about Cervical Cancer

Cervical cancer is relatively rare. Most women with HPV will not develop it. There are approximately 4,000 deaths per year from the disease. To put that in perspective, over 71,000 women die of lung cancer and 41,000 die of breast cancer annually.

This form of cancer grows slowly so we won’t know for three decades whether or not the mass vaccination of young females reduces occurrences or lowers the loss of life.

Let’s state that another way…

Millions of children are being injected with an HPV vaccine associated with major side effects to possibly prevent 4,000 deaths annually 30 years from now… with no concrete evidence (or even substantial testing) that it can or will save lives.

Even the FDA acknowledges the long-term benefits of vaccinations rest on assumptions and not solid research data. The death rate attributed to cervical cancer according to the World Health Organization (WHO) is 1.7 per 100,000 in the United States.

That rate is considerably lower than the rate of serious adverse side effects reported by patients to date from the Gardasil vaccine.

HPV Vaccine Laden with Side Effects

As of March 2012, the Vaccine Adverse Reporting System (VAERS) stated there were 25,548 adverse events and over 100 deaths reported as a direct result of the HPV vaccine.

Increased Cancer Risk and Health Problems Due to HPV Vaccination

In the chart below, notice the increase in abnormal pap smears, cervical dysplasia, and cervical cancer AFTER injection with the Gardasil vaccine. 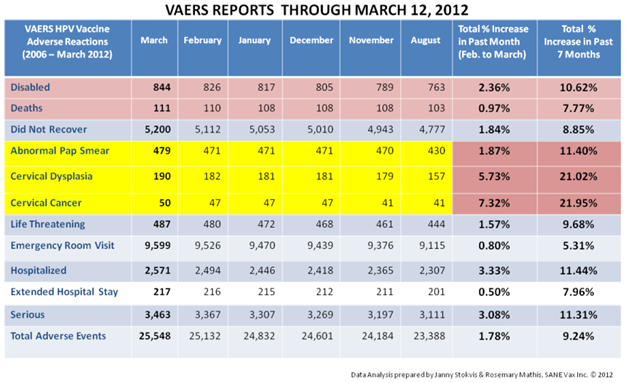 What’s even more concerning is that girls who have already been exposed to HPV have a 44.6% increased risk for precancerous lesions developing after inoculation with Gardasil.

Yet medical professionals have no plans to screen patients prior to vaccination.

A normal phenomenon in virology called “replacement” is when virus strains which have been removed are replaced by new ones.

Dr. Charlotte Haug, an immunologist and chief editor of The Journal of Norwegian Medicine, writes about concerns of increased cancer post vaccination.

Results from clinical trials are not encouraging. Vaccinated women show an increased number of precancerous lesions caused by strains of HPV other than HPV-16 and HPV-18. The results are not statistically significant, but if the trend is real – and further clinical trials should tell us in a few years – there is reason for serious concern.”

It’s recently been discovered that genetically modified HPV DNA, which was firmly attached to the aluminum adjuvant, was found in a 13-year-old girl who developed acute juvenile rheumatoid arthritis following her third Gardasil injection. The consequences of the presence of recombinant HPV DNA (a biohazard) could prove to be catastrophic.

Is the HPV Vaccination for Cervical Cancer Worth the Risk?

According to the FDA’s guidelines, the tolerance for serious adverse reactions should be narrow when injecting a healthy person with a vaccine with uncertain benefits. Yet, Gardasil is marketed widely to girls ages 9 to 12. With such a low death rate from cervical cancer the risk to those vaccinated should be minimal.

If a person has already been exposed to HPV, there’s absolutely no benefit from vaccination.

Most commonly, women do not develop cervical cancer until 35-45 years of age. By this time, most women are receiving annual pap tests which identify early stages of cancer.

The package insert states the vaccine has not been tested to see if it can cause cancer.

As the testing period for the vaccine was too short to evaluate any long-term benefits, manufactures of HPV vaccines have failed to present significant data that their product can prevent cervical cancer.

Invasive cervical cancer takes 20-40 years to develop from the time of HPV infection, so is it really worth all the young lives lost? Is there any benefit at all… for anyone?

It appears the public has been duped.

While well-meaning guardians were misled into having the young women in their care vaccinated with an untested and uncertain drug, the pharmaceutical company raked in billions of dollars in profit. That trickled down to the doctors and agencies who administered it.

These parents have been tricked into giving their children a vaccination they didn’t need for a disease they’re unlikely to ever get.

Check out 25 Reasons to Avoid the Gardasil Vaccine by Children’s Health Defense for even more info.

If you’re concerned about cervical cancer or HPV, eat a well-balanced organic diet and get regular pap tests. Problems from HPV are rare and even more rarely lead to cancer.

Know the facts. The HPV vaccine has been a lottery where the only winners have been the pharmaceutical companies.