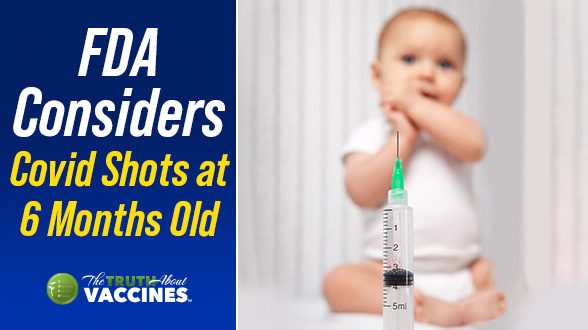 Pfizer and BioNTech have submitted a request to the US Food and Drug Administration (FDA) to amend their emergency use authorization for their COVID-19 vaccine to include children between the ages of 6 months to under 5 years old, according to the companies.

The application is for the first two lower-dose (3 micrograms each) vaccines as part of an eventual three-part primary regimen. The companies say they plan to file for the third dose in the coming months.

“Ultimately, we believe that three doses of the vaccine will be needed for children 6 months through 4 years of age to achieve high levels of protection against current and potential future variants. If two doses are authorized, parents will have the opportunity to begin a COVID-19 vaccination series for their children while awaiting potential authorization of a third dose,” Pfizer CEO Albert Bourla said in a prepared statement.

Here’s what has to happen before little ones under 5 years old can start getting vaccinated against COVID-19.

It remains to be seen whether parents will be eager to embrace the shots if they’re authorized. According to a poll published Tuesday by the Kaiser Family Foundation, more than two-thirds of parents of children in this age group say they’ll wait and see about vaccination or are “definitely” not planning to vaccinate their kids. Nearly one-third of parents say they’ll vaccinate their babies and young children right away.

Pfizer amended its clinical trial in December to study a third shot after two doses of its 3 microgram vaccine did not produce an adequate immune response in children 2 to 4 years old. Adults receive two 30 microgram doses in their primary series of shots.

Pfizer’s vaccine researcher, Dr. Alejandra Gurtman, said last month the drugmaker planned to have the data for kids under 5 ready by the end of March or beginning of April. However, a group of 250 doctors sent a letter last month asking the FDA to cut red tape and authorize the 3-microgram dose for children. The doctors said it was unethical to not give parents the option to vaccinate younger children as the pandemic rages across the country.

“As children re-enter daycare centers, preschools, and other unavoidable group settings, we all know that the number of young children infected with omicron will soar exponentially, creating the largest health risk that kids have faced collectively throughout the entire pandemic,” the doctors wrote in their letter.

John Grabenstein, former executive director of medical affairs for vaccines at Merck, said he believes regulators should consider the vaccine as a two-dose course, rather than as the first two doses of a planned three dose regimen.

“I cannot think of any example ever where the FDA reached a regulatory decision without knowing the data from the end of the trial,” Grabenstein said. “I just can’t believe that they would authorize getting started without knowing what the third dose would do.”

Although few states allow minors of any age to consent to such services, several states mirror existing research on capacity to consent, granting minors autonomy at or around age 14 years. Court intervention may also grant a “mature minor”—adolescents who, after clinical evaluation, are deemed to possess competence to consent or refuse treatment—broad authority over their medical decisions… regardless of the risk.

You can expect the FDA to grant EUA status for Pfizer’s latest concoction for children as young as 6 months by the end of the month. You can expect school boards and daycare centers to start creating incentives and launching propaganda campaigns as early as March. Once the jab is “fully approved,” you can expect that your child will not be allowed in a school, daycare, park, or Chuck-E-Cheese without proof of full (3+ shots) vaccination.

The fight for our children’s future is right here, right now. Start calling your school board members and local representatives. Support candidates that will protect your sacred parental authority above the will of the pharmaceutical machine. Do not comply with unlawful orders. Get loud.

←
Previous
Miscarriages and cancer up 300%, neurological problems up 1,000% due to covid “vaccines”
→
Next
DHS: Here is a List of Top COVID Misinformation Spreaders You Should Investigate ASAP