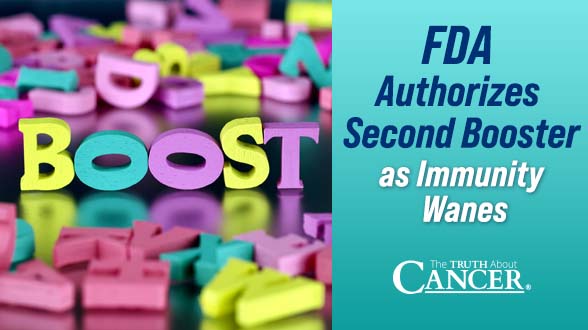 The Food and Drug Administration (FDA) has authorized a fourth dose, or second booster shot, of the Pfizer and Moderna COVID-19 vaccines for adults aged 50 and older and immunocompromised groups.

Dr. Peter Marks, director of the FDA’s Center for Biologics Evaluation and Research, said that the scientific evidence shows that vaccine protection against serious COVID-19 outcomes wanes over time, hence the need for a fourth shot.

In November, the CDC declared that COVID shots provide more immunity than natural exposure to the virus. But new data out of Israel paints a different picture. In fact, researchers found that immunity against the Delta variant from Pfizer’s COVID-19 “vaccine” waned after a few months across all age groups.

Rates of infection in July were higher among adults ages 60 and up who had received their second jab in January compared with those who finished the 2-dose shot in March, reported Yair Goldberg, PhD, of the Technion-Israel Institute of Technology in Haifa and lead author of the study.

Researchers found that antibody levels among 4,800 health care workers fell rapidly within months after two doses of the Pfizer vaccine, “especially among men, among persons 65 years of age or older, and among persons with immunosuppression.“

And the Isreali study wasn’t the only proof that immunity from the shots is vastly inferior to natural immunity from exposure. Research conducted in Southern California has confirmed the dramatic erosion of the Pfizer-BioNTech concoction’s protection against “breakthrough” coronavirus infections.

The new study, one of the largest and longest to track the effectiveness of a “vaccine” in Americans, found that its ability to protect against infection stood at 88% in its first month, then fell to 47% after just five months.

The study, funded by Pfizer and published in the journal Lancet, also provides strong new evidence that the waning immunity against infection probably would have been seen with or without the arrival of the Delta variant.

In another study of Pfizer’s MrNA cocktail, researchers in Qatar found that “protection against infection builds rapidly after the first dose, peaks in the first month after the second dose, and then gradually wanes in subsequent months,” Laith Abu-Raddad, of Weill Cornell Medicine-Qatar, and colleagues wrote.

“The waning appears to accelerate after the fourth month, to reach a low level of approximately 20% in subsequent months,” they added.

Biden administration officials have said that the U.S. government currently has enough doses of the vaccines to meet the demand for another round of booster shots in older Americans, even as funding for the U.S. pandemic response has all but run out.

They say that unless Congress approves more spending, the government will not be likely to be able to pay for future inoculations, particularly if the vaccines need to be redesigned to target new variants.

All signs point to another push by the government to add more reckless spending to the budget, further crippling the American economy. But more important than the economic impact or ineffectiveness of the “vaccines” is the danger they pose.

Three military doctors from the Department of Defense (DoD) who have access to vaccination data that has been withheld from the general public procured the information. They are Lt. Col. Theresa Long, Dr. Samuel Sigoloff and Lt. Colonel Peter Chambers.What these three whistleblowers showed with the data is that miscarriages have increased by 300% over the past year, as have cancers. Neurological problems increased 1,000% during the same timeframe.

In January, the CDC released new data showing a total of 1,071,856 reports of adverse events following COVID vaccines were submitted between Dec. 14, 2020, and Jan. 21, 2022, to the Vaccine Adverse Event Reporting System (VAERS). VAERS is the primary government-funded system for reporting adverse vaccine reactions in the U.S.

Analysis of medical data suggests that boys aged 12 to 15, with no underlying medical conditions, are four to six times more likely to be diagnosed with vaccine-related myocarditis than ending up in hospital with Covid over a four-month period.

Earlier this week, we shared an exclusive interview from The Defender detailing the tragic story of a woman who suffered severe side effects from the shot, ultimately dying a few months after her second dose.

Sprague’s husband said doctors were “totally noncommittal” on whether the Pfizer vaccine caused Jennifer’s CJD, but the nurses became interested in the connection after reading an article in The Defender about Cheryl Cohen, who also experienced rapid-onset sporadic CJD and died within three months of her second Pfizer dose.

It’s been said that insanity is doing the same thing over and over again and expecting a different result. From the outset of the pandemic, governments across the globe have invested heavily in vaccines as the solution to COVID. They’ve ignored or outlawed promising prevention methods and treatments that don’t possess the income potential of proprietary shots.

Last year, Pfizer, Moderna, and BioNTech made approximately $34 BILLION in profits. That’s over $93 million per day, $65,00 a minute, and over $1,000 per second. The approval of yet another round of the dangerous, ineffective “medicine” will only serve to increase those numbers.

As long as money is guiding our political and medical policy, people will continue to die. Apparently, that’s a pill the FDA is willing to swallow.