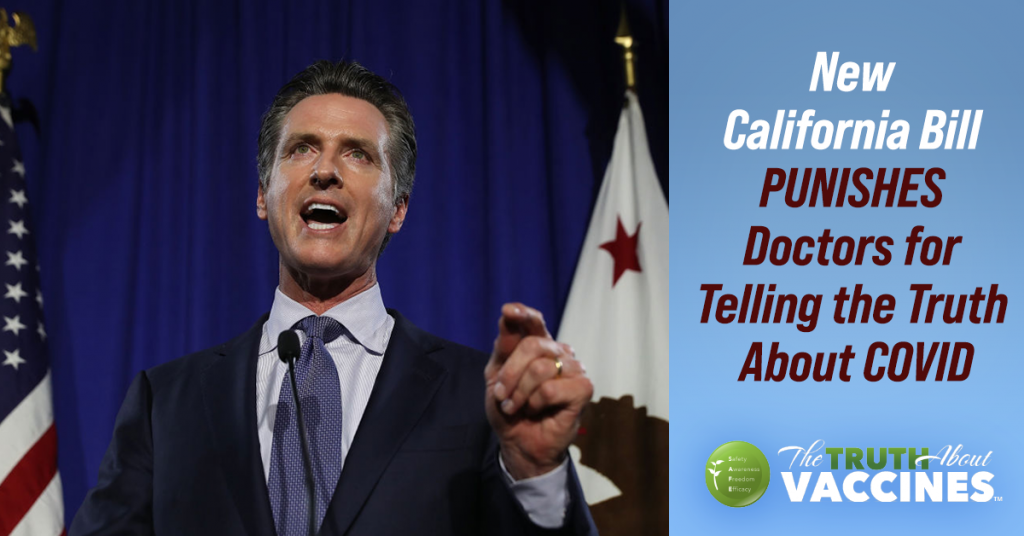 California Governor Gavin Newsom on Friday signed into law Assembly Bill 2098, legislation that equips the state to punish doctors who spread misinformation during interactions with patients. The bill does not apply to public comments, such as social media or interviews.

Following Newsom’s signature of one of the most controversial pieces of pandemic legislation to date, California doctors will now be subject to discipline and possible suspension of their licenses to practice for giving their patients advice or information that contradicts the “contemporary scientific consensus”.

Newsom said the law applies only to physicians’ speech with patients during discussions directly related to COVID-19 treatment. This is particularly interesting, because it means that doctors cannot be punished for spreading false information regarding other diseases or health complications.

If the intent of the bill is to ensure that patients receive the most accurate information, why limit its scope to only COVID-19? More importantly, is it really right for physicians to be threatened with suspension or revocation of their license for offering nuanced guidance on a complex issue that is hardly settled by existing science?

“Misinformation” is a highly dubious and debatable category. The “scientific consensus” has often expressed views relating to COVID-19 that were later contradicted. Science is a deliberative process, and medical professionals need to be allowed to dissent from mainstream orthodoxies and challenge dominant perspectives. Patients deserve expert care, but it’s unreasonable for the government to compel ideological conformity in this field.

Newsom acknowledged that he is “concerned about the chilling effect other potential laws may have on physicians and surgeons who need to be able to effectively talk to their patients about the risks and benefits of treatments for a disease that appeared in just the last few years.

“However,” he continued, “I am confident that discussing emerging ideas or treatments including the subsequent risks and benefits does not constitute misinformation or disinformation under this bill’s criteria.”

But is that true?

According to the bill: “It shall constitute unprofessional conduct for a physician and surgeon to disseminate misinformation or disinformation related to COVID-19, including false or misleading information regarding the nature and risks of the virus, its prevention and treatment; and the development, safety, and effectiveness of COVID-19 vaccines.”

That’s painting with a pretty broad brush, to put it mildly. Government officials and public health “experts” have shown no particular aptitude for discerning what constitutes genuine misinformation. On the contrary, government actors have frequently instructed social media companies to be wary of perfectly legitimate points of view.

Our good friend Robert F. Kennedy, Jr. correctly identified the biggest threat to public health when he said that the law “fundamentally changes the sacred relationship between physician and patient that has existed since Hippocrates.”

“Under the new rubric, the doctor no longer serves the best interest of the patient but acts as an agent of state policy,” he added.

“History is replete with nightmarish examples of what happens when doctors stop healing and act instead to advance ‘the greater good.’ Governments have variously cited that phrase to justify euthanasia of the elderly, mental defectives, homosexuals, and other ‘useless eaters’ and to enforce ‘one-child’ policies.”

It’s also likely that this bill violates the First Amendment. Governments have the power to regulate medical care, but the compelled speech component of AB 2098 would probably perturb the Supreme Court. Even some legal experts who support the bill’s goals concede that it will have a hard time surviving scrutiny.

“Initiatives like this will be challenged in court and will be hard to sustain,” Michelle Mello, a professor of law and health policy at Stanford University, told The New York Times.

Dr. Peter McCullough (who we recently interviewed at our home) also expressed grave concern about the damage this bill could cause to California healthcare:

“As a medical expert treating patients with COVID-19 and vaccine injury syndromes, I anticipate AB 2098 will cause physicians to retract from treating such patients. AB 2098 makes it impossible for healthcare providers to have honest and fully informed conversations about the rapidly evolving pandemic and the health problems it has brought to Californians.

This new law hurts the most vulnerable at a time when they need their physicians to be honest and forthright. California is on a slippery slope of medical totalitarianism.”

We wrote in August about the CDC’s updated COVID guidelines, which now offer the same recommendations for patients regardless of vaccination status. Under California’s new bill, many doctors could have been punished for providing information that is now accepted by the “contemporary scientific consensus.”

Leana Wen, a professor at George Washington University’s Milken Institute School of Public Health, former Baltimore health commissioner and author who writes a column for the Washington Post, published an op-ed in early September that summarizes the issue:

“California’s bill is a recipe for medical practice to be subject to the whims of partisan politics. And it challenges the basis of the doctor-patient relationship. At a time of deep division, when trust in health officials has already been eroded, bills that threaten doctors should be reconsidered before unintended consequences create far more problems than the legislation tries to solve.”

We’ll leave you with this:

The bill specifies misinformation about “the development, safety, and effectiveness of COVID-19 vaccines” as grounds for punishment. As of September 23rd, The Vaccine Adverse Event Reporting System (VAERS) has recorded:

This is not about public health. It’s not about combating “misinformation.” It’s not about saving lives. It’s about restricting doctors to ensure that the official narrative is the only acceptable narrative.

This bill is going to permanently damage the doctor-patient relationship, crippling practitioners and resulting in even more unnecessary loss of life.