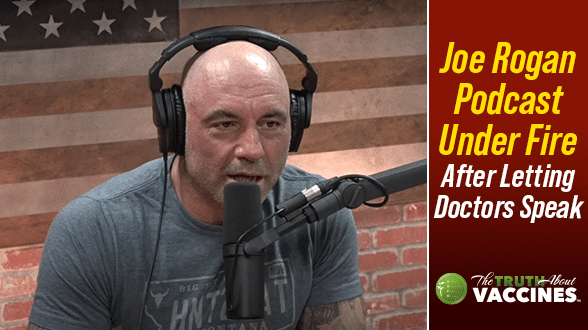 Hundreds of doctors have signed a petition for Spotify to remove The Joe Rogan Experience from its platform. The letter highlights an episode of the podcast that aired Dec. 31 and featured Dr. Robert Malone, who Twitter says it suspended from the social media platform over COVID-19 misinformation.

The letter said that Malone used the episode to “further promote numerous baseless claims” about the coronavirus, including the COVID-19 vaccines. To understand why this is such a big deal, it’s important that you know what the Joe Rogan Experience really is.

Joe Rogan is the most popular podcaster in the world. The comedian and UFC commentator has arguably the largest audience in the world. In April of 2019, his podcast was downloaded over 190 MILLION times. And that was before the Spotify deal.

In September of 2020, Rogan signed a $100 million deal with Spotify to make them his exclusive streaming service. As part of the deal, Rogan controls the show – and can pretty much say whatever he wants.

But the Joe Rogan Experience is less about Rogan’s own thoughts and opinions and more about his star-studded lineup of guests. The podcast has featured politicians, athletes, comedians, chefs, doctors, and just about any other profession you can think of.

Even better, the show is diverse. Whether the JRE features Bernie Sanders, Neil deGrasse Tyson, Elon Musk, Alex Jones, you can count on Joe to deliver a show that is unscripted and personal. With most episodes coming in at about 3 hours long, it’s one of the best ways to hear from some of the world’s most interesting people.

But recent guests, including Dr. Malone and Dr. Peter McCullough, have drawn the ire of the pharmaceutical and mainstream media industries. Both Doctors are experts in their fields and spoke at some length about the efficacy and safety of the COVID shots and the suppression of alternative or prophylactic treatments.

The letter said that “mass-misinformation events” have “extraordinarily dangerous ramifications.”

“As scientists, we face backlash and resistance as the public grows to distrust our research and expertise. As educators and science communicators, we are tasked with repairing the public’s damaged understanding of science and medicine. As physicians, we bear the arduous weight of a pandemic that has stretched our medical systems to their limits and only stands to be exacerbated by the anti-vaccination sentiment woven into this and other episodes of Rogan’s podcast,” the letter said.

But the letter — signed by 270 medical experts — said that episode is not the only “transgression to occur on the Spotify platform. By allowing the propagation of false and societally harmful assertions, Spotify is enabling its hosted media to damage public trust in scientific research and sow doubt in the credibility of data-driven guidance offered by medical professionals,” the letter added.

But Dr. Malone – who was banned from Twitter just days before recording the show – had his own thoughts about censoring information. From his JRE interview:

“There are two hills that I’m willing to die on: one is stopping the jabs in the children, and one is resisting the erosion of free speech – Which is the fundamental principle on which our democracy, our society, and civilized western culture is built on. I like to say when I give rallies do you remember back a couple of years ago when you felt sorry for the people in the People’s Republic of China because their internet was filtered, they weren’t allowed free speech, their government told them what to do and think? Okay now here we are.”

And these doctors are not the only ones to protest Rogan’s right to free speech. Singer Neil Young earlier this week penned an open letter to his manager and label asking them to remove his music from the service, saying it is spreading fake information about Covid-19 vaccines through Mr. Rogan’s show. “They can have Rogan or Young. Not both,” he wrote.

Spotify acquiesced the “Heart of Gold” artist today, removing his entire catalog from the streaming service. Young’s songs were streamed about 6 million times a month – roughly 5 million less than Rogan currently gets on each episode.

Podcasts have become the last bastion of freedom in today’s media, with most creators free to express their opinions and ideas without fear of censorship. But that freedom is under attack. If medical doctors and professional virologists are not allowed to be part of the conversation, who is?

As Rogan pointed out, “It’s crazy because you’re self-censoring about your area of expertise – which is insane, because the people who are censoring you don’t have any education in it.”

When the mob is allowed to control the flow of information, freedom is truly lost.

If you want to help, we are constantly being attacked by the mainstream media and big tech censor Nazis. Please sign up for our newsletter (and receive a FREE eBook!) and visit the TTAC Store to help support our mission! Thanks in advance!