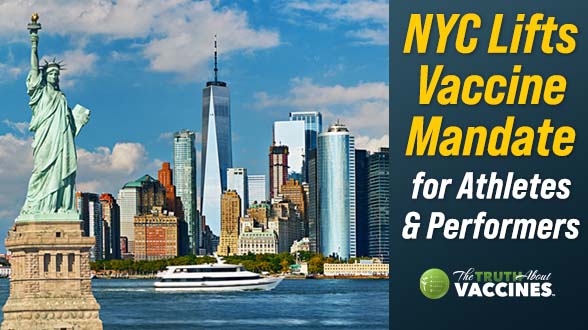 New York City Mayor Eric Adams announced yesterday that athletes and performers would no longer be subject to the city’s strict vaccine mandates for the private sector. The executive order has elicited backlash from both supporters of the mandate and those who have been put out of work by them.

Until now, unvaccinated players on NYC teams were unable to play in their home venues – even though most were allowed to play in other cities. This includes the Brooklyn Nets, New York Knicks, New York Yankees, and New York Mets.

Other performers will also be exempt under Mayor Adams’ executive order, bringing more artists back to the city’s venues.

Earlier this month, Adams nixed rules that required patrons of indoor establishments – such as restaurants, bars, and gyms – to be vaccinated. Those new rules, however, fail to include the support staff that make these events possible. While a basketball player or musician can now perform at NYC venues, concessions workers, security staff, Audio crews, and the like are still subject to the vaccine mandate.

Unvaccinated Harlem resident Elissa Embree choked back tears while telling The Washington Post how she was sent home last week from preseason orientation for her job as a waitress at the Mets’ Citi Field, where the athletes she supports are now able to play. .

“I’m not as important as a Met is, because a Met will fill Citi Field, which fills the coffers of New York,” she said. “They don’t care about little ol’ me, who pays middle class taxes. The elusive ‘they’ don’t care that I have been out of work and that I have been at my breaking point.”

The most high-profile case is Nets star guard Kyrie Irving, who is not vaccinated against COVID-19 and made clear he would not be getting the vaccine at any point. The Nets originally started the season without Irving because of his decision not to get vaccinated but have since allowed him to play in games not hosted in NYC.

“A small number of people have an outsized impact on our economy,” Adams said.

And that’s really what this new executive order is about: money.

While our first reaction was to applaud Mayor Adams’ decision to roll back mandates, the truth is that he’s simply protecting the city’s income. Everyday employees in the private sector are still subject to the mandate. Many of them are outraged.

FDNY firefighter Sophy Medina — who’s been on unpaid leave since applying for a religious exemption from the vaccine mandate in November — is one of those employees.

“There should be a re-entry program for workers to get their jobs back,” said Harry Nespoli, president of the Uniformed Sanitationmen’s Association and chair of the Municipal Labor Committee. “There can’t be one system for the elite and another for the essential workers of our city. We stand ready to work out the details with the mayor, as we have been throughout this process.”

Kelly Finlaw, an arts teacher in Washington Heights for 16 years, was one of the city’s 956 school employees fired for not getting vaccinated. Ms. Finlaw, who was fired last week, said she is unvaccinated because she had adverse reactions to vaccines as a child and because she has lingering questions about its safety.

She said she applied for exemptions to the mandate for teachers three times and was denied.

Ms. Finlaw said the exemption to the vaccine mandate for athletes and performers made Mayor Adams look “foolish” and demonstrated that decisions were made around politics, not public health.

“When Kyrie decided to not get vaccinated and was willing to take a stand for it in the beginning, I was very, very grateful because he has notoriety that no teacher is ever going to have,” Ms. Finlaw said.

Mr. Irving, she added, “doesn’t do more important work than I do.”

And she’s absolutely right. While superstar athletes and artists admittedly generate more income for the city, their roles are not nearly as important as the roles of teachers, firefighters, and a litany of other “less-than” employees who have been impacted by these unconstitutional mandates.

The mayor’s decision reverberated beyond the sports world and into the political spectrum, transcending party lines. Lee Zeldin, who is running for governor on the Republican line, said the mayor’s action bolstered the party’s argument for getting rid of the vaccine mandate entirely.

Adrienne Adams, the current Council speaker and a Democrat, said the move smacked of “inequity” and warned that the mayor was sending “increasingly ambiguous messages” about public health at a time when the coronavirus case count is rising.

Jay Varma, the former health adviser for Mr. Adams’s predecessor, Bill de Blasio (another democrat), warned that the move opened the city up to legal action on the grounds that the remaining mandate is “arbitrary and capricious.”

The arbitrary rules to which the American people have been subjected are not based in science. They have been used to control us, making us more dependent on the government while favoring the rich and powerful.

While there is some hope that the new rule will open legal avenues for the unvaccinated to reclaim or retain their jobs, there’s something even more important that you can do to combat the rampant tyranny we’ve faced over the last few years: RESIST.

Relying on the system that allowed these mandates in the first place to retrace their steps and fix the damage is a pipe dream. We need to stand together and raise our voices against this new American oppression. Stop supporting businesses that require masks and vaccine passports. Stop supporting elected officials that were so swift in revoking your bodily autonomy.

It will be hard. It might affect your social life, your children’s schooling, or even your job. But freedom is never free. If we acquiesce to these mandates now, I promise you… it will only be the beginning.