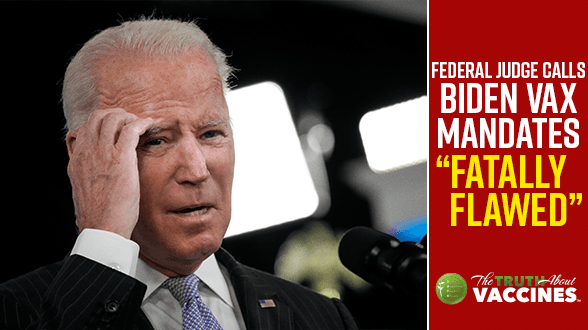 The Occupational Safety and Health Administration (OSHA) is suspending enforcement of the Biden administration’s COVID-19 vaccine mandate for large private businesses after the 5th U.S. Circuit Court of Appeals said the mandate was “fatally flawed,” and barred OSHA from enforcing the mandate “pending adequate judicial review” of a motion for permanent injunction.

OSHA shall “take no steps to implement or enforce the mandate until further court order,” the ruling stated.

“The court ordered that OSHA ‘take no steps to implement or enforce’ the ETS [Emergency Temporary Standard] ‘until further court order.’ While OSHA remains confident in its authority to protect workers in emergencies, OSHA has suspended activities related to the implementation and enforcement of the ETS pending future developments in the litigation,” OSHA said.

Judge Kurt D. Engelhardt, in an opinion for the three-judge panel, called Biden’s vaccine and testing requirements for private businesses “fatally flawed” and “staggeringly overbroad,” arguing that the requirements likely exceed the authority of the federal government and raise “serious constitutional concerns.”

There was a frantic struggle after Biden announced the totalitarian mandates, with attorneys general, private businesses, and national industry groups such as the National Retail Federation, American Trucking Associations, and National Federation of Independent Business suing to overturn the requirements.

Meanwhile, Biden and his administration had directed businesses to start implementing the new requirements. They knew that the mandate would likely fail in court; more than half of U.S. states (27, to be exact) vowed to fight them.

But Biden knew his mandates were unconstitutional… he just didn’t care. It seems his only goal was to force as many people to get the jab as possible. In some ways, it worked. In fear of losing their jobs, many workers received the jab. They had no way of knowing if or when the courts would strike down the mandate.

In December, Biden told Americans he would not impose a national vaccine mandate, reassuring people that their core freedoms would be protected even as the nation fought the coronavirus. Now, even though more than 75% of U.S. adults — and over 90% of senior citizens — have received at least one dose, Biden has reversed course. What was unthinkable then has now essentially become federal policy.

Under our federal system, the U.S. government does not have the power to require an adult American to do something with, or put something into, his or her body. It doesn’t even have the power to order an adult to buy a commercial product: That’s why Obamacare’s individual “mandate” was structured as a tax rather than a command. Even the Obama administration understood that the federal government could not constitutionally treat its citizens like subjects.

Biden said he was running for president to “restore the soul of America.” But the country’s soul – its very heartbeat from its initial gestation in 1776 – is the freedom of the individual from arbitrary government power.

“When you have a president like Biden issuing unconstitutional edicts against the American people, we have a responsibility to stand up for the Constitution and to fight back, and we are doing that in the state of Florida,” said Governor Ron DeSantis. “This is a president who has acknowledged in the past he does not have the authority to force this on anybody, and this order would result potentially in millions of Americans losing their jobs.”

But the mainstream media, which increasingly resembles a fascist, state-run media, have overwhelmingly supported the unconstitutional measures. CNN bashed the Fifth Circuit as “notoriously conservative.” Vox dismissed it as a “right-wing panel.” Washington Post columnist Ruth Marcus slammed the judges’ “stingy vision of the federal government’s powers” and threw up her hands: “Maintaining our constitutional structure? How about saving lives?”

Conspicuously lacking in the left’s response is a legal defense of the mandate. It’s indefensible. Even before Friday’s ruling, Biden’s spokesperson Karine Jean-Pierre told employers to bulldoze ahead, disregarding legal challenges.

This illustrates how little the Biden administration and Democrats care about the rule of law and individual freedoms… and it’s why we need to be vocal when it comes to our fundamental freedoms. The government is NOT in control of your medical decisions, religious freedoms, ability to work or travel, or your child’s education.

This court ruling is a huge win… for now.