You are here: Home / Videos / Fear, Government, and Freedom [VIDEO]

So I want you to take a look at these moms, these influencers, these freedom keepers. Most of these mothers have vaccine-injured children and there are thousands more like them. And while we were all asleep at the wheel, enjoying our freedoms, they were out there leading the charge to fight for us to keep them. And just for the record, they’re not wearing masks. They are making a statement. When California recently passed a Senate bill to remove current medical exemptions from children harmed by vaccines, they were not allowed to speak. They weren’t interested in hearing what they had to say. So they taped their mouths shut. And then they put tape on their hands, and in black Sharpie, they wrote, “Lie,” on the palm of their hands. And every time a Senator would spout lies, they would silently hold their hands up like this. And their silence spoke volumes.

Now, after living in California, I have learned that the game is rigged. The battle was lost when we allowed states to mandate school vaccination with exemptions. We thought that was a victory at the time because they made allowances for philosophical, religious, and medical exemptions. But the second you agree to exemptions, you are in essence agreeing to the mandate. And we the people have allowed our government employees to hold our children’s education hostage in exchange for a medical procedure that admittedly has a side effect of death. You see how this is rigged. They did this knowing that one by one, they will remove every single medical exemption. And guess what? That’s exactly what they did.

So if you think that you are protected by your exemption from a COVID vaccine, guess again. Eventually they will come for those exemptions too. And should you be on the list of people that are injured, incapacitated, or killed as a result of this vaccine, oh well, they’re protected by law and you are owed nothing, as they say you are collateral damage for the greater good. You want to piss a mother off, you tell them their child is collateral damage for a greater good. Whew.

Now I was a silent cheerleader working behind the scenes as these brave women fought on the front lines for me because I was too afraid that if it came out that I had children with adverse events that I would never work again. And if I couldn’t work, how could I pay for their therapies? How could I pay for their healing? How would I afford to live, to provide for them? I want to be very clear about something. I let fear silence me. The government didn’t do it. Fear had. And that was my fault. That was on me. Then, COVID was announced.

So this is when that fear that had kept me silenced, kept me paralyzed, this is when
the fear collided head on with logic.

So we apply logic to fear and fear takes a backseat. Sometimes crushing fear can get overwhelming. In fact, the more you try to push it away, the bigger it becomes. Because fear doesn’t like to be pushed around and told what to do. It makes it angry. So you know what I do? I give it this look. Mm-hmm, like that. That’s my serious smoldering look. That’s my “I mean business” look. And when I give my kids that look, they know mama’s not going to be pushed around today.

So I give this look to fear and I say, “Fear, I’m going places today and you’re not going to stop me. Now, you can come with me, but you’re not allowed to drive the car. In fact, you’re not allowed in my passenger seat because, well, God is my co-pilot and there’s just not room for you there. You can’t sit right behind me, that’s where the kids sit. So you’re going to sit in the way backseat. And I’m putting you in a baby seat. One of those with a five point harness so you can’t get out of it. So you can come with me, but you’re going to be quiet today because I have some powerful stuff to say, and I don’t want to hear a word out of you.”

When I stood up to speak that day at the school board meeting, I had no idea what I was going to say. I didn’t. I’d just bought those books. They had literally been just delivered that day. And my friend Carrie had called me on the speaker while I was driving in the car with my boys and asked if I could speak on behalf of the kids in our school district. Originally, I would say that, “I’m busy. I’m having a day with my kids. I’m just busy.”

But my oldest son immediately said to me, “Mom, we think it’s awful that those kids have to wear those things all day, those dirty things. They don’t even work.” And my youngest said, “Mom, you should go help them. You’ve always taught us to speak up and I bet they would listen to you.” I didn’t have the heart to tell them that the game is rigged. But I also didn’t have the heart to tell them no. So Carrie came by to pick me up. And last minute I grabbed those books. And I thought maybe I could use them to rally the crowd outside, to give them hope, to get people interested in the history of our freedoms. I had no idea what I was going to say that day, but when I got up there and when I walked up to that podium, I was overcome with gratitude.

It dawned on me in that very moment that I was so thankful to live in a country where I have the First Amendment right to speak freely. It did not go unnoticed on me that the very freedom that has been threatened by big tech, big pharma, and this new communist administration, this very freedom I was now getting to use, the freedom of speech. It’s really freedom of thought, when you think about it. Freedom of thought with expression. It’s one of those unalienable God-given rights. I didn’t have to earn it. It was simply mine for being born in a free country founded under God. Not under government, under God. 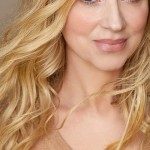 Leigh-Allyn Baker is an actress and medical freedom activist.