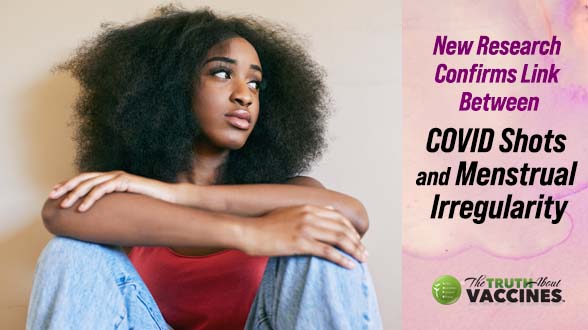 New research has discovered that COVID shots are causing major disruptions to women’s menstrual cycles. The study, published on July 15th in Science Advances, provides the most comprehensive data on the effects of COVID-19 vaccines on menstrual cycles so far.

The analysis found that 42% of people with regular menstrual cycles said they bled more heavily than usual after vaccination. Meanwhile, 44% reported no change and around 14% reported a lighter period. Among nonmenstruating people — those post-menopause or who use certain long-term contraceptives, for example — the study suggests many experienced breakthrough or unexpected bleeding after their Covid shots.

The new survey started in April 2021, around the time people began to report unexpected bleeding and heavier flow post-vaccine. However, these anecdotes were at the time met with the rebuttal that there was no data linking menstrual changes to vaccination.

Technically, that was true.

The 2020 trials of the first COVID-19 vaccines reported that some participants experienced tenderness, pain, warmth, itching or bruising at the injection site, in addition to some tiredness, chills, joint pain and nausea.

But the clinical trials did not explore whether COVID-19 vaccines have any side effects on the menstrual cycle. This is not a rare case; clinical research has been criticized for a lack of inclusivity, with the “complexities of the menstrual cycle” even being cited as a basis to exclude certain individuals from research studies.

In early 2021, reports of menstrual cycle changes post-COVID-19 vaccination began to emerge across formal channels, including the UK’s Yellow Card Scheme, and social media. This prompted researchers such as Dr. Kathryn Clancy, professor of anthropology at the University of Illinois Urbana-Champaign, and Dr. Katharine Lee, professor of anthropology at Tulane University, to start collecting data on these reports.

“Dr. Lee and I had our own wonky period experiences post-vaccine,” says Clancy. “If Dr. Lee hadn’t pointed them out to me first, I may never have made the connection myself. After I tweeted about it and the response was overwhelming, we designed a survey instrument that would allow us to capture these experiences as well as any factors that might make one more at risk of this side effect. We really wanted to listen to people and validate their concerns because there were so many who were quick to dismiss them.”

However, the new survey is not the first published research to warn of the potential disruption to menstrual cycles resulting from the experimental COVID shots. In April 2022, a study published in Obstetrics & Gynecology — and funded by the National Institute of Child Health and Human Development and the National Institutes of Health’s Office of Research on Women’s Health — confirmed an association between menstrual cycle length and COVID-19 shots.

The April study involved 3,959 individuals between the ages of 18 and 45 years. Those who had not received a COVID-19 shot noted no significant changes in their fourth cycle during the study compared to their first three cycles.

While the researchers described the change as not clinically significant, meaning it’s not notable from a health standpoint, there were some women who experienced even greater menstrual changes, particularly those who received two shots in the same menstrual cycle.

These changes included a two-day increase in cycle length and, in some cases, changes in cycle length of eight days or more. Despite this, the researchers largely brushed off the findings because cycle lengths seemed to return to normal within two post-shot cycles:

“A subset of individuals who received both vaccine doses in a single cycle had, on average, an adjusted 2-day increase in their vaccination cycle length compared with unvaccinated individuals. Although approximately 10% of these individuals experienced a clinically notable change in cycle length of 8 days or more, this change attenuated quickly within two post-vaccine cycles.”

As we mentioned before, the preliminary trials did not investigate changes in menstrual cycles. Even the Vaccine Adverse Event Reporting System (VAERS) fails to actively collect this information. With the speed at which these experimental “vaccines” were pushed through the approval process, there is still much that is unknown about the potential side effects of the new mRNA technology.

And menstrual irregularity may not be the only risk for women.

Pregnant women were excluded from the mRNA injection clinical trials, but a Pfizer-BioNTech rat study revealed the injection more than doubled the incidence of pre-implantation loss and also led to a low incidence of mouth/jaw malformations, gastroschisis (a birth defect of the abdominal wall) and abnormalities in the right-sided aortic arch and cervical vertebrae in the fetuses.

Pfizer’s biodistribution study, which was used to determine where the injected substances go in the body, also showed the COVID spike protein from the shots accumulated in “quite high concentrations” in the ovaries.

A Japanese biodistribution study for Pfizer’s jab also found that vaccine particles move from the injection site to the blood, after which circulating spike proteins are free to travel throughout the body, including to the ovaries, liver, neurological tissues and other organs.

Already, global fertility rates are falling, reaching 2.4 births per woman in 2018, down from 5.06 in 1964. Fertility rates in about 50% of countries worldwide are at 2.1, which is below population replacement level, The Guardian reported. If further stressors are introduced, it could be catastrophic.

A CDC-sponsored study that was widely used to support the U.S. recommendation for pregnant women to get injected “presents falsely reassuring statistics related to the risk of spontaneous abortion in early pregnancy,” according to the Institute for Pure and Applied Knowledge (IPAK).

When the risk of miscarriage was recalculated to include all women injected prior to 20 weeks’ gestation, the incidence was seven to eight times higher than the original study indicated, with a cumulative incidence of miscarriage ranging from 82% to 91%.

Not only does IPAK’s data show COVID-19 injections prior to 20 weeks are unsafe for pregnant women, but 12.6% of women who received it in the 3rd trimester reported Grade 3 adverse events, which are severe or medically significant but not immediately life-threatening. Another 8% also reported a fever of 38 degrees C (100.4 degrees F), which can lead to miscarriage or premature labor.

Further, the study follow-up only continued for 28 days after birth, meaning the long-term effects of prenatal exposure to babies is unknown. The many concerns of mRNA COVID-19 injections during pregnancy and breastfeeding include inhibition of synctyin-1, a protein essential for cell fusion and placental development, and transmission of mRNA and spike protein across the placenta and through breast milk.

We know that COVID is primarily dangerous for the elderly, the obese, and those with underlying medical conditions. We know that healthy children are at virtually zero risk of severe illness or death from the virus.

We know that over 75% of vaccine-related deaths reported to VAERS over the past 32 years have been associated with COVID shots that were only introduced a year and a half ago. We know that early treatments were blocked by the medical establishment while hospitals were paid for every COVID death and every patient put on a ventilator.

From periods and pregnancy to inflammation and inflation, these dangerous, experimental jabs are nothing but trouble.

←
Previous
‘Like a Horror Movie’: Top Scientists Alarmed and Embarrassed by Agencies’ Failure to Follow Science on COVID
→
Next
Is Gardasil More Dangerous than HPV?