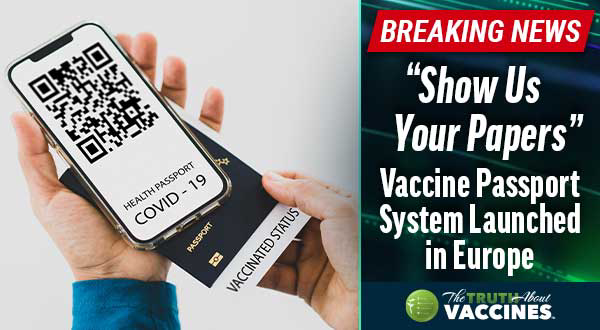 Vaccine passports are officially a reality, as the European Union became the first group of nations to roll out a digital record of a person’s vaccination status. The launch signals a terrifying new era of government control that could change the very face of international travel.

The EU’s first-of-a-kind digital health certificate permits people who have been vaccinated to travel freely within the bloc without the need to quarantine or test negative for Covid-19 upon arrival at their destination. Currently, travelers will either be subjected to the unreliable PCR tests or required to quarantine for up to 14 days.

As of June 8, there were nine EU member states signed up: Bulgaria, Croatia, the Czech Republic, Denmark, Germany, Greece, Lithuania, Poland and Spain (although the European Union Digital COVID Certificates (EUDCC) have now been issued to citizens in 17 countries).

About 200 million certificates have been generated among a population of about 450 million. The documents contain data on whether a passenger has received a vaccination, or has had a recent negative Covid-19 test, or proof of antibodies. The European Commission, the EU’s executive arm, has told governments they must grant quarantine-free entry to EU travelers carrying the documents.

The certificate, which includes a QR code and digital signature, can either be displayed on a digital device or printed out. European citizens and noncitizens legally living in the EU can access the document, which contains a scannable QR code, online. Depending on the national system in place, the document can be downloaded to a mobile app or printed. States are required to provide scanning devices to verify the documentation.

While travel will still be possible without the document, those who decline to participate may find their ability to travel significantly restricted. Additionally, there are fears that the passports will usher in a new age of government surveillance and globalist data tracking.

And these fears aren’t totally unfounded.

Civil rights campaigners have warned that “mission creep” could result in the UK using a vaccine passport as a pseudo national ID card after an American IT company contracted by the British government to develop a “COVID Certification” pass suggested that the health passes could become part of the “new normal”.

Entrust, which describes itself as a “global leader in identities, payments, and data protection”, was given £250,000 by the UK in May to develop cloud software for the government’s COVID-status certification scheme run by NHSX — the digital arm of the nation’s socialized healthcare system.

In a February blog post, the product marketing director for the firm, Jenn Markey said that “vaccine credentials can become part of the infrastructure of the new normal”.

“With the infrastructure and investment necessary to ensure a viable vaccine passport, why not redeploy this effort into a national citizen ID program that can be used for multiple purposes, including the secure delivery of government services, secure cross-border travel, and documentation of vaccination,” she suggested.

Former Brexit Secretary and civil rights advocate David Davis told the paper that the implementation of vaccine passports domestically is an “intrusive” and “very bad idea” which he noted is “completely out of the tradition of Britain”.

Davis noted that there were 9,000 data leaks of government records last year alone, saying: “There are very serious civil liberties issues, serious issues of practicality, and serious issues of discrimination.”

This is a terrifying thought, and a major initiative of the Great Reset. Creating a national database that can track movement, medical records, and other data flies in the face of our fundamental freedoms and privacy.

Comparisons could be made to China’s social credit system, which has been used by the regime in Beijing to discriminate against people who fail to uphold the values of the Communist Party. The score, which measures seemingly mundane activities, awarding positive points for buying things like diapers and subtractions for buying alcohol, has seen tens of millions of citizens barred from travelling because their score was too low.

How long before we’re required to show our papers in order to send our children to school or travel freely throughout the nation? Remember that just a few short months ago, even states in the U.S. banned interstate travel based on faulty and misreported COVID data.

With the exception of North Dakota, South Dakota, Nebraska, Iowa, Wyoming, Arkansas, and Utah, every governor in the U.S. also issued lockdown or “stay at home” orders that restricted residents from traveling within or outside their respective states.

As new mandates and tracking technology are introduced, it’s imperative that we not forget the absolute tyranny that ravaged our nation just a year ago. Freedom of movement within and between states is constitutionally protected. The right of Americans to travel interstate in the U.S. has never been substantially judicially questioned or limited.

A 1941 U.S. Supreme Court case struck down California’s restriction upon the migration of the “Okies”— famously documented in “The Grapes of Wrath”— under the Commerce Clause. Another layer of protection comes from the Privileges and Immunities Clause sheltering U.S. citizens, who are each also the citizens of a state, against discriminatory treatment under the law of a different state.

Make no mistake: tyrants across the globe WILL continue to extend their authority and restrict the fundamental liberties on which our republic was founded. We need to stand up and speak out loudly against this incursion.

I believe that many patriots have opened their eyes since the oppression of the last year. We will not stand for more of this statist imposition.

Former Obama administration Health and Human Services Secretary Kathleen Sebelius said Tuesday on CNN’s “OutFront” that Americans who have not received a coronavirus vaccine should not be allowed to work or have access to children and be limited on where they are allowed to go.

They are coming for your family.

And these digital vaccine cards are only the beginning.